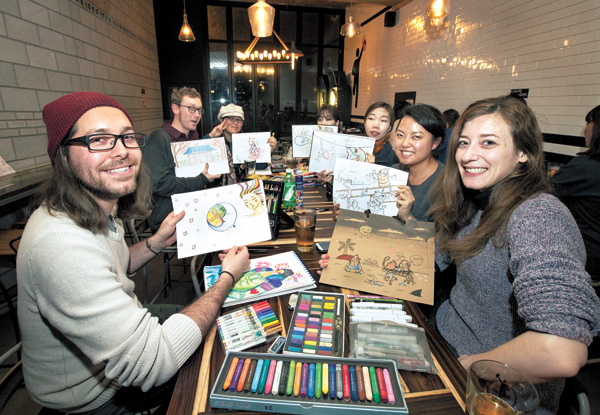 Members of Drink and Draw, an art group made up of Koreans and foreign residents, display their artwork during their latest gathering on April 5 in Guro District, southwestern Seoul. By Park Sang-moon


All eyes were on the eight people at the center of the bar.

Those eight faces hung down, those eight pairs of hands moved in all directions, with piles of coloring utensils in front of each person, from crayons and markers, to pastels and paint brushes.

The pack most definitely stood out on a recent Sunday evening in the two-story bar in Guro District, southwestern Seoul, which was filled with other customers who had nothing but bottles of beer on their tables.

Not that the difference or the spotlight meant anything to the group. Nothing really seemed to matter but the art work spread in front of them and the fact that they had to put their personal stamp on it in the next 10 minutes before passing it on to the next participant.

Known as the Drink and Draw, this group of Koreans and foreigners who call themselves art enthusiasts, meet every other Sunday night at Assi Pub Craft near Sindorim Station on subway line No. 1 for two hours of – literally – drinking and drawing.

Each person who signs up for the group’s meeting through its online website brings his or her sketchbook, along with other supplies to color or draw with, and sits in a circle to start outlining any kind of art piece, before passing it to the person seated to the right some 10 minutes later, depending on the number of participants.

The next person adds on to whatever he or she receives and continues passing it on until the initial piece returns to its originator.

“I think people generally come because they enjoy the low-key vibe,” said Kenny Gil, the Drink and Draw organizer. “Our members like to draw, and to be around people. For some people, drawing can be a really private thing, but here, it’s more like a community project.”

Eight members attended the latest gathering on April 5, including three foreigners, all Americans. Only two were men, and Gil admitted that the gender ratio was often slanted toward the female side.

Brendan Lattin, who comes from Seattle and teaches English here, said it was his first time with the group and that its greatest attribute was the absence of pressure.

“It was kind of a community sharing where you do something kind of silly, kind of fun, and you get to see people develop free association, meaning they look at something and respond to it in their own way,” he said.

Stephanie Talbert, from California, said it was her third consecutive time at the Drink and Draw, and noted that the sessions “renew” her feelings about the ups and downs in her life.

“Tonight was a really difficult time for me because I saw a dog get hit by a taxi yesterday,” she said. “I felt really stressed out and hopeless because my Korean is really bad and I couldn’t do anything about it. “I drew it as my drawing today and it came back as one of those nine tail foxes. People see something different in my drawings, and then I realize how therapeutic this whole thing becomes for me.”

Gil added on to Talbert’s praise for the variety of artistic perspectives, saying it was amusing to see the final product, especially after each person in the group got their hands on it.

“Each drawing grows, and there’s so many different elements added at the end that you never would have previously expected,” he said.
The group has yet to make collective use out of their final products, as each person takes home their own, but Gil said the group is planning to combine their previous work for an ephemeral exhibition of some sort.

No participation fee is required for Drink and Draw, though donations are welcomed to purchase art supplies for the group. Assi Pub Craft, the main venue for its Sunday night meetings, provides pizza, beer, cocktails, soft drinks, milk and orange juice, among other refreshments.