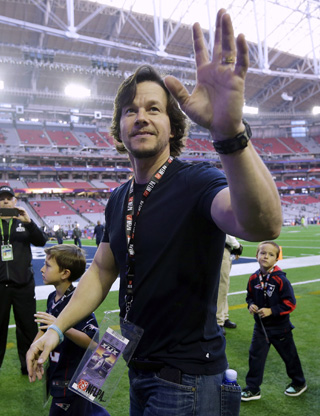 Actor Mark Wahlberg arrives at University of Phoenix Stadium before the Super Bowl XLIX football game between the Seattle Seahawks and the New England Patriots in Glendale, Arizona. Wahlberg plan to produce a feature film, “Patriots’ Day,” about the Boston Marathon bombing is getting a cool reaction in his hometown. Columnists, pundits and others say the pain and suffering caused by the 2013 attack is still too fresh and too real for the families of the three killed and the hundreds of people injured to think about making a movie. [AP/NEWSIS]

BOSTON - Two words: too soon.That’s the overwhelming reaction to actor Mark Wahlberg’s plans to produce “Patriots’ Day,” a feature film about the deadly bombing of the 2013 Boston Marathon.

Columnists, pundits and others say that the pain and suffering caused by the attack is still too fresh and too real for the families of the three killed and the hundreds of people injured to think about making a movie. Wahlberg, who grew up in Boston, is taking a beating.

“How does someone who markets himself as ‘a Boston guy’ not see that it is far too soon, that the city is still far too sad for its trauma to be transformed into mass entertainment?” wrote Eileen McNamara, a former columnist for The Boston Globe who now teaches journalism at Brandeis University.

Others questioned the timing of the announcement - two weeks before the second anniversary of the bombing and in the middle of the federal trial of Dzhokhar Tsarnaev, the 21-year-old who was convicted Wednesday in the attack and could be sentenced to death. CBS Films said the movie will be based on a firsthand account from former Boston Police Commissioner Ed Davis of the investigation and massive manhunt for Tsarnaev and his brother, who died during a gunbattle with police.

During the trial, marathon spectators gave heartbreaking testimonies about losing legs in the explosions or watching people bleed to death on the sidewalk. The father of the youngest victim - 8-year-old Martin Richard - described making the agonizing decision to go get help for his 6-year-old daughter, whose leg had been blown off, after realizing his son would not make it.

“The trial has served as almost a movie of the events itself, making the concurrent announcement of a fictionalized portrayal feel unnecessary and inappropriate,” wrote Charlotte Wilder of boston.com.

“Maybe one day, even someday relatively soon after the trial, turning the events into a film worthy of the story would help the healing and honor the lives of those affected,” she wrote.

“But for now, Wahlberg - who plays up his Boston roots whenever he gets the chance - picked the wrong time to break the news.”

Liz Norden, the mother of two sons who each lost a leg in the bombing, said it’s “way too soon” to make a movie about the attack and she believes Hollywood won’t be able to capture the agony of that day.

“I don’t think that could ever be re-created,” Norden said.

“I’ve sat in the courtroom with survivors and family members and seen what everybody is going through,” she said.

“It’s been two years ... but people who live it day in and day out, their lives are just coming back somewhat. For people dealing with putting legs on every day or people who lost loved ones, that doesn’t go away.”

Still, Norden said, if someone has to make a movie about it, it might as well be Wahlberg. “He’s from Boston,” she said.

Davis declined to discuss the movie with The Associated Press. He told The Boston Globe he turned down several earlier offers for movies and books. He said representatives of CBS Films told him they were going to make the movie anyway.

“Because I’m a public person, I didn’t have the right to stop them. I could either work with them or not,” Davis told the newspaper.

“I talked to them at length and I thought it would be better to have some input - to make sure that the depiction was done properly.”

Wahlberg’s representatives did not return calls or emails from The Associated Press seeking comment.