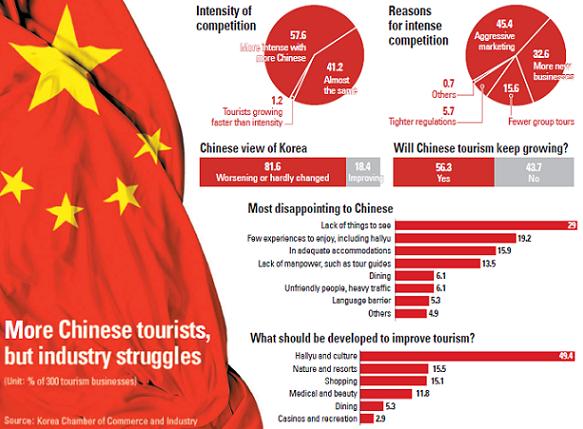 Chinese tourists today are everywhere from the streets of Myeong-dong in downtown Seoul to the posh neighborhoods of Gangnam.

But is the local tourism industry basking in wealth thanks to the ever-growing number of Chinese visitors?

No, according to a survey of 300 tourism businesses by the Korea Chamber of Commerce and Industry (KCCI). And while a majority in the industry expects the influx of Chinese to continue, nearly half thinks it will slow.

The survey showed that competition within the industry was heating up much faster than the number of Chinese entering the country, with aggressive marketing and new businesses eating into profitability.

A whopping 98 percent said they think competition among local travel agencies was either intensifying faster or on a par with the growth of Chinese tourists. Only 1.2 percent said otherwise.

Almost half (45.4 percent) said the intense competition was eating into profits, while 32.6 percent blamed the increasing number of new companies entering the tourism business. In addition, 15.6 percent said that as more Chinese tourists enter the country on their own instead of in groups, there is less work.

“This will only lead to more complaints and fewer tourists from China,” the official added. “Local companies need to refrain from excessive competition and concentrate on developing solid travel products.”

The industry is aware of the worsening image of Korean tourism.

In fact, 81.6 percent in the survey said Chinese tourists’ image of Korea was either worsening or remains the same, while only 18.4 percent saw it as improving. They also were less optimistic that Chinese tourism will continue to grow.

“To see the number of Chinese tourists to Korea increase to 10 million, there is a limit to the current tourism program that concentrates on shopping and is geographically limited to Seoul and Jeju Island,” said the KCCI official. “Companies need to create diverse programs that utilize leisure and cultural resources to attract Chinese tourists.”