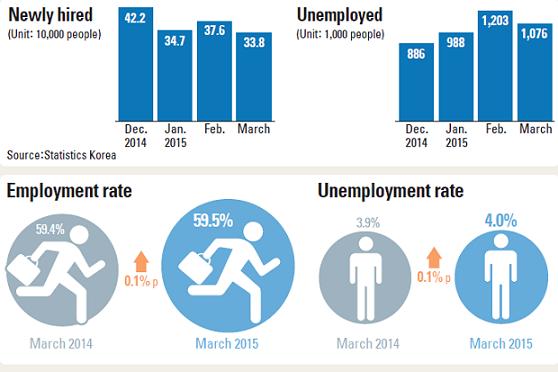 The number of newly hired employees last month accounted for the smallest increase in nearly two years, according to the latest data.

In March, there were 338,000 new hires, Statistics Korea announced on Wednesday, bringing the total number of employed to 25.5 million. The employment rate was also slightly improved from March 2014, up from 59.4 percent to 59.5 percent.

While it may appear that the Korean job market isn’t all that bad, the figure is actually the smallest since May 2013, when only 265,000 people landed new jobs.

Meanwhile, little has changed since the beginning of this year: The number of new hires has been stuck in the 300,000 range since then.

Last month, 52,000 people were recorded as unemployed, with the total number at 1.08 million. The unemployment rate was adjusted from 3.9 percent a year ago to 4 percent.

The reason the number of unemployed has risen, Statistics Korea said, is because the number of young people applying for jobs has increased.

Last month, the employment rate for those between 15 and 29 years old improved somewhat, from 39.5 percent in March 2014 to 40 percent last month.

Of most concern, however, is that the current situation appears unlikely to change anytime soon, with a recent survey showing that companies are unlikely to increase their hiring this year.

On Sunday, the Korea Employers Federation announced the results of a poll involving 377 companies with more than 100 employees.

Those organizations, it said, plan to reduce hiring by 3.6 percent compared to last year.

Nearly 40.9 percent of companies said they either have no plans to hire new recruits or are undecided, according to the poll - the highest rate since 2010, when 50.6 percent answered the same.

The primary reason for their reluctance was by and large the stagnant economy. By corporate size, conglomerates considered cutting down the number of new hires 3.4 percent compared to the previous year, when there was a slight increase of 0.5 percent.

The situation was much worse at small and midsize businesses. Last year, they reduced the number of new recruits 1.7 percent compared to 2013. This year, that cut has expanded to 6.5 percent.

Job opportunities for those with lower educational backgrounds are also expected get worse.

In 2014, conglomerates increased the number of new hires who had a college degree or higher. This year, those applicants have shrunk to 3.1 percent. Applicants with high school diplomas shrunk 1.5 percent last year, but may increase this year to as much as 8.5 percent.