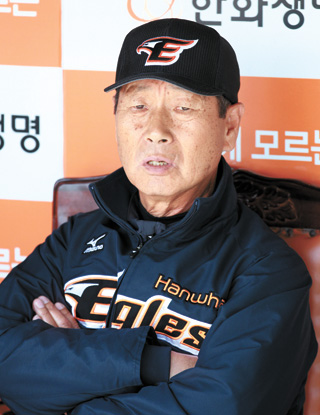 
Hanwha Eagles manager Kim Sung-keun is one of the most respected managers in Korea, as his nickname, “baseball god,” suggests.

But even before the league has finished a tenth of the season, Kim already thinks it might have been the wrong decision after two of his pitchers hit a Lotte Giants batter on Sunday and benches cleared.

“I’m saying this with a smile, but maybe I shouldn’t have returned,” he said before the game against the Samsung Lions on Wednesday. “It would be sad if Eagles fans turn their backs on us because of this incident. If that happens, I would not hesitate to quit tomorrow.”

Although being hit by a pitch is not uncommon in baseball, Sunday’s incident has been the talk of the town among baseball fans discussing who “ordered” two Eagles pitchers to hit Giants’ infielder Hwang Jae-gyun, first in shoulder and then in the middle of the back.

Kim, who won three Korean Series titles with the SK Wyverns, has denied he told his pitchers to hit the Giants batter from the bench, saying “baseball isn’t a war, but a sport. ” Nonetheless, he has been the target of criticism from fans and a fine from the KBO.

“I will take all the responsibility regarding this case, as players are dejected,” he said. “Because of this incident, I think my passion for baseball has cooled.”

The KBO on Wednesday morning suspended Eagles pitcher Lee Dong-kul for five games and fined him 2 million won ($1,837) for throwing intimidating pitches. Lee was on the mound when Hwang was hit for the second time in the game after two high and inside pitches.

Kim was fined 3 million won for failing to manage the team properly, the first time in KBO history that only one manager was punished in a beanball incident.

Furthermore, in a game between the Samsung Lions and LG Twins on Aug. 9, 2003, in which Lions hitter Lee Seung-yeop and Twins pitcher Seo Seung-hwa fought with each other, Lions manager Kim Eung-ryong and Twins manger Lee Kwang-hwan were both fined 5 million won.

Both cases involved a brawl between teams. On Sunday, there was no brawl, just a bench clearing.

“As the KBO made the decision, you have to accept it,” said Kim.

“When I returned to the field after four years, I noticed there are just too many things managers and coaches should not do,” he said. “I do have a lot of things to say regarding this issue, but I’m in a position where I can’t.”

Kim, who was a left-handed pitcher, explained that Hwang was hit because the 31-year-old right-hander was having trouble with his control.

“Before Hwang was hit, Lee kept throwing balls,” Kim said. “Catcher Heo Do-hwan was giving signs to pitch inside, which he likes to do.”

What seemed to especially hurt Kim was the comment by Giants manager Lee Jong-woon, who said, “I won’t tolerate anyone hurting my players. There are still 10 games left this season with the Hanwha Eagles.”

Kim declined to respond to the rookie manager’s comments.

“During the recent KBO managers meeting, people told me to take care of young managers, so I just want to keep my word,” he said.

As speculation rose that the beanball was ordered from the bench, the former OB Bears and Ssangbangwool Raiders manager said team captain Kim Tae-kyun wanted to hold a press conference to explain the situation, but he wouldn’t allow it.

“I told players not to talk about this controversy,” he said. “I take all the blame, as I have in the past.”

Kim said the incident has been hard on him, especially when his youngest daughter called him about it. And the Japan-born Korean added he has had difficulty sleeping and has been seeking treatment for stress.

“I returned for the sake of baseball and I really wanted to make some changes on the ground,” he said. “If I hurt my players and team, I feel deep responsibility.”