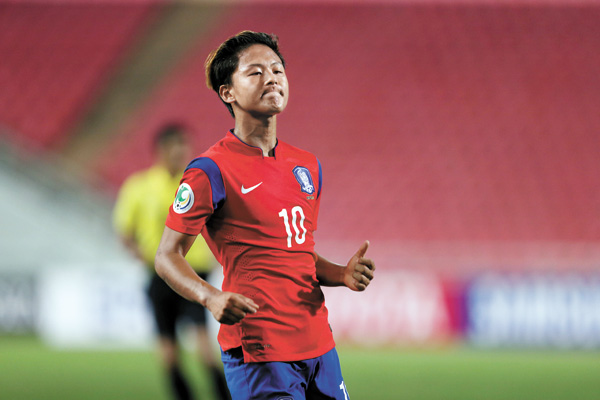 If former Manchester United midfielder Park Ji-sung represented Korean football to the world, 17-year-old Lee Seung-woo is the star of the next generation.

But the past and the future are set to collide this year. Lee, who plays for FC Barcelona Juvenil A, the under-19 team of Spanish football giant, is set to play in front of legendary Park for the first time at the 2015 Suwon JS Cup.

The international youth football tournament was created by the JS Foundation, where Park serves as president.

Lee, who will play for the Korean under-18 national team in the cup, said he is both thrilled and nervous to play in front of Park.

“I saw lot of Park’s game when he was playing and he always worked harder on the ground than anyone else,” Lee said to reporters on Wednesday. “At his event, I want to show him a good performance.”

Lee joined Barcelona in 2011 after performing impressively at the Danone Cup in South Africa while playing for Daedong Elementary School. But he has not been able to play an official game with his club since last year, when FIFA punished the Catalan football club for violating international youth transfer rules. Lee will be able to play with FC Barcelona from next January, when he turns 18.

“I did continue training, but since I haven’t played in a competitive game in nearly eight months, I can’t tell how sharp I am right now,” he said. “I will get rid of any pressure and just enjoy the tournament.”

In the AFC U-16 Championship in Thailand last September, Lee was named MVP and was the top scorer of the tournament, while leading Korea to second place. He is now preparing to improve his condition for the FIFA U-17 World Cup in Chile in October.

“For the remaining time, I will train hard with fellow national team members,” he said.

Lee is often dubbed “Korean Messi,” referring to FC Barcelona’s Argentine superstar Lionel Messi. The Suwon-born footballer said that he is honored by the nickname and hopes to play with the real Messi in the future.

“Messi is the world’s best player and watching him play inspires me to dream bigger,” Lee said. “I want to become a great player like him and win the FIFA Ballon d’Or.”

If Lee wants to break Kim’s record, he needs to be selected by coach Uli Stielike and play a match before September.

“Playing for the national team has been something I’ve dreamed of for a long time,” he said. “If I get the call, I’ll be ready.”

Meanwhile, the JS Cup will be held from April 29 to May 3 at the World Cup Stadium in Suwon, Gyeonggi, with teams from France, Belgium and Uruguay. Lee, along with his Barcelona teammate Paik Seung-ho, will train with the U-18 team led by coach An Ik-soo from Sunday at the National Football Center in Paju, Gyeonggi.