Water pricing is a work in progress, says Braga

Water pricing is a work in progress, says Braga 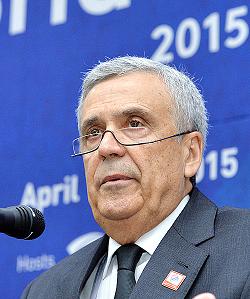 Water is an undervalued resource, and efforts to accurately price water for all users must be undertaken worldwide. That push, World Water Council Chairman Benedito Braga says, is necessary to combat overconsumption at a time when climate change is making water increasingly scarce.

“Why is gold so expensive?” he said in an interview Wednesday during the 7th World Water Forum in Daegu and Gyeongju. “It’s due to high demand amid limited availability. It’s the same with water. If there is a scarcity of water, then you have to put the right price on it in order to encourage everybody to use it in a very parsimonious, efficient and rational way.”

According to Braga, national governments should implement both tariff and tax systems, in which the central government takes partial responsibility for water fees.

He added that costs for the price of industrial water use should be higher than what it is now, and that it is the government’s job to take the political risks to push a strict policy to that end.

The following is an edited excerpt from the interview:

Q. Water is a limited resource, just like all others. How can the WWC play a role in getting the private sector to change its business philosophy in valuing water?

A. How can we pursue economic development while conserving the environment? You will appreciate that most of the development success stories in the world have developed economically first and then found the resources to restore the environment. This is the case in Korea; the Han River is a very good example. After you became well-to-do, you used valuable resources because it is expensive to take [environmental conservation] measures.

So there is a synergy between economic growth and a better environment. Economic growth leads to social growth, a better-educated population and a situation in which the environment becomes more and more important and people become highly focused on conserving it. So, I don’t see any problem with both concepts being implemented at the same time.

The private sector will understand the importance of water if it is priced right. The correct signal to send is that a resource has a high price because it is precious. Why is gold so expensive? It’s due to high demand amid limited availability. It’s the same with water, If you have a scarcity of water, then you have to set the right price in order to encourage everybody to use it in a very parsimonious, efficient and rational way.

And the private sector these days understands that water must be in their business plan, as well as transportation and other components of a product’s price. So, the way that the private sector will understand the importance of water is by having economic instruments give a signal to them that this is a precious resource that has to be used in a rational manner.

In Korea, the government sets industrial-use water at a lower price than commercial or household water.

Industrial water should be priced at the right level. How do we find a right price of water?
We need to compute the costs of operating and maintaining the [water] system so that you can provide good quality water to the consumer.

You also have to think about the future, because even if you provide a good service today, what about in a decade or two? Be attentive to the question of whether water revenue today is sufficient for me to increase the infrastructure necessary to continue producing the service. Then, you discount all this [at today’s prices], and you have the right tariff.

Sometimes this tariff may turn out to be pretty high, and governments sometimes are afraid of levying high tariffs because it is politically not a good move. But if you don’t have the right tariff, then you have to have some taxes that everybody pays, not only water consumers, but [taxes] which are necessary to cover the expenses of expanding the system. So the system must grow in line with either tariffs or taxes.

Of course, both are inconvenient for the government. Now, it’s much better that a small group [the private sector] pays rather than have general consumers pay for water. It is ethically more correct, because they are benefiting from the service, so they are the ones that should be paying for it, not the whole population through income taxes, for example.

What is the World Water Council’s role in addressing water issues at the UN Sustainable Development Goals conference late this year?

Back in 2012, the WWC launched at the 68th General Assembly a proposal for a water security pact for all member states to sign, which would be an understanding by member states that water plays a definite role in the hygiene and health of people and that each country has to provide safe drinking water and sanitation. So water security is a population with safe drinking water and sanitation, and it is also about recognizing that water is central in producing food via irrigation. Irrigated water is much more productive than rainwater in agriculture. So if we want to feed a growing population, we have to have water security, which implies food security.

Water can be used to improve human health, hygiene, economic development and social development through hydro power, producing energy and food and using water as transportation.

The United States, for example, has a large inland navigation system that makes their food production easily exported to different parts of the world at a very low price. Inland navigation is the cheapest transport system by far - a lot cheaper than roads and railways. All the freight costs are much lower. If you use water in business, then you won’t pollute the water and you have ecosystem security. That is why water security is so important, because it helps humans, socioeconomic development and the ecosystem. This is how we see the issue of water.

The SDGs are the most central element, and this is what we explained in New York in 2012. I kept reiterating this from then on, in 2013 and 2014. So I hope with the 7th World Water Forum in Korea, which is giving us lots of ideas and contributions from a large number of stakeholders from all over the world, we will have a very clear message. All governments in the world have to have a goal on water ? to pursue water security ? considered in the SDGs.

The 7th World Water Forum only has one more day to go. How would you evaluate it?

We had very interesting sessions and high-level panel discussions. In particular, some of the interesting sessions that discussed important subjects were on economics and the financing of water security, water and food security, the water-food-energy nexus to see how a river basin can turn out with different uses, and the issue of trans-boundary water management with its complex geopolitical implications.

It is our hope that the 7th forum’s theme - getting what’s discussed implemented in each participant’s country - will be strong. So, each coordinator for parts of the 16 main subjects discussed here are now proposing a roadmap to figure out how to develop the discussed materials for the next forum in Brazil, during which some of the ideas suggested here will be actually implemented in the real world.

For example, when it comes to financing water managements and related infrastructure, we will encourage our member countries to make good use of those recently created multilateral banks such as the China-led Asia Infrastructure Investment Bank and the BRICS-led New Development Bank.

So we’ll be following how these proposals here have been implemented and how many countries have been financed from these institutions and had success with this financing.