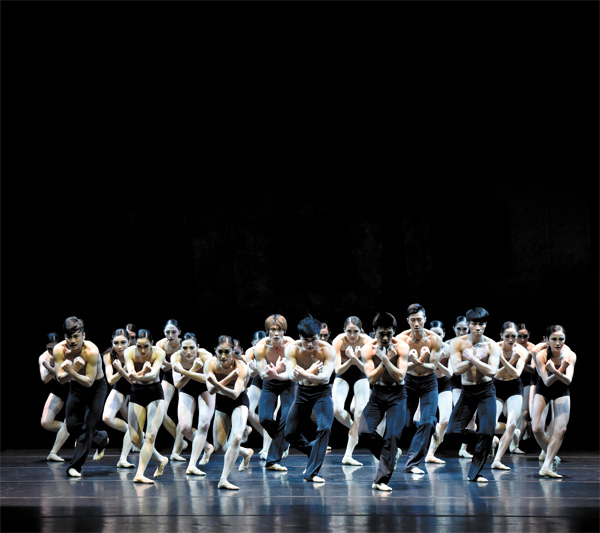 There are only four ballet theaters in Korea that provide major insurance benefits to their members: the Korean National Ballet, the Universal Ballet, the Gwangju City Ballet and the Seoul Ballet Theatre (SBT).

But the SBT is the exception to the rest - which are either operated on the national or municipal level - and has carried on over the last two decades on just the bare minimum.

The SBT has “barely been able to make ends meet for the past 20 years,” said Kim In-hee, the ballet’s general director. “[It has managed] solely on the profits from performances and a little sponsorship from citizens and the government.”

This year marks the theater’s 20th anniversary, and Kim and her husband James Jeon, the artistic director and the ballet theater’s resident choreographer, said it’s a “miracle that we’ve come this far.” 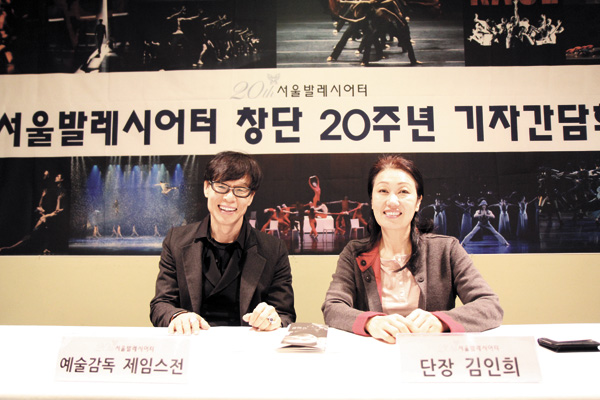 In the beginning, SBT only made a profit in the first two years, and has run in the red ever since.

“In the winter of 1994, eight people, including James and I, got together with a simple idea: Why don’t we create our own ballet?” Kim said. “I still remember we got together at our apartment one night in November and decided to just establish a ballet company. After three months, on Feb. 19, we had the inauguration ceremony. I mean, how imprudent were we to just jump in like that?”

At the time, both Kim and Jeon were at their peak as dancers.

Kim went to Monaco in 1980 to study at the Les Ballet de Monte Carlo. But after learning that her parents were working in a market and living in a windowless, unlicensed building, she decided to quit her schooling and joined the Universal Ballet Company.

Jeon, a Korean-American, graduated from Juilliard and was a member of the Florida Ballet until coming to Korea in 1987 and joining the Universal Ballet Company as a guest member. It was there where he met Kim, and after becoming life-long partners, they also became principal dancers at the Korean National Ballet in 1994.

The couple started off well, renting a large studio in luxurious Gangnam, in southern Seoul. However, they were soon forced to move and ended up in Gwacheon, Gyeonggi. But despite their ups and downs, Kim said SBT was able to come this far as a private yet operable ballet company because it has its own resident choreographer as the artistic director.

“It’s really a strength to have the chef in the kitchen,” Kim said. “This allows the ballet company to create a lot of its own work while at the same time saving on production costs.”

“Plus, we don’t have many male dancers, so I make him go on stage as well. Also since he’s my husband, I can save a lot on personnel expenses and production costs,” she chuckled.

Ballet in Korea has a short history: It’s been more than 50 years since the Korean National Ballet was founded. But now, Kim believes, the country should be proud of its successes.

“In Europe and the U.S., most of the ballet companies now have at least one Korean dancer as their principal,” she said. “I believe it’s time for Korea to focus on nurturing choreographers, leaders of the arts industry and educators.”

Indeed, Korea has been making efforts to nurture choreographers in recent years. But according to Kim, it’s not systematic at all.

“I’ve seen many freelancers receive funding [to foster their choreography and projects], but nine out of 10 of those recipients say they went into debt after staging their shows,” she said. “Although they receive support, they don’t have a practice room or dancers to partner with, stage designers to work with or costume designers. Unless their parents are rich, they have to borrow more money from the bank.”

It would be more valuable, Kim insisted, if such choreographers were connected to private ballet companies like SBT that are already equipped with practice rooms, dancers and staff to effectively support them.

At SBT, Jeon is trying to encourage its dancers to take part in the choreography process as well.

“For the upcoming Suwon Ballet Festival in August, I asked the dancers if anyone was interested in choreographing new work,” he said. “Two to three dancers showed interest and began to work on it.”

With more choreographers in SBT, Jeon and Kim hope to put on 100 additional productions until the company’s 30th anniversary.

“For the past 20 years, we’ve managed to create 100 modern ballets and have staged 980 performances. We also managed to export several of our projects to international ballet companies,” Kim said.

“Adding 100 more to that list is our goal for the next 10 years, and I know James can’t do it by himself, so we must support more young choreographers.”

“Even though we are a private ballet company, we are proud that we can maintain the tradition of creating new work,” she added. “Roy Tobias, who was a student of the legendary choreographer George Balanchine, was our first artistic director; and now, his student, James Jeon, is the next artistic director and resident choreographer of our ballet theater. We will continue to pass down this passion of creating contemporary ballet.”

To celebrate its 20th anniversary, SBT has already announced its line-up for the year, under the slogan “Bravo SBT.”

The program includes, “Rage,” created last June at the LG Arts Center, and SBT’s major work, “Being,” to debut in October at the Seoul Arts Center.

It also features a joint performance with the Basel Ballet Company of Switzerland entitled “Moves,” performing in September in Gwacheon and at the National Theater of Korea in Seoul.