Social issues are at heart of Suh show

Social issues are at heart of Suh show 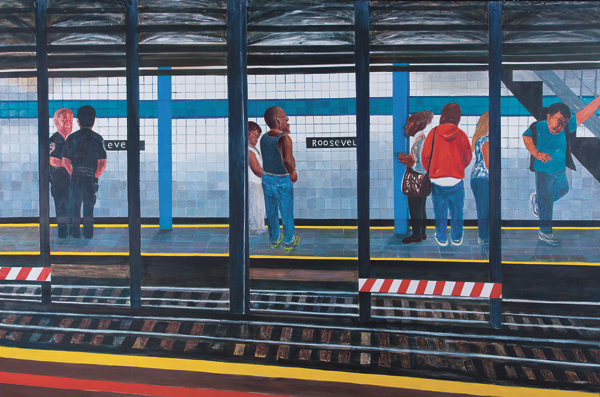 Suh Yongsun’s painting “Train Roosevelt Station”(2013-15).Provided by the museum and the gallery.

A large installation measuring 5.85 meters in width currently hangs on the first floor of the Kumho Museum of Art. The wooden panel carved and painted by Korean artist Suh Yongsun, 64, depicts the Sewol ferry disaster, in which 304 people perished last April, and other social and political issues.

The piece could remind viewers of so-called “people’s art” which peaked in Korea in the 1980s. At that time, the local art scene was divided into two utterly different groups - abstract art led by the dansaekhwa movement and people’s art, which dealt with political issues rather literally in figurative forms.

But Suh’s paintings on the museum’s second and third floors, which depict the various urban scenes including those in the subway and on the streets, seem to be closer to German Expressionist work than to the Korean people’s art. The unique red and yellow colors they feature also distinguish them from European Expressionist paintings.

Suh’s work underlines his unique position in the Korean art scene. He was often categorized as a people’s artist in the 1980s. But at that time, unlike others entrenched in this genre, he focused more on historical and mythological themes.

Since then Suh has steadily developed the theme of urban scenes by using bold colors and brush strokes. His latest among these paintings are currently exhibited at the Kumho Museum and Hakgojae Gallery, located in the art zone east of Gyeongbok Palace.

The rare solo show that takes place across a museum and a commercial gallery is titled “Utopia’s Delay: the Painter and the Metropolis.”

In the Kumho Museum, 27 paintings, 44 wooden sculptures and 9 drawings by Suh are exhibited while visitors can see 16 paintings and two drawings at Hakgojae. 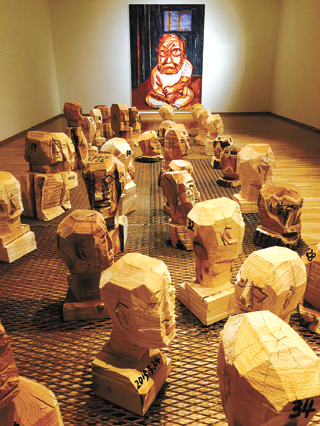 Suh Yongsun’s painting “In Thinking,” on display with a group of his sculptures in the “Head” series at Kumho Museum of Art are part of the 64-year-old artist’s solo show about contemporary urban scenes. Provided by the museum and the gallery.

Many paintings are set in subways or on buses in the various cities the artist has traveled through, including Seoul, Beijing, New York, Berlin and Melbourne. People with expressionless, mask-like faces are indistinguishable from one another in these works.

“We, passengers, have to be in the same space for a while, though we are moving to different places for different purposes,” the museum quoted Suh as saying in his Oct. 31, 2010 diary.

“We have to face strangers, so we act like players of pantomime ... we read newspapers, pretend to see ad campaigns or see our mobile phones ... All these acts are carefully made, as we are conscious of the unspecified masses in the closed space that we share.”

The artist also told reporters at a press preview last week, “When I paint people, I come to reveal their universal existence rather than their individual characteristics.” 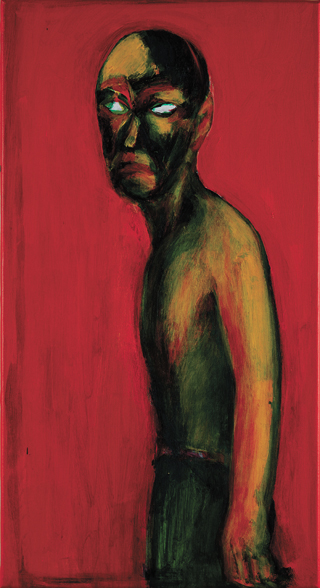 Suh Yongsun’s painting “Seeing”(2013), on display at Hakgojae.Provided by the museum and the gallery.

“Berlin was the most impressive, as it made me think of a future Seoul after the unification of the two Koreas” he continued. “But the most interesting city was New York.”