Q1 seems to confirm Korea is in low growth

Q1 seems to confirm Korea is in low growth 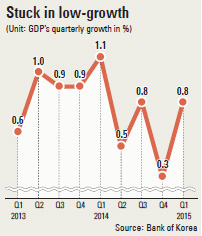 Economic growth in the first quarter continued to remain below the 1-percent barrier, fueling fears of long-term stagnation in Asia’s fourth-largest economy.

The Bank of Korea announced Thursday that the economy grew 0.8 percent in the first three months compared with the previous quarter. That was an improvement over the 0.3 percent quarter-on-quarter growth reported in the last three months of 2014.

Year-on-year the economy grew 2.4 percent, which is the lowest rate in two years.

The last time the economy grew so slowly was in the first three months of 2013 when it grew 2.1 percent compared with the previous year.

Near-zero quarterly GPD growth has continued for four consecutive quarters since it retreated to a 0.5 percent quarterly growth in the April-June period last year when consumer sentiment contracted after the unexpected tragedy of the sinking of the ferry Sewol. Ever since, the economy has had trouble getting back on its feet despite various stimulus strategies tried by the government.

Consumption in the private sector was still sagging, the BOK report showed, inching up a mere 0.6 percent from the previous quarter. Private consumption growth has been lingering in a range of 0 to 1 percent over the past year, except the second quarter of 2014, when it shrank 0.4 percent.

With stagnant consumption in both the public and private sectors, investment by companies on facilities posted zero growth in the first quarter.

A notable increase in investment was only seen in construction, which rose 7.5 percent quarter-on-quarter, boosted by the government’s easing of regulations in the real estate market.

Although the gross domestic income (GDI) posted a 3.6 percent quarterly increase, it was mainly driven by falling global oil prices, according to the BOK.

“Prices in imports plummeted at a faster pace than those of exports, improving conditions of trade [for Korea],” said Jeon. “The GDI was also affected by the plunge in global oil prices.”

The Korean won’s appreciation against the U.S. dollar and yen resulted in a slump in sales by Korean exporters.

In the first quarter of the year, the BOK report said, Korean exports fell 0.4 percent quarter-on-quarter.

Korean exporters said the weakened dollar and yen are eroding their price competitiveness in trading.

Samsung Electro-Mechanics earns about 92 percent of its 7 trillion won ($6.5 billion) in total sales from exports. It recently surprised industry observers by announcing many layoffs of senior executives, mainly because the weak yen hurt its exports to Japan.

After the expansionary monetary policy of Prime Minister Shinzo Abe lowered the value of the yen against other currencies, exports by Samsung Electro-Mechanics slumped by 1.5 trillion won in 2014.

Hyosung Group, another big Korean exporter, also saw a drop by 3 percent in total sales in 2014. Competitive in textiles and heavy industry, the group earned 73 percent of total sales from exports.

“A strengthened won is a big worry for us, as we have lots of exports,” a Hyosung Group representative told the JoongAng Ilbo.

According to statistics released by the Institute for International Trade under the state-run Korea International Trade Association this week, 38 percent of 159 Korean exporters - whose exports accounted for more than half of their total sales - said they could not pay back even the interest on their debt.

According to another report from the BOK on Thursday, sales of Korean companies fell in 2014 year-on-year by 1.5 percent on average.

The report, titled “An analysis of 2014 corporate business management,” surveyed 1,536 listed and 195 unlisted companies in Korea. The annual report showed that the average sales growth of the companies in 2014 was the lowest since it was minus 0.1 percent in 2009.

The drop in sales was mainly in manufacturing, such as automobiles, shipbuilding and consumer electronics, the BOK report said. Manufacturers’ average sales growth was lower than other industries at minus 2.5 percent.

Stuck in the low-growth trap, the Korean economy appears to be following in the footsteps of Japan, which suffered low growth for its so-called Lost Two Decades since the 1990s, a report by the Federation of Korean Industries (FKI) released Thursday said.

In a report titled “Korea’s 3-percent economic growth, a bellwether for crisis,” the federation, a major association of business executives in the country, listed 10 signs showing that the Korean economy is heading to stagnation.

All kinds of economic activities - domestic consumption, investment, government spending and exports - have slowed in Korea while the low growth trend is settling as a “new normal,” the report said.

The FKI pointed out that shrunken consumption among affluent Koreans has contributed to dragging down the domestic economy, while the public sector has reduced investment because of its high levels of debt and tax revenue shortfalls.

Also, due to the yen’s depreciation and an appreciating won, exports have slowed and exporters face falling profitability.

“Red lights have started blinking in all areas of the Korean economy,” said Song Won-geun, head of economic affairs at FKI. “Korea’s economic slowing seems exactly the same as in the Japanese economy in its early stage of its lost decades.

“Traditional monetary policy like lowering interest rates and quantitative easing are not enough for Korea to escape the low growth trend,” Song added. “A fundamental and major change is needed to reinforce the strength of the Korean economy by boosting the efficiency of labor and exploring new markets and business items.”