Won’s strength against the yen starts to hurt

Won’s strength against the yen starts to hurt 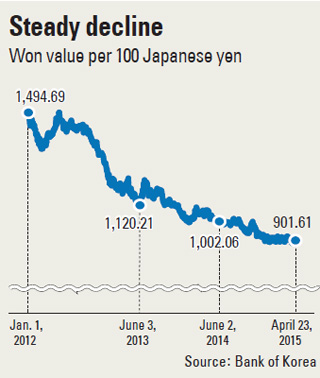 A prolonged rally has pushed down the won-yen exchange rate to one of the lowest levels in more than seven years, prompting concerns about the effect on Korean exports and services overseas.

On Friday, the won ended trading at 903.26 won per 100 yen, barely managing to stay above the psychologically significant 900 won and looking set to fall below 900 won for the first time since early 2008.

Analysts say it is only a matter of time before the won-yen exchange rate dips below 900 won. 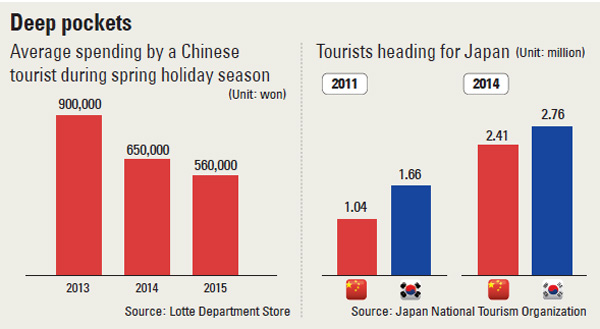 Bank of Korea Gov. Lee Ju-yeol also stressed to the media recently that “the velocity of yen’s weakening was very fast,” admitting a weaker yen could significantly affect the Korean economy.

Industries that are sensitive to currency values such as automakers, shipbuilders, tourism and even retail look set to be hurt by the weaker yen, as a stronger won hurts the price competitiveness of Korean goods and services compared to their Japanese rivals overseas.

Industry analysts say overseas consumers have already started to turn away from Korean goods and services in favor of Japanese and that’s showing up on the profit and loss statement of Korean giants.

Hyundai Motor said earlier this week that its first-quarter operating profits fell 18 percent year-on-year. Its global deliveries declined 3.6 percent in the quarter, according to a regulatory filing on April 1.

In contrast, Toyota’s first-quarter U.S. sales rose 10.5 percent, which helped it expand its U.S. market share to 14.6 percent from 13.9 percent a year ago.

“A weaker yen [compared to the won] has negatively affected Hyundai Motor’s car sales abroad, particularly in emerging countries where consumers are more sensitive to pricing,” said an analyst at a local brokerage who declined to be named.

“If this trend persists, Hyundai’s sales will inevitably be affected negatively,” he added.

Shipbuilders are seeing their Japanese competitors steam ahead. Japanese shipbuilders are placed No. 1 globally in terms of the number of ship orders for the first time in seven years, industry data shows.

The tourism industry and retailers are visibly affected by the weaker yen as both Chinese and other Asian tourists including Koreans are increasingly choosing Japan as their travel destinations, lured by the prospect of less costly shopping and cheaper tour packages and expenses.

In the first two months of this year, Chinese visiting Japan jumped 99.2 percent year-on-year, with February’s number reaching 450,000 visitors, nearly four times the number of Chinese coming to Korea during same month, which was 120,000.

The number of Japanese tourists coming to Korea in the meantime has declined since a weak yen makes it more expensive to go overseas.

In all of 2014, the number of Japanese visiting Korea fell 17 percent year-on-year. In first three months of this year, the numbers declined 17.7 percent, Korea Tourism Organization (KTO) data showed.

“If the yen’s weakness persists, we could see the influx of Chinese tourists into Korea slow down compared with Japan,” Lim added.

Meanwhile, Chinese tourists, who have been a breath of fresh air to troubled local retailers, are spending less money in Korea.

This is a 38 percent drop in two years.

In contrast, an average Chinese tourist in Japan spent 2.15 million won during his or her visit in Japan last year.

“Chinese tourists are big spenders, and we have been happy to serve them,” said a clerk at Lotte Department Store duty-free shop in central Seoul.

“I hope many of them keep visiting our country, because otherwise, we are going to see fewer shoppers around here,” she added.