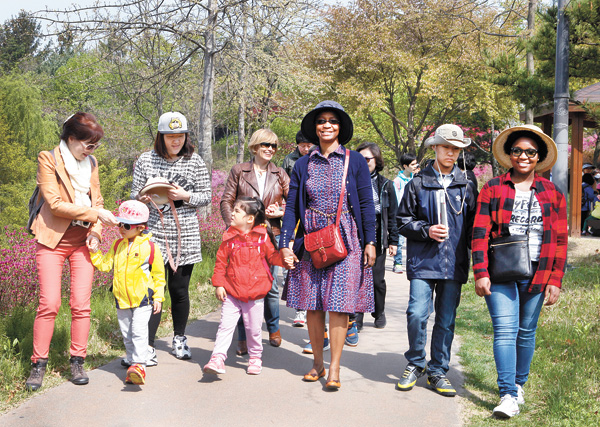 Members of Planting Love, a local fund-raising organization, walk with students of the St. Mary School for the blind at the Hoam Reservoir Ecological Park in Chungju, North Chungcheong, last Wednesday. At the center is Chisanga H. M. Kapumpa, the wife of the Zambian ambassador. By Park Sang-moon

Five members of the Ambassadors Spouses’ Association in Seoul (ASAS) accompanied a local charity organization on a trip to a Catholic school for blind people in Chungju, North Chungcheong, last week, to take part in an annual spring walk.

The three-hour excursion for students at the St. Mary School for the blind was organized by Planting Love, a fund-raising group that celebrated its 25th anniversary with a charity bazaar earlier this month at the Grand Hyatt Seoul in Yongsan District, central Seoul.

Planting Love works hand-in-hand with the Sisters of Charity of Seton Hill, focusing on fund-raising events for two schools run by the latter Catholic group: Eunhae School for people with physical disabilities in Gwangju and the St. Mary School for the blind.

“It’s my first time coming in contact with the blind,” said Quinteiro, adding that it was a rich experience to walk around Hoam Reservoir Ecological Park with her partner, a young boy.

“Sometimes, you don’t need to speak in order to bond,” she said. “I used to volunteer at orphanages with the newly born, and even though they couldn’t see me or talk to me, we connected through the sensation of touch.”

Mwila Kapumpa, 18, the daughter of the Zambian ambassador who came on the trip with her mother, said she was glad to get out of the house.

“I have a blind cousin, so it was very nice to be around them in this lovely weather,” she said. “I’m a social person and I like talking to people, so I didn’t like the whole fact that I couldn’t really talk with him. But it was okay, because we exchanged a few messages through his teacher.”

Oh Kwang-shim, the director of Planting Love and a nun at the Sisters of Charity of Seton Hill, said the annual trip to the St. Mary School for the blind was meant to allow committee members of Planting Love to meet the beneficiaries of their hard-working charity efforts.

“As a Korean, it really overwhelms me seeing their heartfelt efforts, and to see them leave Korea after their husband’s tenure, feeling a sense of achievement.”