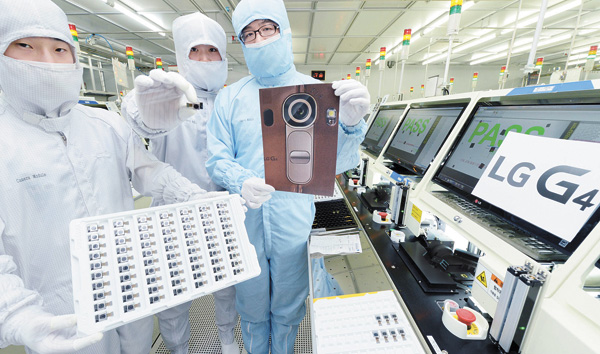 LG Innotek employees hold a box of G4 camera modules and an enlarged picture of the camera at the company’s manufacturing and testing facility in Gwangju. Provided by LG Electronics

GWANGJU - I was covered from head to toe in a vinyl suit, with boots up to my knees and two layers of fabric covering my face. By the time I’d finished dressing, only my eyes were exposed - and that was just the beginning of the odyssey.

I would be checking out the much-touted cameras on LG’s new G4 smartphone, and it was clear that while I was welcome in the LG Innotek facility in Gwangju, even the tiniest particle of dust would not be.

It was only after being “air washed” by gusts of wind in a metal chamber, stepping on a sticky mat, washing my already double-gloved hands and rolling my body with a lint roller that I was actually allowed to enter the room where the manufacturing and testing takes place.

If the extra precautions are any indication, LG is taking no chances with the G4, slated to make its commercial debut on April 29. The device is the latest in LG’s smartphone line, which has otherwise disappointed consumers in performance and sold poorly before G4 predecessor G3.

But LG is hoping to leave its competitors in the dust with the camera on the G4, which the company says offers DSLR-level performance and the lowest aperture of that on any smartphone.

After making it through the cleaning process, I was allowed to walk down a narrow hall to where robotic arms were busily attaching the camera lens, roughly the size of a finger nail, onto the camera module to be installed in the device.

A LG Innotek employee said the majority of the processes were automated to increase not only efficiency but also accuracy, which is essential in guaranteeing the quality and accuracy of the camera lens. Not even a speck of dust is permitted as the manufacturing space is a “clean room,” meaning it has less than 10 dust particles whose size is no larger than 0.0005 millimeter each.

To improve production and quality of the camera module, LG Innotek developed a new manufacturing process called Advanced Active Align, which has improved the precision of the assembly process by 40 percent compared to the previous system.

We moved from the manufacturing area into the testing room, where people in protective suits were placing the camera modules under a microscope. A nearby screen showed whether the camera could still focus on a crossed line after being shifted in different directions. If the camera could focus, the screen would blink the word “pass” in big green letters. If the camera couldn’t perform, it was indicated by a bright red “failure” on the screen. 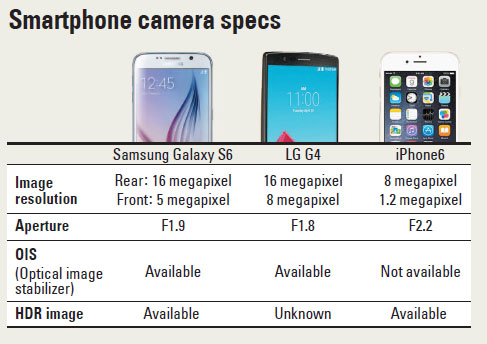 Another machine tested the cameras’ color calibration, using the same signals to show whether the devices were up to par.

The testing technologies were developed by LG Innotek and LG Electronics in 2013 and took six months to create.

The Korean tech company has created buzz around its latest smartphone by keeping the actual appearance of the device shrouded in mystery. The company has only released a picture of the back of the device, exposing the camera, but there are speculative images of the G4 circulating the internet. LG has, however, announced that the device will have interchangeable covers, allowing users to switch between a plastic and leather option.

“The camera on the G4 is almost as good as a DSLR,” said Yoo Dong-guk, a senior researcher on the camera module development team at LG Innotek. He said his team focused on creating the first ever 1.8-aperture lens for a smartphone, as well as boosting the resolution of the device’s two cameras. The G4’s rear-facing camera is 16 megapixels, while its front-facing one is 8 megapixels.

This makes the G4’s cameras more advanced to those on both the iPhone 6 and Samsung Galaxy in both resolution and aperture.

A lower aperture can improve low-light performance, and can also improve portrait shots by rendering the background blurred with the facial area in focus. 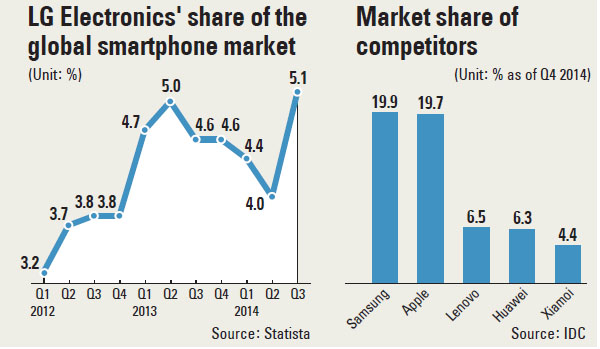 The camera also offers some manual controls that used to be reserved for professional-grade DSLR cameras. A user can control shutter speed, white balance and ISO, making G4 the first smartphone to provide such functions.

So why focus so much on its camera? The target is customers who love to take selfies.

There was a time when mobile phone’s sole purpose has been making or receiving calls. Today, however, people most commonly use their devices to spend countless hours on social networking services like Facebook and Instagram - where posting a selfie is common practice.

Consulting firms such as Deloitte project that one of the key elements for consumers in choosing their new smartphones will not be what software or apps they have, but rather the quality of the camera lens and the resolution of the images they can post online.

The success of the G4 is crucial for LG, which in recent years has been struggling to regain its past smartphone supremacy. Before smartphones dominated the global market, LG Electronics was one of the top-three mobile phone manufacturers, along with Nokia and Samsung.

But the company was unable to adapt as successfully to the smartphone era as its competitors. While Chinese smartphone vendors like Lenovo and Huwei are boosting their global sales, the Korean tech company is still struggling to keep just 5 percent of the market.

The company’s situation improved slightly with the modest popularity of its earlier G3 model, but it hopes the G4 will bring it back into the top spot by catering to the growing population of amateur shutterbugs. The company is even promoting the device in partnership noted photographers like National Geographic’s Colby Brown, whose photos taken with the device are available on LG’s website.

But despite the device’s new features, analysts warn that LG Electronics will find it hard to achieve a significant sales growth amid other premier smartphones like Apple’s iPhone 6 and the Galaxy S6 series by Samsung Electronics.

“It’s true that LG made progress on the camera feature,” said Greg Roh, a chief researcher at HMC Investment Securities. “But we need think about the G4 alongside the Galaxy S6 series and iPhone S6. LG’s device lags behind the two phones when it comes to design and specifications other than the camera.”

The G4 reportedly uses Qualcomm’s Snapdragon 808 chip, defying expectations that the company would use the newest and fastest 810 model.

Furthermore, as the latest devices by Apple and Samsung Electronics have made their own improvements to their cameras, LG’s innovations could look less attractive to consumers, the analyst added.

“At a time when people are taking great interest in the iPhone’s larger screen and the Galaxy Edge’s curved display, the G4 lacks a truly innovative feature to attract attention.”

Jin Seong-hye, an analyst at KTB Securities & Investment echoed the prospect. “It will be difficult for LG to take customers away from Apple or Samsung,” she said.