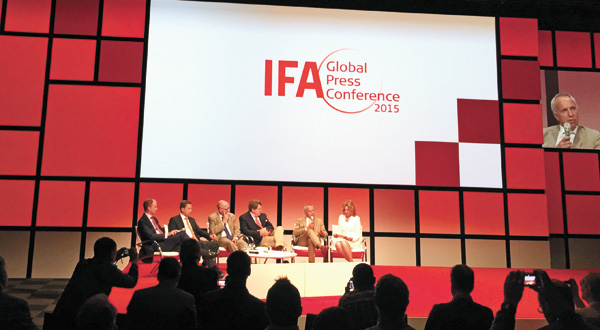 MALTA - Connectivity has been the buzzword for the home appliances market in recent years and it is materializing into actual products and becoming relevant to ordinary people under the connected home or connected living theme.

With telecommunications playing the key role in connecting different devices at home, the IFA, the world’s largest electronics fair in the second half of the year, will feature Korea’s top mobile carrier SK Telecom as an exhibitor for the first time.

“We see a stronger area for telecommunication industry because telecommunication is the connector for the connected home, and we see it rising as a topic,” said Jens Heithecker, executive director of the IFA, in an interview Saturday on the sidelines of the Pre-IFA Global Press Conference.

“We have decided to participate in the IFA to leap in as a business operator of next-generation platforms such as the Internet of Things,” said a spokesman with SK Telecom. The company plans to display wearable devices related to health care and smart home products at the electronics fair that is five months away. 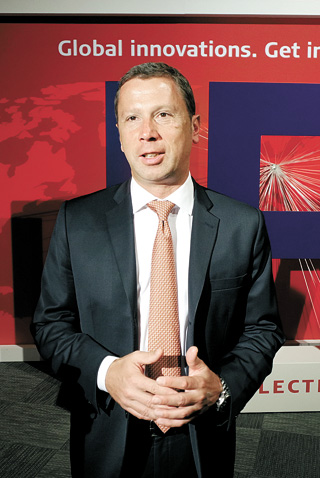 Despite often being compared to the Consumer Electronics Show held in January in Las Vegas, IFA has traditionally emphasized home appliances and the presence of a telecom operator represents a fresh step. Other participants in the communications sector for this year include China’s telecom equipment producer ZTE and British telecom provider Vodafone.

IFA, short for Internationale Funkausstellung Berlin, is one of the oldest industrial exhibitions in the world. Held each September in Berlin, the event is co-organized by the GFU, a German industry association, and Messe Berlin, a leading trade fair company. It is scheduled for Sept. 4-9.

Pre-IFA is a journalist-only event that takes place in April at locations across Europe. It offers various industry predictions and market trends with an emphasis on electronic appliances and a sneak peek into what the main event of IFA scheduled will look like. This year, more than 300 journalists from over 50 countries attended the three-day event held Thursday through Saturday.

Korean companies have been the main participants in the show, Heithecker said, and he is happy to attract more “small yet very innovative” companies this year, without elaborating further. The list of companies is still in the discussion stage except for big names such as Samsung Electronics, LG Electronics and SK Telecom, but there will be several drone producers, he noted.

Whereas only one drone manufacturer - DJI of Shenzen, China - exhibited at the show last year there will be a considerable rise in the number of drone makers from various countries this time around, according to the IFA executive.

And it is driving IFA technicians “crazy” due to safety concerns, he added.

Jurgen Boyny, global director of consumer electronics at GfK Retail and Technology, forecast during the press conference Saturday that “drones will be the next upcoming hype” as people’s attention to smartphones migrates to action cams and drones as they become more inclined to share video content on social networks like Facebook.

Drone hype was already hot at the CES in January as the fair set aside space solely devoted to drones, but no Korean producer was to be seen at the time.

About Samsung’s decision to take up a wholly occupied independent exhibition space of more than 6,000 square meters (64,600 square feet) on the second floor of City Cube on a long-term contract starting last September, Heithecker said he was very proud that Samsung’s “risky move” has turned out to be a big success.

Samsung has been the biggest exhibitor at IFA for the past several years and the shift to City Cube was to “realize a future vision of the home” that integrates all of Samsung’s business sectors. It showcases how people, products and services can and will increasingly work together. To demonstrate this, the company designed a space integrating all of Samsung’s business sectors, with a special focus on the future of living.

Yoon Boo-keun, Samsung’s CEO and president of consumer electronics, was the keynote speaker at IFA last year, and his counterpart at LG is in discussions to deliver a keynote speech this time, according to an insider with the IFA who wished to remain anonymous. It naturally leads to speculation that LG President Cho Sung-jin, who is often compared with Yoon in Korean media, will grab that role, but an LG spokesman said “probably not.”

Samsung and LG are domestic rivals in smartphones and large household appliances.

Samsung has also kept it a tradition to showcase its Galaxy Note phablet series at the IFA and Heithecker said the Galaxy Note 5, the follow-up to the Note 4 unveiled last September, is highly likely to debut this year at the Berlin show.

Samsung has hinted the upcoming Note 5 will feature an ultra high-definition Super AMOLED panel, which is set to become the most advanced resolution for a smartphone screen yet.