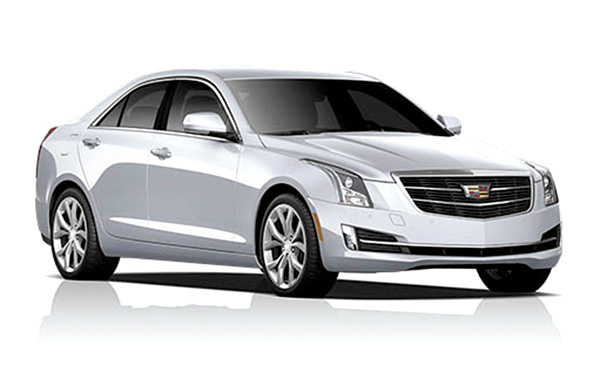 For years, the compact sports sedan market in Korea has been led by the BMW 3 Series and Mercedes-Benz C-Class, with their stylish designs and exhilarating performance. But a new challenger with a venerable marque - the 2015 Cadillac ATS - was introduced to the Korean market in February.

Since the Korea-U.S. free trade agreement took effect three years ago, American cars have not been a factor in the local market, where consumers generally consider them too big and not fuel efficient enough, a combination known as “American muscle.” However, when GM Korea introduced the Cadillac ATS in January 2013, the company said the model offered the best displacement, fuel efficiency and power train among compact and midsize sedans. The Korea JoongAng Daily took the wheel of the 2015 ATS last week for a 126-kilometer (78-mile) roundtrip from Jamsil, southeastern Seoul, to Chuncheon, Gangwon.

The ATS is 1.425 meters (56 inches) high with a sports-car interior and distinctively Cadillac exterior that adheres to the automaker’s “art and science” design philosophy emphasizing lineal beauty.

The four-button infotainment system with navigation and audio, called Cue, is simple and easy to use. Koreans generally dislike the navigation in imported cars, but the ATS’s system was much better than the one in the C-Class, which has unappealing graphics that look as if they were designed a decade ago and is controlled by a PC-like mouse.

Stepping on the gas pedal on the Olympic Expressway, the car was a bit slow to respond. Drivers who favor the comparatively quick response of Japanese vehicles that sometimes make the cars seem as light as feathers won’t like this feature.

But this is a sport sedan developed to making driving fun, which is readily apparent after leaving the city crowds for the Seoul-Chuncheon Highway and its landscape of dazzling cherry blossoms and trees on the cusp of turning bright green.

Want more fun? Switch to sport mode and use the paddle shifter mounted on the steering wheel to control the transmission manually. No matter how much experience a driver has, it’s fun to feel the car react to gear changes.

A common complaint about compact sports sedans is that ride quality and safety deteriorate at high speeds, but the ATS’s Magnetic Ride Control adjusts the car’s damping system by detecting the condition of the road surfaces every thousandth of a second to reduce vibration.

On the winding roads of the Nami Island region in Gangwon, the car gripped the pavement well and displayed excellent cornering. But the heavy steering wheel might not be comfortable for some female or older drivers.

The ATS also includes safety options like a lane departure warning system and heads up display, and would benefit from space in the front seat area.