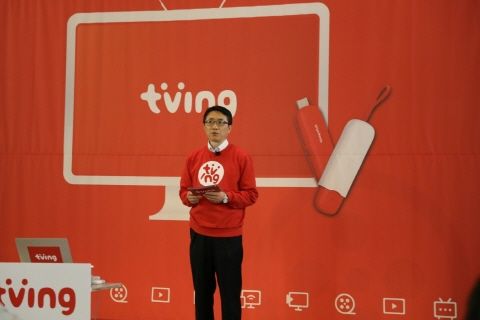 Kim Jin-seok, CEO of CJ HelloVision, speaks about the Tving Stick at company headquarters in western Seoul on Monday. Provided by the company

The company unveiled an upgraded version of its device, called the New Tving Stick, which allows users to stream content from their smartphones or computers to a TV - or vice versa - at a faster speed.

The device can be connected to the HDMI port on TVs when people want to cast the shows or movies offered by the operator.

The new device can also act as a remote control.

“What sets the New Tving Stick apart from competitors like Google Chromecast or Apple TV is that our device actually allows users to choose programming using the device itself, rather than requiring them to download an additional application,” said Kim Jin-seok, CEO of CJ HelloVision, said during a press briefing on Monday both announcing the new product and celebrating the 5th anniversary of the operator’s inception.

Tech-savvy young Koreans have flocked to the streaming service, which is cheap compared with similar offerings.

CJ HelloVision charges a la carte for TV shows and movies, which can then be streamed to users’ devices.

The CEO praised the achievement of Tving, which is gaining traction among people looking for an economic way to receive a diverse range of content.

“Tving has had a total of 7 million subscribers and more than 8 million people have downloaded the Tving application,” the CEO said.

Kim added that men in their 30s are the service’s main customers.

Thanks to the device’s popularity, other companies have jumped to provide similar services.

But CJ HelloVision said its real concern is with global content providers like Netflix and Apple TV.

“Our top priority is to develop the kind of quality content and devices that can defend our home turf from foreign rivals such as Netflix and Apple, which are eyeing the Korean market,” the CEO said.