The Korean National Ballet’s artistic director Kang Sue-jin, right, and three dancers - (from left to right) Lee Eun-won, Shin Seung-won and Kim Ji-young - on a prop horse from “The Taming of the Shrew.” By Kwon Hyuk-jae

Usually, a Korean National Ballet practice is tense, especially when there’s not even a week before the opening of a new performance. But on Friday afternoon, the practice room of the troupe in the Seoul Art’s Center in southern Seoul was filled with laughter.

That’s because the company’s artistic director Kang Sue-jin, who became the seventh artistic director of the government-run ballet company at the beginning of last year, decided to stage John Cranko’s “The Taming of the Shrew,” which is one of the few existing comic ballets among countless tragic ones. It’s based on William Shakespeare’s comedy, of course, and the legendary choreographer Cranko created a ballet piece with music by Kurt-Heinz Stolze while he was an artistic director of the Stuttgart Ballet.

“I believed this was the moment that I should introduce this work to Korea and the Korean National Ballet, which is just over 50 years old,” says Kang. “The dancers are at the right level to perform this piece while the cultural atmosphere in this country needs a kind of performance that has mass appeal.”

The Korean National Ballet is the first Asian ballet company to obtain the rights to stage the show. As Kang was a principal dancer for the Stuttgart Ballet, the Germany company probably was confident in giving the ballet company permission. 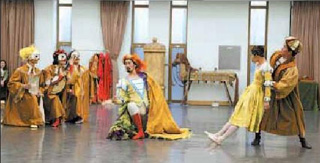 Korean National Ballet dancers rehearse for the upcoming show “The Taming of the Shrew,” which will run for five days from Wednesday at the Seoul Arts Center, southern Seoul. Provided by KNB

“I just really thank them for allowing the Korean National Ballet to perform this piece,” says Kang.

Last year, Kang was able to differentiate herself from her predecessor through the double bill of Beethoven’s “Symphony No. 7” and “The Rite of Spring.” But those are pieces that are played every year. This time, for the first piece that she could pick as the artistic director of the national ballet company, she decided to go with “The Taming of the Shrew.”

“This piece has mass appeal,” she says, adding that she feels many Koreans enjoy ballet but it is not yet a performing art that is as popular as musicals or pop concerts.

“This performance will introduce many people to ballet,” she says.

“Even though they may know nothing about ballet, they will laugh and enjoy themselves. It’s a genius piece.”

No matter how much fun the dancers seem to be having while rehearsing, giggling away and laughing at each other’s costumes, Kang says this is actually one of the most difficult works for a ballet company.

“The pas de deux for this work is more difficult than in any other work,” says Kang. “If the timing isn’t right between the two dancers, an irretrievable situation can happen.”

That is why Kang says it’s the “right time” both for Korean audiences and the Korean National Ballet to stage “The Taming of the Shrew.”

Kang has performed the role of Katherina, the lead female role, at the Stuttgart Ballet since 1997. In the performance in Seoul, Kim Ji-young, Lee Eun-won and Shin Seung-won will alternate in the role.

“I didn’t want them all to be the same,” says Kang. “They have their own individualities.”

“I wanted them to interpret the character on their own so that they can find their own color,” says Kang, adding that all three are so different that the upcoming performances will be very exciting. “My role was to help them find that color.”

It’s been nearly a year and a half since Kang took the position as artistic director of the national ballet company and her goals and style are very different from the past 12 years of predecessor Choi Tae-ji.

“If previous director Choi contributed in establishing programs and an atmosphere in which the ballet ‘visits’ the audience and made the ballet genre more friendly to Korean audiences with her excellent administrative and educational skills, new director Kang’s presence and her passion for ballet itself allows the public to be the ones marking the calendars for the upcoming performances,” says Choi Myung-suk, a lawyer in Seoul and a ballet fan who has been a private sponsor of the Korean National Ballet since 2012.

“I noticed that Kang is trying to add more contemporary repertoire as the company has been focused on classics so far,” says Choi. “Her efforts in bringing in trainers from abroad and choreographers through her network is also good to see.”