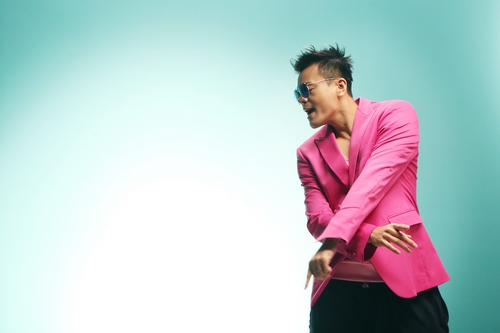 Park Jin-young finally broke out of his slump

The music video for his latest release, “Who’s Your Mama?,” hit 6 million views on YouTube as of last Friday and took the No. 1 spot in several music charts when it dropped earlier this month.

The song’s catchy beat and candid, almost cheeky lyrics in admiration of the female figure appealed to listeners.

Previously, the No. 1 spot had been maintained by Miss A, the flagship girl group of his own agency JYP Entertainment, who released “Only You” two weeks earlier.

JYP was once overshadowed by rivals SM Entertainment and YG Entertainment, but with its recent successes has been able to regain its reputation as one of the nation’s top-three agencies.

In a recent interview with Ilgan Sports, a Korea JoongAng Daily affiliate, the 43-year-old singer said the past three years have been an experimental period for his agency, trying out new systems to ensure the company’s survival in a highly competitive industry. Now that the system has stabilized, he says the efforts are beginning to show results.

Q. Were you expecting “Who’s Your Mama?” to become this popular?

A. Not at all. If I was in my 20s, I would be really happy about the result. But now, I don’t get worked up about success anymore because I know that fortune plays such a large part in it. I realized that emphasizing the process rather than the result was the road to happiness for both me and my staff.

What do you mean by that process?

There are two things: to work hard and justly. If we live up to these two conditions, I don’t care about the result. Our staff used to check the online rank of our songs every five minutes. I thought it would give them a panic disorder. So I reformed my company extensively and started focusing on these two things.

Can you explain the main concept of your latest album?

I just let my thoughts fly out and become a song. For the creation of “Who’s Your Mama?” I was just sitting one day and these provocative ideas began to rush in. I just think that I am very fortunate to do what I like and earn money from it, too.

Why did you pick Jessie as the featured rapper in “Who’s Your Mama?”

I did not want this song to be fake, so anyone who was pretending to do something would have messed up the song. One day, Suzy (a member of Miss A) recommended Jessie as the ‘real thing.’ I looked up her videos and thought she was it and contacted her personally.

As a singer, I want to perform the best songs and dances until I turn 60 years old. In terms of my company, I want to expand it to the global stage and reach a market capitalization of 1 trillion won ($931 million).

Would you prefer to take the No. 1 spot on the charts yourself or have one of your singers have that kind of success?

Of course I want my singers to do well, but I can’t give up the euphoria I feel when I am on stage. During that moment, I don’t need anything - no money, no fame, nothing.

How did you respond to Suzy and Lee Min-ho’s dating rumor?

My company only cares about two things: not being lazy and not spending money on the wrong things. Other than that I don’t care that much. How depressing it would be if a company restricts dating?

How is JYP Entertainment doing these days?

In the past three years, it has been really hard. The only way to survive was a mass production [of singers]. In order to do that, a systematic approach was necessary. But when it comes to creative work like producing artists and making music, that kind of approach was very hard to realize.

The first thing I did was to develop my company to run by itself even if I wasn’t there.

At first, everything was a mess. I reorganized work divisions and changed around the staff. My album and Miss A’s were all the result of these systems. My album received 94 points, which qualified for general release, and I was given a promotional budget that was proportional to the expectations for the album.