After 70 years, AmorePacific doing better than ever

After 70 years, AmorePacific doing better than ever

The Etude flagship store in Shanghai continues to draw large crowds. Provided by the company

This year marks the 70th anniversary of AmorePacific, the nation’s No. 1 cosmetics maker. As with Korea’s other major firms like Hyundai and Samsung, the company managed to achieve remarkable success amid the country’s turbulent transition from war-torn nation to Asia’s fourth-largest economy.

But unlike those firms, who profited from industrial activities like construction and shipbuilding, AmorePacific’s rise to the top began with a single, natural ingredient: camellia seed oil.

In 1932, the mother of AmorePacific founder Suh Sung-whan started selling the precious ointment, then used by stylish women for their hair.

She believed in “making the best products out of the best materials,” and did not hesitate to travel as far as 240 miles to get the best camellias for her oil.

Her son Suh Sung-whan took over the family business in 1945 and gave it the name “Taepyungyang,” meaning Pacific Ocean in Korean. (The company was re-named AmorePacific in 2002). Suh re-branded the company, but his mother’s focus on quality remained a cherished legacy. 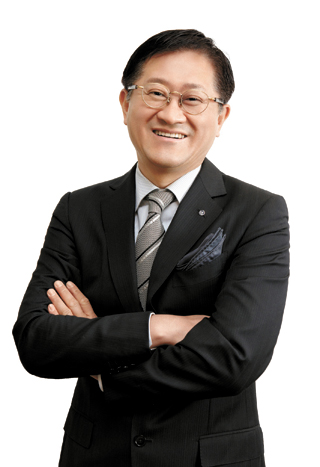 That emphasis carried over to AmorePacific’s earliest best-sellers - its Melody cream for women and ABC Pomade for men - which set themselves apart from rival products with their ingredients.

ABC Pomade, for instance, was Korea’s first plant-based cosmetic product. Made with castor oil, it was a much-improved version of then widely used mineral-based products that made hair look stiff and greasy.

The company also pioneered a scientific approach to beauty products, investing in research and development much earlier than its local peers. It opened its own lab in 1954, becoming the first Korean cosmetics company to do so.

In those early days, AmorePacific’s most aggressive sales team, or “Amore ladies” as they were called, were a group of Korean War widows who sold products door to door.

Seventy years later, the company that sold pomade and moisturizers by direct sales has become the 14th biggest cosmetics company in the world in sales.

Now a beauty-industry titan, AmorePacific Group saw 4.7 trillion won ($4.4 billion) in sales as of end of 2014, around 18 percent of which was generated outside of Korea.

“We want to help [consumers] realize their dreams and aspirations for beauty,” said Suh Kyung-bae, the chairman and CEO of AmorePacific Group.

The company’s vocational interest and approach to beauty, as well as its single-minded determination to help its consumers, has allowed the company to continue to grow, even through the financially turbulent ’90s.

AmorePacific’s top 5 brands, including Sulwhasoo, Laneige and AmorePacific, now have over 4,200 stores across the globe.

They have seen the strongest growth in the Asia Pacific region. 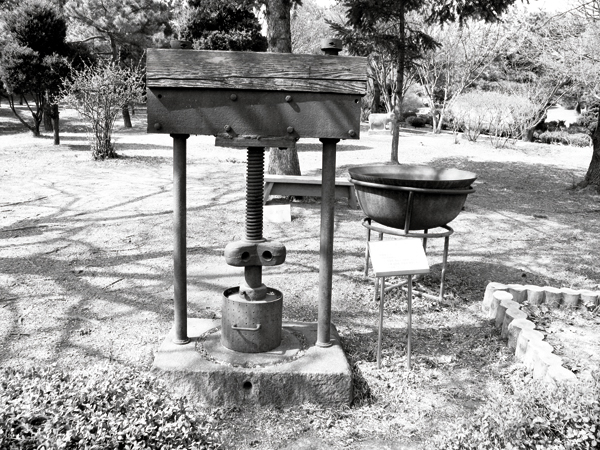 “Our consumers appreciate our interest in the uniqueness of Asian skin and use of precious medicinal herbs like ginseng in our formula,” said an AmorePacific spokeswoman.

In the United States, where its focus has been on its higher-end eponymous line of products, AmorePacific reported profits in 2014 for the first time since its entry into the market in 2003.

Fifty-three upscale department stores across the United States now carry AmorePacific brands, and Sulwhasoo was introduced at Bergdorf Goodman in New York in 2010. 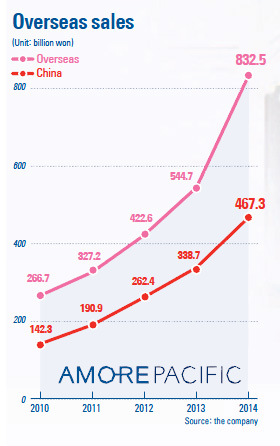 AmorePacific’s five key brands are each tailored for a specific audience.

Sulwhasoo is more upscale, popular among well-heeled female consumers in their late-20s to 50s. It utilizes prized Asian medicinal herbs like ginseng and is marketed as a “holistic skin solution” that combines modern science and traditional medicine.

There are 84 Sulwhasoo stores in nine countries, 46 of which are in mainland China, nine in Hong Kong and 10 in Thailand.

In China, the first Sulwhasoo store opened at the Beijing Department Store in 2011, and the brand has since rapidly expanded its presence in major cities across the mainland.

Sulwhasoo made its Hong Kong debut earlier in 2004 as a boutique shop at Central Building. Its nine stores in Hong Kong have posted an average 40 percent growth in sales per year since.

Since opening its first store in Chidlom, a major shopping district in Bangkok, in 2012, the Sulwhasoo brand has steadily been raising its profile in the country as an upscale global brand.

Laneige is a more mass-market brand that has driven AmorePacific’s overseas sales.

AmorePacific decided early on to make Laneige its main face in Asia, and invested over three years to set it up properly, with a special focus on China.

Its first entry into China was in Hong Kong, at an upscale department store in May 2002. It has since increased its store count to 25, with average monthly sales per store topping 100 million won.

After setting up its China office in Shanghai in September of the same year, the Lanegie brand grew rapidly in the country, riding on popularity of Korean pop culture.

As of the end of 2014, Lanegie cosmetics are available at 345 different department stores in 120 major cities in China, and Laneige is a key sales driver with hit products like the Water Sling Pack and Water Bank Line.

The Laneige brand has also joined Target’s premium skin care lineup at its U.S. stores, where the brand has been received well.

Overseas sales accounted for more than half of Laneige's sales, according to the company, with over 1,306 stores in nine countries, 370 of which are in China and Hong Kong, and 816 in the United States.

Etude and Innisfree have also been hugely successful. Etude is aimed at teenagers and young adults, while Innisfree’s plant-based products have a broader appeal.

Since Innisfree’s online launch in 2012, the brand has won over Chinese consumers in their 20s to 30s through its natural appeal. There are 108 stores across China at major shopping centers like the Super Brand Mall and Paxon Department Store.

Its green tea seed serum and black head mask are some of the top sellers.

Etude, which opened its first Hong Kong store in November 2012, was even a bigger hit when it first opened, drawing a crowd of over 2,000 on opening day.

More than 50 million won worth of Etude items were sold on this opening day alone.

Shoppers kept lining up outside the Etude shop during the first week, with hundreds waiting all night to keep their spot.

A second Etude store, within a 10 minute walk of the first, opened three months later to similar fanfare.

Mamonde, a more floral-based skin care line, has also seen strong, respectable growth in China, where there are 270 stores on the mainland that carry Mamonde products.

Analysts cite AmorePacific’s ability to produce a stream of cutting-edge new products, such as its Cushion line, as its key to success.

Since their debut in 2008, AmorePacific’s Cushion compacts - which combine coverage, SPF protection and moisturizers into a single product - have become hugely popular.

“AmorePacific has done a better job than bigger-name global brands in some areas,” said Hahm Seung-hee, an analyst at KDB Securities, referring to its hot-selling Cushion line, adding that with products like Cushion, the company “has created new global market trend.”

In 2014 alone, 26 million of its Cushion products were sold both internationally and domestically, its sales more than quadrupling in two years from 5.5 million in 2012, according to AmorePacific.

Its popularity has prompted Lancome, a subsidiary of L’oreal, to unveil a similar product called “Miracle Cushion.”

In response to the competition, AmorePacific has continued to innovate, opening new research facilities to help develop the company’s next hit product.

More than 50 billion won was invested for construction of the company’s ultra modern Mizium R&D center in Yongin, Gyeonggi, which opened in 2010. It was designed by Portuguese architect Alvaro Siva.

In 2014, the company opened Beauty Campus Shanghai, which serves as “an integrated hub of production, research and logistics,” according to the company.

“We will endeavor to emerge as an esteemed company that changes the world with beauty and health for a more beautiful future,” Chairman Suh had said.