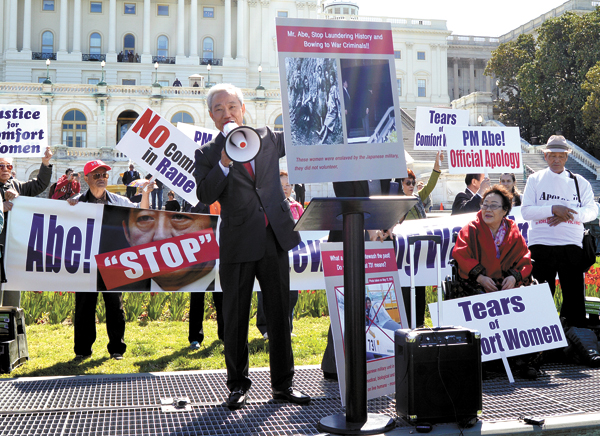 Kim Jong-hoon, a lawmaker and chairman of the ruling Saenuri Party’s international affairs committee, denounces Japanese Prime Minister Shinzo Abe for whitewashing history on Capitol Hill in Washington on Tuesday with Lee Yong-soo, one of the sex slavery victims. By Kim Young-nam

Japanese Prime Minister Shinzo Abe continued to coast through his U.S. trip without properly addressing the issue of wartime sex slaves, this time in a joint press conference with President Barack Obama.

Korea said the Japanese leader missed the opportunity to ease strained diplomatic ties with its neighbor as the two countries mark the 50th anniversary of normalization of relations.

As Abe continues to skirt the issue, Seoul officials are pondering how to tackle the history issue with Japan and whether they need to simply set lower expectations of Tokyo.

Despite a successful stop in Boston and the signing of new U.S.-Japan bilateral defense guidelines, the first question Abe was asked by a reporter at the joint press conference with Obama was on the forced recruitment of tens of thousands of women into sexual slavery during World War II by the Japanese military.

Abe repeated the same formulation he used in a speech at Harvard University and in an interview with the Washington Post ahead of his weeklong U.S. visit that kicked off Sunday.

“I am deeply pained to think about the comfort women, who experienced immeasurable pain and suffering as a result of victimization due to human trafficking,” he said Tuesday in Washington.

Again, he avoided pointing out who the perpetrators were in the trafficking, evading Japan’s legal responsibility in an issue that the United Nations and President Obama have called a “human rights violation.”

Abe ignored calls for an official apology from comfort women victims as well as U.S. scholars and lawmakers as he added vaguely that in the “20th century, women’s dignity and basic human rights had often been infringed upon during wars.”

Thus, expectations were low that Abe’s speech at a joint session of the U.S. Congress Wednesday would bring much more to the table on Japan’s historical issues with its neighbors.

Korean diplomats see a pretty consistent pattern from Abe. But his attendance at an Asian-African Conference in Indonesia earlier this month and the U.S. trip were nonetheless anticipated as a “golden time” for Abe to address history issues.

Seoul made some efforts to make April a turning point in the frozen bilateral relations. A year ago, since senior foreign affairs officials from Japan and Korea launched near-monthly dialogues to try to resolve the so-called comfort women issue.

Ju Chul-ki, senior secretary for foreign affairs, visited a group of elderly comfort women victims at the House of Sharing in Gyeonggi on April 5 to discuss what they would expect from the Japanese government.

An official at the House of Sharing said, “Secretary Ju spoke about what is happening in the dialogues with the Japanese government to resolve the comfort women issue and asked the opinions of our grandmothers.”

This was seen as a move by the White House to confirm what kind of resolution to the issue would be satisfactory to the victims, who have demanded an official apology, compensation and education in Japan on the issue.

Presidential Chief of Staff Lee Byung-kee, a former ambassador to Japan, also was involved in the process.

“The consistent hard-line attitude toward Japan practiced by the Foreign Ministry headquarters headed by Minister of Foreign Affairs Yun Byung-se led to a constant vicious cycle, and the president held a firm position that resolving the history issue came first,” said a key ruling Saenuri Party official. “Recently, Chief of Staff Lee said that Korea-Japan relations have to be eased no matter what and stepped forward to lower the president’s ‘bar,’ thus the diplomacy and security atmosphere has somewhat changed.”

A Korean Foreign Ministry official said it was a positive sign that Abe said he will “uphold” the 1993 Kono Statement acknowledging and apologizing to the comfort women victims, even though he refused to repeat the apology personally.

“There are no details on how it will be upheld, showing the limitations of that position,” he said. “But just the fact that Prime Minister Abe said with his own lips, without any conditions, that he will uphold it is quite significant. He had earlier put quite a lot of effort into denying and damaging the Kono Statement.”

In the press conference with Abe, Obama said that their visit to Arlington National Cemetery was “a powerful reminder that the past can be overcome, former adversaries can become the closest of allies, and that nations can build a future together.” But he didn’t directly address the history issue with Seoul.

In a speech at the Asan Plenum in Seoul Tuesday, Korean Minister of Foreign Affairs Yun said, “The Korea-U.S. alliance, which is known to be in its best state ever, cannot and will not be weakened or marginalized because of the U.S.-Japan alliance. We need to overcome this mentality of a zero-sum game.”