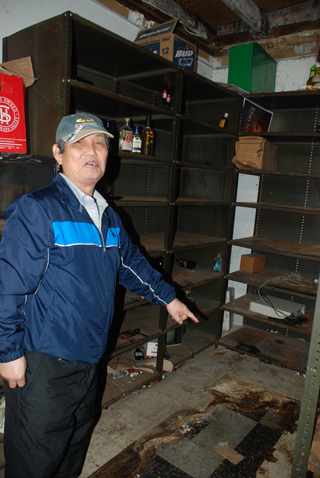 Yoon Seok-won points to empty shelves in his liquor store at the intersection of North Avenue and Pennsylvania. By Heo Tae-jun

BALTIMORE - Downtown Baltimore looked as though a hurricane had swept through Tuesday morning, with burnt out vehicles and smashed store windows. Rioting and looting Monday night sparked by the death of Freddie Gray, 25, in police custody also affected South Korean immigrants doing business in the city, which is now under a 10 p.m. curfew.

An association of Korean restaurants and grocery stores in Baltimore said Monday that 22 Korean business places have been affected. Some were torched by rioters, and more reports of damage and looting are expected in coming days.

Tuesday morning, I stopped by a liquor store owned by Park Young-min about eight kilometers south of the center of the riots Monday night. Debris was scattered outside. It was past 10 a.m. and as I was about to get out of my car, a man pushed through the front door of the empty store carrying a big bag.

Still inside my car, I called Park on the phone.

“I have been unable to go to the store because of the riots,” he said. “The district my store is in isn’t covered by the police yet. You’d better leave the area as soon as you can.”

It seemed that while the center of city was being taken back from the rioters who pelted the police with rocks, the outskirts of the city were still open territory for looters.

“That store was the bedrock of my American dream,” Park told me.

“I can’t even describe in words my feeling of loss,” he said. “It’s as if my life has ended. I have no idea how I’m going to make ends meet.”

I drove toward North Avenue, the section of the city heavily rocked by the riots Monday. Some roads were still blocked by the police. I went to another liquor store run by Yoon Seok-won for the past 20 years at the intersection of North Avenue and Pennsylvania Avenue.

It was one of the sections of the city most heavily battered by protestors. Yoon was inside the store. As I entered the store I saw empty shelves and refrigerator cases. All he had in the store was looted Monday night. He estimated he had suffered over $100,000 in losses.

“I have lived in the city for over 34 years and run this store for 20 on the same spot, and never have I seen anything like this,” said Yoon. “I don’t know what to do now.”

The store owner, however, added he was relieved that no one had been hurt from the violence, saying he had closed the shop on Monday because it was one of the two days a month that he closes the shop.

At another Korean-owned liquor store near the Mondawmin Mall, the inside was totally battered. Protestors broke into store, owned by Lee Han-yeop, by cutting a lock and smashing a bullet-proof window.

Lee said the looters smashed some surveillance cameras inside the store but he still managed to see some footage of the looting over the Internet.

Upset by the stealing, Lee said he drove to his store around 11 p.m. Monday but could not stop the violence. He watched helplessly as his store was looted. When he called the police, they said they lacked manpower to be sent to his store. When he returned at 4:30 a.m. the next day, he found his store totally empty.

“I encountered a thief twice over the past two years,” he said. “But I had never thought such outright looting could happen. My heart sinks. It was like watching a war zone.”