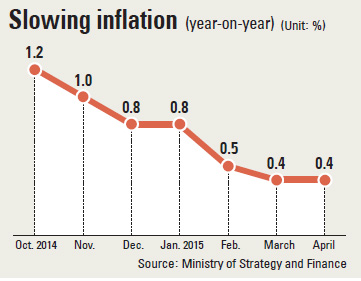 Korea’s consumer inflation rate maintained its slowest pace in a decade in April, deepening fears that the Asia’s fourth-largest economy is slipping into deflation and a protracted slump.

The country’s consumer price index rose 0.4 percent in April from a year earlier, the same rate as March and the slowest pace in 16 years, data from the Ministry of Strategy and Finance showed on Friday. The index stayed between zero and 1 percent for five consecutive months.

Given that cigarette prices, which the government increased by double in January, raised overall consumer prices by 0.58 percent, April’s inflation has been seen as effectively below zero.

The inflation rate has been sluggish since November 2013, when it first dropped below 2 percent, and stayed between 1 and 2 percent over the next 12 months. In December 2014, it first dipped below 1 percent and gradually fell toward zero as of April.

Authorities said that plunges in global oil prices by 20.9 percent and the latest decrease in city gas bills, which refer to the prices of retail gas provided to households, by 10.1 percent, dragged down overall consumer prices by 1.4 percentage points.

“The decrease in oil, petrochemical products and city gas bills was the biggest factor, and the factors continue to affect [overall prices],” Kim Bo-gyeong, an official from Statistics Korea, said at a briefing on Friday. “Meanwhile, housing bills and other service charges are constantly climbing.”

Both Korea’s exports and imports dropped again for April as global and domestic economies remain sluggish.

The trade surplus, in particular, reached a record high - a sign that the domestic economy is getting worse - with imports shrinking at a faster pace than exports.

According to the Ministry of Trade, Industry and Energy on Friday, exports in April recorded $46.2 billion, an 8.1 percent drop year-on-year, while imports plunged by 17.8 percent year-on-year to $37.7 billion.

The trade surplus reached a record level at $8.48 billion, making April the 39th straight month in which there was a surplus. This time, Korea broke its record for trade surpluses for three consecutive months.

The Trade Ministry said the largest factor was that local companies were squeezing their belts when it came to purchasing raw materials, even while unit prices for major raw materials like crude oil have recently gotten cheaper.

According to the Trade Ministry, Korea’s strongest export items - including automobiles, mobile phones, oil and petrochemical products - all declined at the fastest pace during April.

Analysts implied that a continuously rising trade surplus may be a sign that the Korean economy may be accelerating into a period of long-standing low-growth.

“Shrinking consumption, mainly caused by heavy household debt, may result in an increasing trade surplus [due to export performance, which are relatively larger than imports] and the weakening won,” Kang Doo-yong, senior researcher of trade and industry at the Korea Institute for Industrial Economics & Trade, said in a report last month. “These factors raise the possibility of deflation, and these signs may get stronger as Korean exports potentially slow.”

Another sign of a sluggish domestic economy has appeared in the increase in unemployment pay.

Unemployment pay, which the government hands out, surpassed 400 billion won ($371 million) for two straight months this year as unemployment rose.

According to the Ministry of Employment and Labor on Friday, the Korean government gave out unemployment pay worth 403.8 billion won in April to some 413,000 people, up 14.7 percent year-on-year.

According to data compiled by the Korea Employment Information Service, 19.1 million people in their 20s received unemployment pay in March, higher than 18.5 million in March 2014 and 18.2 million in the same month in 2013.

Numbers of older recipients in their 40s, 50s and 60s rose at the fastest pace, as the government since last year started providing unemployment pay for people hired before they turned 65.

However, even excluding those recipients, the rising number of people in their 40s and 50s means that the numbers of involuntary dismissals have also risen.

The Employment Ministry explained that this is not necessarily a sign of a worsening domestic economy, because the amount of unemployment pay is determined annually depending on the minimum wage, which rises each year.

“Right after the global financial crisis, unemployment pay reached a record high, because there were way more applicants due to mass layoffs despite the payment cap being way lower than now,” said Kim Gyu-seong, an Employment Ministry official. “This year, overall unemployment pay that each recipient got increased compared to after the global financial crisis.”

Employment Minister Lee Ki-kweon recently implied a possibility that the ministry may extend the maximum period of unemployment benefits, from three months to four months.

But despite Finance Minister Choi Kyung-hwan’s ambitious stimulus policies, the latest data showed sluggish consumption and production in the country.

In March, consumption dropped 0.6 percent from a month earlier, while investment on new facilities fell 3.9 percent. Production in overall industries also plummeted 0.6 percent month-on-month, including 0.4 percent in mining and manufacturing.

Particularly, the average operation rate in the manufacturing industry posted 73.6 percent, the lowest-ever record since May 2009.

In the midst of a sluggish domestic economy, the strengthened won against other foreign currencies is worsening the conditions for an export-driven Korean economy.

On Tuesday, the Japanese yen’s value against the Korean won slipped below the 900 won mark for the first time in seven years and two months.

Although it managed to rebound above the 900-won level, closing at 904.44 won on Thursday, concerns are mounting that a weak yen would erode price competition for Korean exporters against their Japanese rivals, particularly in the automobile, machinery and IT sectors.

“The Committee today reaffirmed its view that the current 0 to 1/4 percent target range for the federal funds rate remains appropriate,” the committee said in a statement. “Economic growth slowed during the winter months, in part reflecting transitory factors.”

Speculation has surfaced that the Korean government could downgrade its economic growth outlook for 2015 in its next announcement in June from 3.8 percent in its previous forecast, which was announced in December.

Finance Minister Choi said Monday in a meeting with ministry officials that he believed the economy was on the brink of rebounding, though some analysts have said the Korean government’s targeted outlook is too rosy, given the latest gloomy data on the economy.

The Bank of Korea cut economic anticipation to 3.1 percent in April, from its former outlook of 3.4 percent. The International Monetary Fund also trimmed its forecast, to 3.4 percent from 3.7 percent.

Slow economic growth has also led to concerns that the Finance Ministry will face a shortage in tax revenue.

“Deflation is already under way and deepening in Korea,” said Sung Tae-yoon, an economics professor at Yonsei University. “A slump in consumption, production and investment leads to a decrease in exports and imports, worsening the real economy in the midst of a weak yen and U.S. dollar against Korean won.

“The government should abandon its rosy outlooks and outline some preemptive policies, like additionally lowering interest rates.”