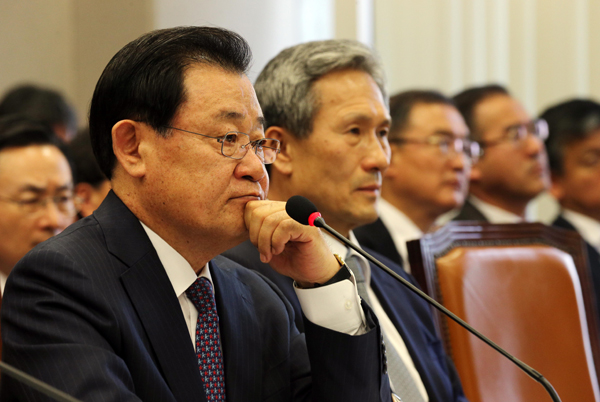 The presidential chief of staff has denied allegations that he received money from the late businessman Sung Wan-jong, a former construction tycoon who claimed before his death that he had given illegal funds to members of Park Geun-hye’s inner circle for years.

The accusations against Presidential Chief of Staff Lee Byung-kee come as prosecutors expand their investigation into a 56-word memo found on Sung’s body following his apparent suicide.

The late businessman was discovered April 9, hanged from a tree branch on Mount Bukhan in Seoul. In his pocket, investigators came across a list with the names of eight politicians whom Sung had allegedly bribed.

In an interview with a local newspaper just hours before his body was found, Sung disclosed details of his money dealings and claimed he had become a political scapegoat.

On Friday, Lee - one of the people implicated on the memo - appeared before the House Steering Committee, commenting on the issue for the first time since the investigation opened.

“We’ve known each for a long time, so Sung often asked for my advice,” he said. “We’ve never given money to each other.”

When asked about the more than 140 phone calls made between them over the past year, Lee responded: “Ninety percent of the calls were probably made by the Sung.”

South Gyeongsang Gov. Hong Joon-pyo, who has continued to deny similar allegations waged against him, also stated Friday that Sung’s note and the interview could not be used as evidence.

“It looks like [Sung] made them in anger before killing himself,” he said. “If you take a look at the transcript of the interview, there is false information, exaggerations and emotional statements.”

On Friday, prosecutors said that they had acquired records of the schedules of former Prime Minister Lee Wan-koo and Hong and are comparing them to Sung’s calendar.

Sung previously claimed in an interview with a local media outlet that he gave 100 million ($93,100) won to Hong in June 2011, and 30 million won to Lee in April 2013. Investigators are currently focusing on the appointments made by the three men during those periods.

Hong and Lee will likely be the first to be summoned among the eight politicians listed in Sung’s note due to circumstantial evidence acquired by the prosecution.

The prosecution on Friday also extended the detention periods for Sung’s key aides - Park Jun-ho, a former executive at Keangnam Enterprises, and chief secretary Lee Yong-gi. They are currently detained over suspicions that they destroyed evidence.

Although most of the suspects on the list are considered part of President Park’s inner circle - Sung claimed that he provided money to fund Park’s 2007 primary run and her 2012 presidential campaign - her approval ratings have gone up by 4 percentage points over the past week.

According to Gallup Korea’s poll conducted Tuesday to Thursday, Park’s approval rating stood at 39 percent, up from 35 percent last week.

The polling company said the president’s marks increased after she made her statement on the scandal, while at the same time attacking the main opposition party over two special pardons Sung was granted while he was serving as a lawmaker during Roh Moo-hyun’s presidency.

Moon Jae-in, the opposition chairman, was Roh’s closest ally during his 2003-2008 presidential term.