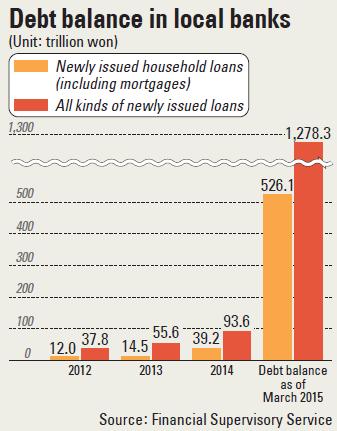 The amount of household loans issued by local banks rose 4 trillion won ($3.7 million) in March from a month earlier, the biggest monthly growth in nine years, the Financial Supervisory Service (FSS) said in a report on Monday.

The FSS report said the total debt balance in local banks stood at 1,278.3 trillion won as of the end of March, rising 4.6 trillion won from February.

The increase has been mainly driven by surging household debt, the FSS report showed. Compared with the data from February, the balance of household loans issued by banks stood at 526.1 trillion won, rising 4 trillion won.

The FSS report came after other recent government data showed that household debt had risen with the eased real estate regulations, which were part of Finance Minister Choi Kyung-hwan’s stimulus measures to boost the sluggish domestic economy.

Although the debt balance is increasing, its default rate is not that risky, the FSS said.

But economists and analysts warned that the growing household debt was still a potential danger to the Korean economy.

In February, a report by Mckinsey Global Institute picked Korea as one of the seven economies with “potential vulnerabilities in household debt,” along with the Netherlands, Canada, Sweden, Australia, Malaysia and Thailand.

The report, titled of “Debt and (not much) deleveraging,” says the seven economies need “effective tools” for “issuing, monitoring and managing household debt,” as it could spark a “crisis” in their economies.

Bank of Korea chief Lee Ju-yeol said, however, that the rising pace of household debt was “faster than expected” and that the current level “is quite high.”