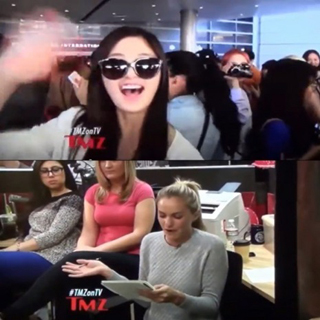 Hyerin and Junghwa, right, of girl group EXID are the center of attention after reporters at U.S. entertainment TV show TMZ were criticized for making fun of their accents.

During the program “TMZ on TV,” in which reporters gather to talk about entertainment news, shown on Friday local time, a video of the two singers arriving at Los Angeles International Airport to take part in the “13th Korea Times Music Festival” was shown.

In the video Jungwha says, “I’m so happy,” which is immediately repeated in a mocking tone by one of the reporters on the TV show.

Although another member of the show repeatedly shakes his head and says “No” to her while others gasp and laugh, the reporter defends herself by saying she would have made fun of the singer if she had a British accent, too.

An Asian-American reporter then says “Thank you” in a way that seems to mimic Hyerin, another EXID member who speaks in the video.

Since the release of the video on YouTube, many U.S. Internet users are claiming that the video is full of prejudice and that TMZ should apologize to EXID.

Many Koreans, as well as K-pop fans around the world, are also criticizing TMZ.

Taiwanese-American singer Amber of girl group f(x) posted a comment on her Twitter on Sunday saying, “I was gunna stay quiet but I cant. Seriously, @tmz not cool man. All Americans face palm at your rude and childish action.”