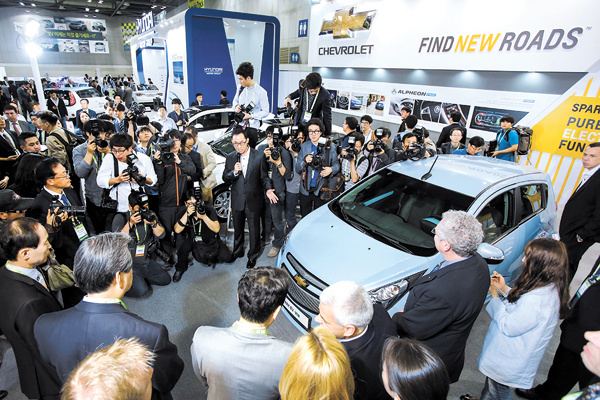 GM Korea presents its electric Chevrolet Spark vehicle during the 28th International Electric Vehicle Symposium and Exhibition at Kintex in Goyang, northern Gyeonggi, on Monday. Provided by the company

GOYANG, Gyeonggi - The 28th International Electric Vehicle Symposium and Exhibition, the world’s largest event showcasing trends in the electric vehicle (EV) industry, began Monday at Kintex in Goyang, northern Gyeonggi. About 1,000 people from 140 businesses in 45 nations, as well as experts and university professors, attended the event to discuss recent developments in the EV industry through Wednesday.

GM Korea, the nation’s third-largest automaker, drew the most attention among local automakers. It announced that the company will start selling the second generation of the Volt, first unveiled at the North America International Auto Show in January, next year in Korea. The new Volt is built with the company’s Ranger Extender system, which allows the vehicle to drive 80 kilometers (50 miles) solely on its electric battery - about 30 to 50 kilometers longer than the driving distance offered by plug-in hybrid vehicles. Using both the battery and gas, the second-generation model offers a maximum travel distance of 676 kilometers, according to the company. Using its two electric motors, the car can reach 97 kilometers per hour in 8.4 seconds, which is a 19 percent improvement from its predecessor.

“The shift of the global population to cities is creating both opportunities for innovation in electrified transportation and challenges in infrastructure to support plug-in vehicles,” GM Executive Director of Global Transmission and Electrification Larry T. Nitz said in his keynote speech.

During the event, GM Korea will give eight presentations and will display the company’s first EV, the Chevrolet Spark, along with the Volt and Alpheon eAssist. It will also provide an opportunity for visitors to test drive the Spark.

Normand also announced that the company will bring the two-seater EV Twizy to the country. “The Renault-Nissan Alliance has invested about 4 billion euros [$4.5 billion] and sold 250,000 EVs until last year, which was about 50 percent of the world’s EV market, and currently has the biggest EV lineup,” said Normand. “Among the lineup, we will bring in Twizy to Korea for test runs in the first half.”

The Twizy is only a third the size of a normal sedan and is being manufactured in Spain. It has sold more than 15,000 units in Europe since its introduction in 2012. Despite its compactness, the car offers 55 liters (1.9 cubic feet) of trunk space, which has made it popular among small retailers that make deliveries and consumers looking for a second car.

“The car industry is currently being reorganized with EVs as the center, as it is being supplied to consumers 25 times faster than hybrid cars,” said Normand.

“Korea is one of the leading nations in Asia in the EV industry and we aim to popularize EVs by introducing the Twizy.”