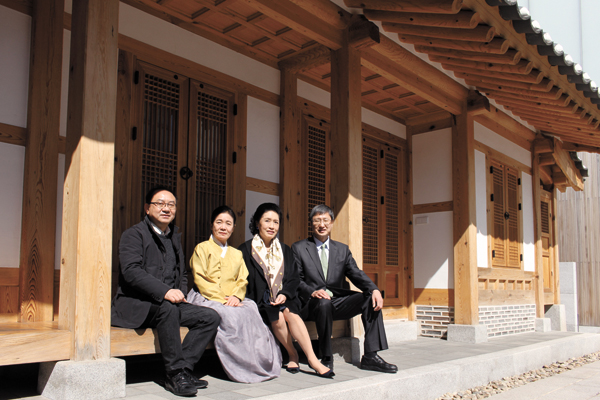 “When I was at Juilliard, my teacher was a very renowned cellist. As he was busy traveling all over the world to perform he could only give me lessons maybe once a month. But I remember when he came to teach me he played on his cello to demonstrate, and hearing just one stroke from him moved my heart and soul,” said Chung Myung-hwa, 71, a cellist dubbed the doyenne of the instrument in Korea.

“We are people who express ourselves through sound,” she added. “The young students who are learning music will understand us through the sound we make. Although we can’t meet them every week and it will be just once in a while, I know it will make a difference in their lives, because it changed my life. It was just a couple of strokes from my teacher, but it was an astonishing sound, and that sound turned my world around.”

Hyundai Motor’s Chung Mong-koo Foundation has launched a new corporate social responsibility project with a team of Korea National University of Arts (K-Arts) professors. For “The Art World Village Project,” the company chose the rural Gyechon Village in Pyeongchang County, Gangwon, and Bijeon Village in Namwon City, North Jeolla, in order to share music and its value in areas without many cultural activities. The project will start off with two music genres - classic and pansori (traditional narrative singing) - and will go to each village to mingle with the residents and educate students. Masters of these two genres, cellist Chung and pansori singer Ahn Sook-sun, who is dubbed as a “living cultural asset,” are helping.

The team of professors at K-Arts have traveled throughout the country for research purposes since last year and decided to turn this small community into a “village of classical music.” Bijeon, on the other hand, will become a “village of gugak,” the professors say. 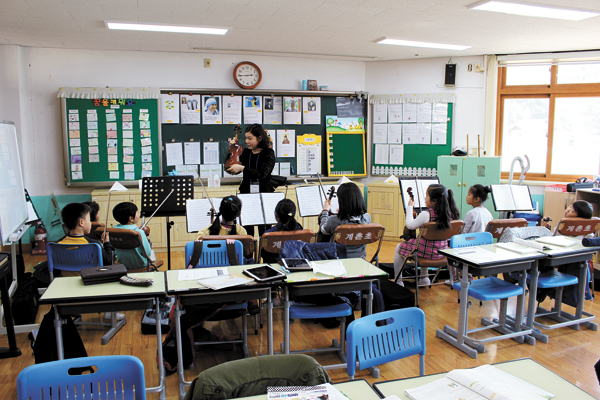 Teachers from KNUA began teaching students at Gyechon Village from March. Provided by the foundation

The project will last for three years initially.

“If we believe this works well, we want to expand to genres like animation, webtoons and even architecture, as well as the region,” said Lee Dong-yeon, a K-Arts professor and the artistic director of the project. He also stressed that it will not be on a short-term basis.

“After three years we’ll carry out an evaluation,” said Kang Dong-shik, secretary general of the foundation.

“If this turns out to be helpful for the people, we want to make this our foundation’s representative project and make it a long-term project.”

Gyechon Village was not selected just because it is somewhat isolated, even in the rural Pyeongchang area. The village’s Gyechon Elementary School established “Gyechon Starlight Orchestra” in 2009, comprised of all its 37 students. The orchestra’s goal is to train for three years through the project with cellist Chung and the teachers of K-Arts and obtain an opportunity to perform at the opening ceremony of the Pyeongchang Winter Olympics in 2018.

Bijeon Village was chosen for its history as it is the birthplace of Song Heung-rok, known as the “King of pansori” in Korea.

Namwon has always been the center of gugak and is also used as the background of two of the nation’s five epic pansori.

“But it’s a fact that not many Koreans enjoy this music genre that is ours. I am so pleased to take this opportunity to share gugak with the people and the joy behind it.”

After a few months of training in each village, collaboration performances from the locale will be held. These will begin with the two masters, with music especially written for Ahn and Chung by a composer at K-Arts.

“When I was an artistic director for the National Changgeuk Company, I did a number of collaborations with classical orchestras,” said Ahn.

“After one concert, I heard the orchestra members saying that it was their first time listening to pansori. I was very shocked because they were not just ordinary people, they were musicians. Although it was a different genre, I was surprised that they never went to a pansori performance in their life. Since then, I decided to do as many collaboration performances as I can. I am very much looking forward to this one with cellist Chung as well.”

Master classes will be held in each village and festivals will also be put on in July in Gyechon and August in Bijeon throughout this year.