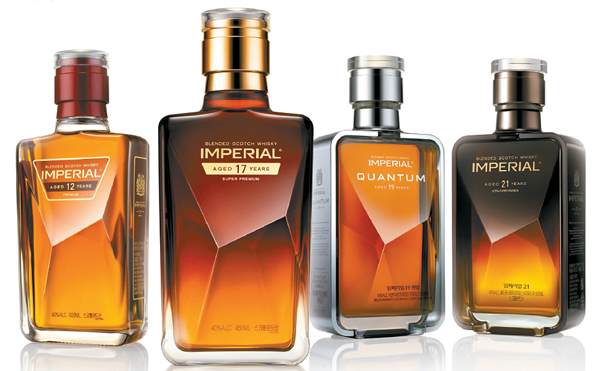 Imperial whiskey Provided by the company

Pernod Ricard’s Imperial whisky has been picked as a top brand by the Korea Customer Surprise Brand Index, the company said.

The Korea Customer Surprise Brand Index, or K-CSBI, is released by the Korea Brand Management Association, an agency overseen by Korea’s Ministry of Trade, Industry & Energy.

Brands are picked every year based on the survey of over 1,000 consumers and reviews by a committee of judges consisting of industry experts.

Imperial, which was first introduced in Korea in 1994, comes in four types designated by the number of years the respective whiskies were aged: Imperial 12, 17, 19 Quantum and 21.

One of the best selling premium whiskies in Korea, Imperial is known its authentic yet smooth flavors.

The brand has developed innovative ways to ensure authenticity of the brand, with new anti-counterfeit system on its caps that allows buyers to know immediately whether a bottle has already been opened or not.

The Imperial brand also underwent a dramatic rebranding in 2013 and subsequently received a Red Dot Design Award in 2014 for communication design. The award is among the most prestigious in the fields of advertising and corporate media.

“Imperial has been loved by Korean consumers for past 21 years. We have maintained our quality as premium whisky, and also managed to offer smooth flavors,” said Yoo Ho-sung, an executive at Pernod Ricard Korea.

“I think that is why we continue to be the preferred whisky brand by our consumers. We are grateful for this recognition by the group of esteemed consumers and experts, and we will strive to maintain our excellence,” he added.

Imperial whisky has won a number of awards this year, including 2015 Korea Spirits Award and 2015 Korea’s Most Trusted Brand Award.