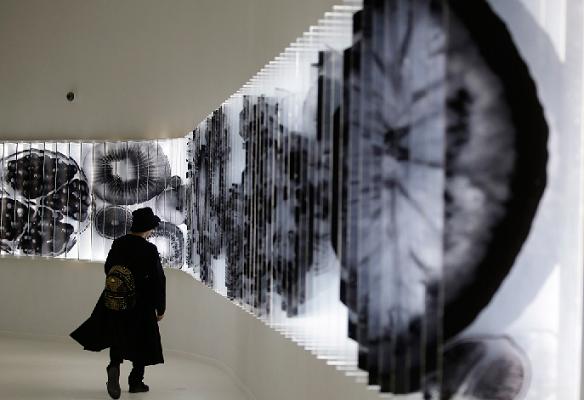 A visitor walks inside the Republic of Korea pavilion at the Expo 2015 in Rho, near Milan, on Monday. The Expo opened Friday for a six-month run and its theme is “Feeding the Planet, Energy for Life.” [AP/NEWSIS]

The fair, which opened May 1 for a six-month run, delights with a mishmash of global architecture and culinary specialties as organizers seek to advance a universal conversation on how to guarantee food for all while protecting the environment.

One of the fair’s chief appeals is the tight urban interplay of representational architectural styles that surprise more than command: Nepalese stupa, Kuwaiti sails, Tajik tiles, Thai bamboo pillars, a Moroccan mud-brick structure, the United Kingdom’s enchanting fairy-lit honeycomb and vertical gardens cultivated on the walls of the U.S. and Israeli pavilions.

“I did not know what to expect from an expo,’’ said German visitor Gabriele Kumlin, who spent 12 hours roaming the grounds on Monday. “I was really surprised how beautiful these pavilions were. I loved the whole setting.’’

The expo has an ambitious agenda beyond being a global street fair, with the Italian government backing a process to create a document aimed at creating food security, fighting waste, combating hunger and guaranteeing good nutrition. Visitors, businesses and civil society are invited to sign the so-called Milan Charter, which is to be presented to UN Secretary General Ban-Ki Moon when the fair ends.

Some pavilions are more on message than others, taking to heart expo’s mission to contemplate the planet’s dwindling natural resources and stimulate action. Others are more pointed at promoting tourism to off-the-beaten path destinations.

There’s an interesting mix of hands-on experience and technology to involve visitors in the discussion - with the analog experience winning out in many cases, perhaps due to the nature of the topic of food and agriculture.

Water is the focus of many desert nations. Kuwait greets visitors to its pavilion with a curtain of water that spells out “Water is the element for survival’’ in English, then Italian then Arabic.

The technologically advanced Japan pavilion has an app that allows visitors to collect pictures, including an engaging scene of dancing animals in a virtual rice paddy, and finishes in a restaurant-style theater where visitors use chopsticks to interact.

The layout of the expo reflects the geometric simplicity of the site’s Roman-era street plan: a 1.5-kilometer (mile-long) main drag providing a view of all of the 53 national pavilions called Decumano. It’s intersected by a 350-meter (nearly quarter-mile) Cardo cross-road that provides an axis between the host Italian pavilion and the Tree of Life sculpture, and the Expo’s open-air theater.

Amid it all are culinary specialties from street food to gourmet cuisine, from virtually every corner of the globe - not an exaggeration if you consider Expo’s boast that the more than 140 participating countries comprise more than 90 percent of the world’s population.

With so much to take in, the Austrian pavilion offers the best advice to Expo visitors: Breathe. The word comes into view, formed by stationary letters that align as visitors walk up the path into Austria’s restorative, transplanted forest. AP