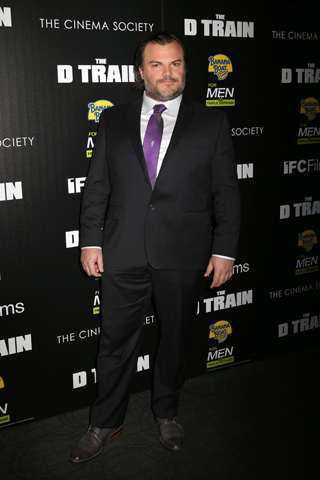 Jack Black attends the premiere for “The D Train,” hosted by The Cinema Society at the Landmark Sunshine Cinema on Wednesday, May 6, in New York. [AP/NEWSIS]

NEW YORK - At an East Village restaurant over dinner recently, after ordering mussels and selecting a white wine, Jack Black proffered a theatrical “Gratzi’’ to the waitress. He then leaned in expectantly, his gymnastic eyebrows raised, eagerly awaiting a response that didn’t come.

“She didn’t say ‘Prego,’?” he said, slumping back into the booth, crestfallen.

Black was in town to promote his latest film, “The D Train,’’ a black comedy about a status-obsessed family man organizing his high school reunion. Black had just come from taping the “Tonight Show,’’ where he and Jimmy Fallon remade the music video to the Extreme ballad “More Than Words.’’

Sitting down to eat, he bellows: “If you want the scoop, you got to feed the beast!’’

Four years ago, Black starred in Richard Linklater’s “Bernie,’’ a comedy about a true-life tale of a beloved small-town Texas mortician convicted of murder. The movie was smaller than Black’s normal output (“Kung Fu Panda,’’ “Gulliver’s Travels,’’ “Year One’’) but it was acclaimed. Black, it turned out, is an exceptional character actor.

“I was like: I want to make more of these movies that are weird and cool,’’ he says. “No money because that’s what happens when you make a weird movie. I was actively looking for more indie projects because of my experience on ‘Bernie.’’’

But Black’s options in the business were also shifting.

“Let’s be honest, I’ve whiffed it a couple times,’’ he says. “And then it’s nervous times. And like three years goes by, then here comes another wave. I’m glad I’m catching another wave.’’

In addition to “The D Train,’’ out Friday, Black stars in the upcoming satirical HBO series “The Brink,’’ as well as two animated films: this fall’s “Goosebumps’’ and next year’s “Kung Fu Panda 3.’’ He’s increasingly looking to build projects (like “The D Train’’) through his production company.

“The industry has changed and my place in it has changed,’’ says Black. “If I want to work on cool things, I’ve got to generate it. If I’m just going to sit around waiting for Paul Thomas Anderson or Quentin Tarantino to call me, the career is already over.’’

A conversation with Black could have its own mixtape. The Beatles’ “Sexy Sadie,’’ Kanye West’s “Yeezus’’ and Die Antwoord are discussed; songs sung include the Rolling Stones’ “Torn and Frayed,’’ Neil Young’s “Comes a Time’’ and Cat Stevens’ “Where Will the Children Play,’’ which Black recently performed at a benefit. “Han Solo was there,’’ he says, referring to Harrison Ford. “He came over. Single tear.’’

Black’s wife is a cellist: “We do jam,’’ he says. At their Los Angeles home with their two boys, Black prefers to stay out of the limelight. “I like to go swimming and just put on a record, listen to half, go in all wet, getting the floors all wet, flip it and play the other side of that record.’’

“I don’t have any famous pals, for instance,’’ says Black, though he grants recently attending an Easter egg hunt at Brad Pitt and Angelina Jolie’s house. “I like working with the people I’ve worked with - I’m very fortunate - but I don’t keep in touch with them. I kind of live in a weird bubble.’’

In “The D Train,’’ Black plays perhaps his least likable character. “A total turd,’’ he calls him. To lure the most popular guy [James Marsden] back to the reunion, he piles fiction on top of fiction until it leads to an already infamous bisexual encounter. “The D Train’’ could be the bromance to end all bromances.

“School of Rock’’ remains the quintessential Black film. He’s bombastic and sweet, a combustible, always-riffing tornado of enthusiasm. But “The D Train’’ and “Bernie’’ point toward a new direction.

Chatting with the waitress, Black discovers she’s Estonian. “I’m glad I cleared that up,’’ he says, “because that could have gone on all night.’’ But later as he sips his after-dinner drink, he tries once more.