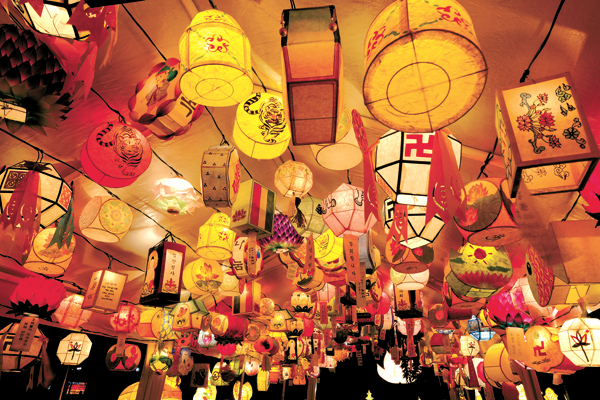 Lanterns of various shapes and sizes were on display at Ujeong park in Jongno District, central Seoul, during last year’s Lotus Lantern Festival, one of the country’s biggest.

You may have noticed the colorful lanterns dotting the streets of Seoul.

It’s that time of the year, when Koreans celebrate Buddha’s coming into the world with lanterns.

As usual, a lighting ceremony signaled the start of the festivities. On April 29, a 20-meter-high (65 feet) massive lantern in the shape of Korea’s Mireuksaji stone pagoda was erected and lit, marking the beginning of the three-day festival known for its color and scale.

The pagoda, National Treasure No. 11, is the oldest and the highest stone pagoda in Korea at 14.24 meters high.

It is also a symbol of the Mireuksa Temple site, the biggest Buddhist temple from Korea’s ancient Baekje Kingdom (18 B.C. to A.D. 660).

According to historical records, Mireuksaji is believed to have had nine tiers that were altogether as tall as 27.67 meters. It now only has six tiers, however, due to damage incurred in the past.

Back to color and festivities

The Lotus Lantern Festival, or Yeondeunghoe, will run from May 15 to May 17 and includes a lantern parade and traditional cultural events to celebrate the birth of Buddha, which falls this year on May 25.

The festival itself is designated Important Intangible Cultural Heritage No. 122. It originated in the Silla era (57 B.C. to A.D. 935) and has persisted into the modern day.

To celebrate, temples nationwide light lanterns to symbolically transmit the wisdom and compassion of Buddha. During this year’s Lotus Lantern Festival, more than 100,000 lotus lanterns will light up Seoul, as in previous years.

The Lotus Lantern Festival is typically known for its colorful lighting and fancy decoration. Last year’s event, however, saw many of its scheduled activities canceled in the aftermath of the Sewol ferry tragedy, which took the lives of more than 300 passengers and crew.

“In last year’s festival, we mostly used white and yellow lights rather than the usual fancy, colorful lights in order to express our condolences to the victims,” said Hong Min-seok, a publicist for Yeondeunghoe Preservation Committee.

According to Hong, the festival’s color and celebratory mood is slated to return this time, under the theme “Peaceful Mind, Harmonious World.”

Yeondeunghoe will be especially meaningful this year, as 2015 marks the 70th anniversary of Korea’s liberation from Japanese colonial rule (1910-1945). The festival will convey the deep longing to achieve peace on the Korean peninsula and throughout the world. 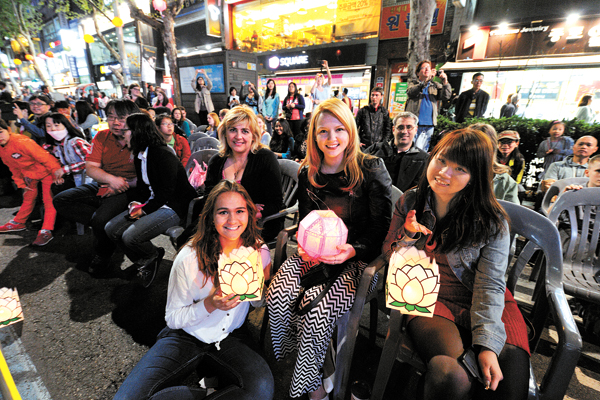 Festival-goers hold up the flower-shaped lanterns that were distributed last year to attendees at the event. Provided by the committee

Lanterns depicting the Korean peninsula and its flag will be used to honor the anniversary. Twenty religious leaders from around the world have also been invited to the country.

Unlike most festivals that have commercial purposes, the Lotus Lantern Festival seeks to achieve a sense of sharing among others.

The lanterns lit during the festival will be freely given out to participants. Festival-goers can also learn the method of making artificial flowers for free.

During the Lotus Lantern Festival, citizens can enjoy performances like Eoulim Madang, in which participants wear traditional Korean dress and rally together on the second day of the festival, and the Lantern Parade, during which 100,000 lotus lanterns brighten up the route from Dongdaemun to Gwanghwamun Plaza in central Seoul.

“Although the number of lanterns was not as many as it usually is due to the Sewol ferry accident during last year’s festival, I still found them really pretty as I walked along Cheonggyecheon Stream,” said 22-year-old Sogang University student Han Ji-eun, who took part in the festival last year. 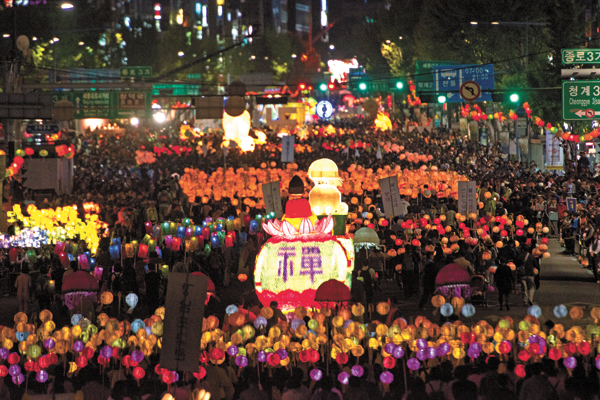 This year, 100,000 lanterns will be lit during the festival. This picture was taken at last year’s Lotus Lantern Festival. [JoongAng Ilbo]

“After attending the lantern-lighting festival, I thought it would be a great idea if it was used to attract more tourists to Korea. I think meeting new foreign friends through the festival would be really fun.”

In fact, the Lotus Lantern Festival provides special services specifically tailored for foreigners, making the event accessible to everyone regardless of religion or nationality.

“There are special seats saved for foreigners at Topgol Park in Jongno District so that they can enjoy the performances in comfortable seats,” Hong said. “But the seat needs to be reserved beforehand and to do so, foreigners have to make a reservation in advance and send an email to ipogyo@buddhism.or.kr.”

In addition, certain festival programs offer tourists and foreign residents the chance to learn about Korean culture. These programs include the Traditional Cultural Event, in which participants can take in the hundreds of lanterns displayed in front of Jogye Temple in central Seoul and play traditional Korean folk games.

To give the festival more international prestige, the Lotus Lighting Festival has organized a group of Yeondeunghoe global supporters, who will be tasked with promoting the event and assisting participants during the festival. The volunteer program, established in 2013, has selected 150 volunteers this year - 75 Korean and 75 foreign youths from 40 countries, including China, the United States and Germany. 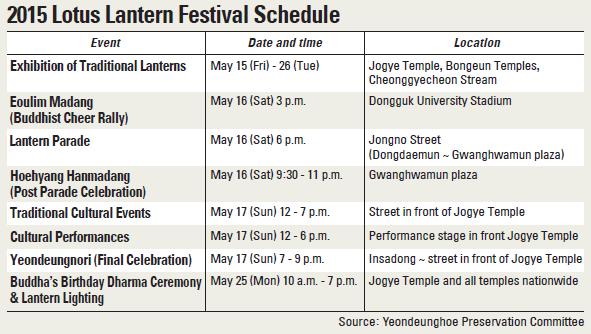 “I am honored to be a supporter of the Lotus Lantern Festival, Korea’s representative festival,” said 25-year-old German student Katrin Buxtrup, who came to Korea as an exchange student at Ewha Womans University. “It will be a memory that will last forever and I’m really excited about it.”

“I first heard about Yeondeunghoe Global Supporters two years ago and I have been meaning to take part in the program. I’m very happy to finally work as a volunteer to guide Spanish tourists coming to see the Lotus Lantern Festival,” added 21-year-old Ana Fernandez, from Spain, who is studying Korean at Ewha Womans University.

Separate from Yeondeunghoe, another lantern festival will be held for the first time on May 9 at Historic Site No. 116, the Haemi Castle in Seosan, South Chungcheong, to celebrate the birth of Buddha.

The festival consists of cultural performances and religious ceremonies that will run from 2 p.m. to 9 p.m.

Similarly, the event aims to convey a message of peaceful coexistence, reflecting upon when Catholic missionaries and believers were persecuted in the Haemi Castle during the Joseon Dynasty (1392-1910).