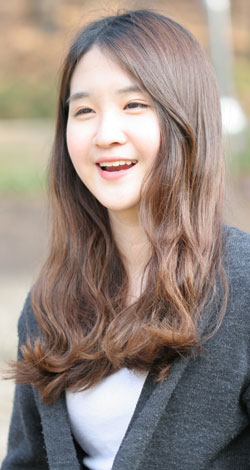 Kim Seong-bin, now 19, has painful memories from when she was a high school student.

She was shunned and bullied by her classmates. Every time she saw her peers looking at her with contempt, she recalled feeling like those looks alone could kill her.

She was alone all the time.

Kim admitted to having suicidal thoughts, but often when those ideas would consume her, she would remember what her parents told her: “Even if you make a grand mistake, we will always protect you.”

Now an adult, Kim decided to launch a mobile application to give advice and encourage young bullied students, just as her parents supported her.

That’s how the app Holding Five came about.

The name is two-fold. First, it refers to the “holding effect,” a psychological term used to describe the way babies are comforted when in contact with their mothers. It is also based around an account Kim once heard that states that suicidal thoughts can be alleviated if a person listens to music for five minutes.

The name of the application is supposed to refer to a tight, long motherly hug.

The app allows a user to upload his or her stories anonymously - anything about school life.

Some talk about school bullying, others lament that they are simply having trouble getting along with new friends because they are too shy.

In return, anonymous comments are made below the posts that provide effective solutions or advice for adjusting to their lives in school. App users recently surpassed 4,000 since its launch in August 2014.

“A trivial misunderstanding with my friends caused me to be bullied and completely left me deserted from all my classmates,” Kim said of her life in high school. “I thought at the time that this is just like a game that ends when someone dies.”

Her parents, she added, were the only people she felt she could rely on.

“They looked for a counselor, and told me how to respond when my friends bullied me,” she said. “If my parents had just told me it was trivial, just a fight with my friends, I wouldn’t have been able to bear it.”

After a year, with support from her parents, Kim managed to correct the misunderstanding with her friends and overcome the bullying at school. But even still, in her third year in high school she got the idea to help students, like her, who were being ostracized.

Her father initially dissuaded her to launch the app, instead urging her to focus on preparing for the university entrance test.

“Dad, why do adults always say they’re sorry they couldn’t protect us when everything ends badly?” Kim remembered arguing. “That they weren’t with us when we desperately needed them?”

Preparing for and launching an application was tough, however, she said. She proposed her idea to an IT company first, asking representatives there to help her launch it free of charge.

To seek out advisers, she called up major broadcasting corporations and explained she was looking for famous mentors to help embattled teenagers.

Many came to her aid, and a few high-profile public figures and celebrities even agreed to participate on the app, including singer Kim Tae-woo, and Gang Ji-won, a renowned lawyer.

Last year, the first user uploaded the post, “Which one do you like better: jajangmyeon (noodles in black bean sauce) or jjambbong (noodles with spicy soup and seafood)?”

But after a slew of ridiculous questions, members eventually got serious and related real school stories - on everything from dating to family disputes and school violence.

Many students, Kim said, also post comments about how they generally feel lost.

But even now, as a freshman this year at Seoul Women’s University, she said she can still vividly recall the painful memories of being bullied in high school.

With emotional scars still remaining, she said she was simply trying to help those in the situation she was in five years ago. Holding Five can help, Kim added. It’s a start.