[Cooking with Her Excellency, USA] Surf and turf offers best of both worlds

[Cooking with Her Excellency, USA] Surf and turf offers best of both worlds 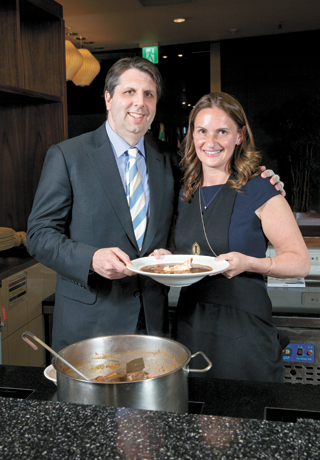 U.S. Ambassador to Korea Mark Lippert and his wife, Robyn, share a “surf and turf” dish at the InterContinental Seoul COEX in southern Seoul last month. By An Sung-sik


Robyn Lippert, wife of the U.S. ambassador to Korea, can be described as a super mom.

Since arriving in Seoul with the U.S. Ambassador Mark Lippert last October, she has been working long-distance as a senior vice president in external affairs at UnitedHealth Group, a leading American health care company. She gave birth to their firstborn son, James William Sejun Lippert, in Seoul in January, and they recently celebrated his first 100 days. The Lipperts also have been spotted frequenting local restaurants, hiking and strolling downtown with their cuddly basset hound, Grigsby, mingling with the public.

The couple’s culinary adventures, including bulgogi (marinated barbecued beef) and samgyetang (chicken and ginseng soup), are well documented on their bilingual blog, “The Lipperts in Korea.” The two first met when they were both working for U.S. Sen. Patrick Leahy of Vermont.

Robyn Lippert took on the challenge of introducing a representative American cuisine - no easy feat considering the diverse options available - pairing up with Chef Na Eun-sun of the Asian Live restaurant at the InterContinental Seoul COEX in southern Seoul.

As a New Englander and meat-lover, Lippert answered the age-old dilemma of beef or seafood by choosing “surf and turf,” a hearty beef and vegetable stew accompanied by lobster tail. 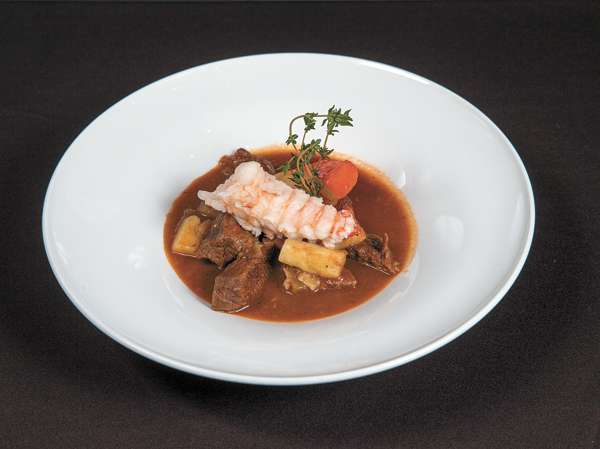 Ambassador Lippert, still recovering from injuries from the shocking knife attack in March, joined to taste the Korean and American dishes cooked by Na and his wife.

“We have a custom in Korea to avoid tough or hard food after giving birth,” said Na. “As Mrs. Lippert recently gave birth, I thought of a main dish that is tender and chose tteokgalbi, made out of minced beef rib meat.”

She added, “It is commonly said that tteokgalbi dates back to the Joseon era [1392-1910] and was prepared for the court ladies in the royal palace. Its shape was wide and thin like sirutteok [steamed rice cake], hence the name tteok [rice cake] galbi [marinated beef short ribs] came about.”

Though Ambassador Lippert has tried tteokgalbi before, he added, “This is the most tender that I’ve had. The portion size and presentation over the bone is different and interesting, and it’s quite flavorful.” While his favorite is bulgogi, the U.S. envoy said he enjoyed the slightly more bitter flavor of tteokgalbi.

The following is an excerpt of an interview with Robyn Lippert.


Q. Please describe American cuisine and that of your home state.

A. American cuisine is truly diverse, so first I’ll tell you a little bit about the food from my region. I’m from New England, the northeastern part of the country, which is known for its hearty dishes, like what we’ll be making today, and delicious cold-water seafood. Many of you have probably heard of New England clam chowder and Maine lobster. One interesting thing about American cuisine is that with immigration, it’s always changing. Some of my favorite American dishes are actually fusion dishes such as bulgogi tacos or the California roll.
Vermont’s state food is apple pie. It doesn’t get more American than that! We also love our maple syrup and apple cider. I do think maple syrup makes all the difference when you make brunch.


Why did you choose today’s dish?

I wanted to highlight two of my favorite foods, steak and seafood. Surf and turf is an entree that includes a portion of seafood (the “surf”) and a portion of meat, usually steak (the “turf”) - this way you get the best of both worlds! And it can be prepared using a range of different seafood and meat cuts. Today’s dish is one of my favorites in part because it can be prepared either the day one eats it or in advance. Also, it contains a number of my favorite foods - tender American beef, delicious lobster (of which New England has some of the best) and Idaho potatoes.

My husband and I both love to eat steak. Rocky Mountain Steak is delicious and easy to find in grocery stores in Korea. Also, the price is very good and it’s quite easy to cook. Nowadays you can also buy delicious American lobster in Korea. Some herbs and spices can be hard to find but sometimes are available at large department stores. 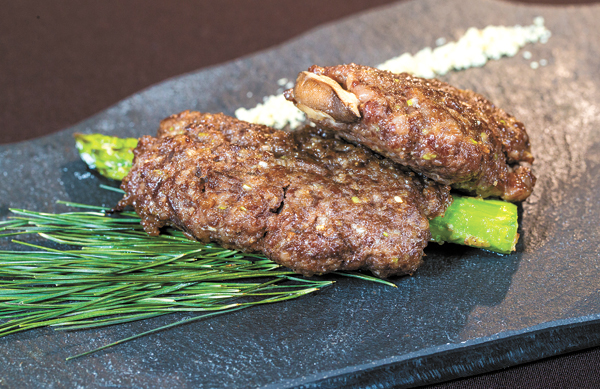 I do love cooking and baking and did a lot when I was in Washington, and Mark is quite a good cook. Being in Korea, I try to incorporate many more Korean foods into what I make, such as kimchi or kimbap (seaweed rice rolls), which we take if we go hiking. My husband and I love spicy food so it is great being in Korea.

What Korean dishes are you and the ambassador fondest of and why? 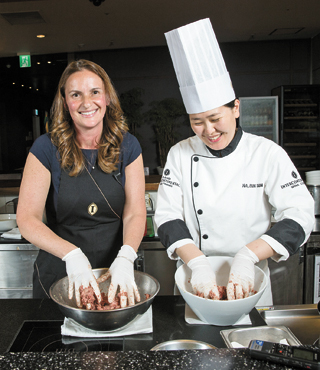 Chef Na Eun-sun at the InterContinental Seoul COEX in southern Seoul shows how to make tteokgalbi.

We really love Korean-style barbecue. This is something we already ate as much as possible when we were living in the United States. At some restaurants in Seoul, you can get Korean barbecue made with American beef.

Once Sejun gets bigger, my Korean friends have recommended he try tteokgalbi and jeonbokjuk (abalone porridge). And I’m sure he will absolutely love bulgogi like the rest of the family!

Do you have a favorite Korean dish to cook, or what dish would you like to learn to cook?

At the home of some Korean friends, I really enjoyed bibimbap (spicy rice mixed with vegetables) and would love to learn how to make it so that I could serve it myself. I also think it would be great to be able to make geotjeori (fresh kimchi salad) as it has such a refreshing taste.

Are there any similarities in the dish you cooked and Korean cuisine?

Koreans also are big lovers of beef and seafood. I think these are dishes that Koreans could easily make at home for their families. They could also try to add some additional Korean ingredients to make their own fusion cuisine.

Please give us your personal observations about Korea.

Korea is one of the warmest, most welcoming countries I’ve visited. We have really felt Koreans’ kindness and friendship since we arrived. As much as possible, my husband and I try to engage in people-to-people diplomacy when we are out and about in Korea. One of these opportunities is when we take our basset hound, Grigsby, for walks. We try to meet local Koreans on these walks and interact with a wide range of people. In this way, we think we can get a true sense of the richness of Korea.

Korea is such a beautiful and diverse country, and my husband and I hope to travel as much as possible to the various regions. As my husband has mentioned, he has made it his personal goal to visit every Unesco World Heritage Site in Korea.

Which place in Seoul do you and the enjoy visiting the most and why?

One of our favorite activities in Seoul is hiking. I would have to say the mountains around the city are our favorite part of Seoul. We love having a chance to explore the city while getting some great exercise for ourselves and Grigsby and teaching Sejun about nature.

As senior vice president of external affairs at UnitedHealth Group, Robyn Lippert focuses on effectively positioning the Fortune 500 health care company with key audiences. Lippert has been with the company since 2009. Her previous experience in the private sector includes working in government and industry relations at Fannie Mae and The Glover Park Group, a strategic communications firm. In addition, Lippert has worked on various political campaigns, including as a State Director for John Kerry’s 2004 presidential campaign. Lippert graduated from the University of Vermont.

Mark Lippert became ambassador to Korea in October 2014. He previously held senior positions in the U.S. Department of Defense from May 2012 until September 2014, including chief of staff to Secretary of Defense Chuck Hagel and assistant secretary of defense for Asian and Pacific security affairs. Before joining the department, he completed a two-year mobilization on active duty in the U.S. Navy. He also served as a foreign policy adviser for President Barack Obama. Lippert’s military awards and decorations include the Bronze Star Medal for his service in Iraq. He graduated Phi Beta Kappa from Stanford University with a B.A. in political science and holds an M.A. in international policy studies from the same institution. He also studied Mandarin Chinese at Beijing University.