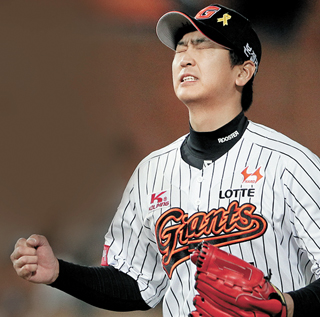 In an April 23 game between the Lotte Giants and Kia Tigers in Gwangju, the Giants were leading 5-2 until the sixth inning. Shim anticipated notching his first victory since August 2011 and breaking his 10-game losing streak.

In the bottom of the ninth inning, however, the Giants bullpen allowed five runs and lost the game 6-7.

A similar drama played out in Shim’s first game of the season.

On April 10, the 34-year-old started against the Hanwha Eagles, and for five innings he didn’t give a single earned run. With the Giants leading 8-2 by the seventh, it looked certain that Shim would get his win. But the Giants’ bullpen allowed a single run in the eighth inning and five runs in the ninth inning to blow the lead, which also erased Shim’s opportunity to redeem himself.

But before becoming the “unlucky icon in the Korean Baseball Organization,” Shim was one of the most promising pitchers in the league.

While the right-hander was playing in Baemyeong High School, he reportedly received an offer from a Major League Baseball club. With his handsome-looking face, Shim was already receiving attention when he signed a professional contract with the LG Twins in 2004.

But after collecting 10 wins with the Twins in 2006, his career slipped. From 2009 to 2011, the Hanyang University graduate failed to get a single win. Instead, he earned 18 consecutive losses - the KBO record for most consecutive losses for a pitcher.

He broke the winless streak with the Nexen Heroes, but didn’t continue to impress. Shim’s slump kept up after moving to the Giants in 2013, and he even moved to the Giants’ minor league team.

Shim last year considered retiring, but decided to give it one last shot by changing his pitching form. Originally an overhand throwing pitcher, now he has a three-quarter pitching style.

He’s doing well so far. This season, he’s thrown 24 innings in seven games, getting one loss and one save with an 1.88 ERA.

Shim recently has changed from starter to closer for the Busan-based club. Against the Heroes on April 30, he collected a save after shutting down his opponent in three innings. He also had clean-sheet pitching against the Eagles on May 3, the Wyverns on May 7 and the NC Dinos on Sunday.

Giants manager Lee Jong-woon said that the team will use Shim as a closer this month and will keep him on as the last pitcher if he performs well.

Q. It appears that it’s still difficult for you to get a win.

A. It’s not that my teammates are purposely making errors or giving up runs. They play hard but aren’t seeing results - just like me.

What has changed most for you this year?

Last year, I was a mop-up pitcher who took losses for the team. Even if I had a shutout innings, it didn’t really matter. However, I was thinking to myself that I’m becoming better and I worked hard last winter.

Your new pitching style seems to be working.

Last year during training, I threw the ball with a lower arm stance just for fun - but the speed of ball was actually faster than usual. Even manager Lee Jong-woon joked, “You can play baseball for five more years with this style.” As I mix overthrow and sidearm pitching, I think I can confuse batters.

You tried to quit baseball last year. Why?

Last year, I went to see the club official and quit. I packed by belongings and went to Seoul, but my mother cried and said, “Will you always be a quitter in your life?” I returned to the team after that.

How would you feel if you finally managed a victory?

I think I would act calm. When I was having a 18-game losing streak, I was really stressed. Some people even mocked me by saying that “most pitchers couldn’t lose 18 games in a row if they wanted to.” I had sleepless nights. But now, I’m just satisfied that I can still pitch and put up a fight.

You are recognized as an “unlucky icon” in the KBO. How do you feel?

I know that I’m not particularly lucky when it comes to getting victories (laughs). But still, I think I can pitch with the support of my fans.

You received lot of attention because of your handsome looks.

When I don’t play well, people often say, “He’s nothing but a handsome face.” Some people think I don’t train hard. But I’m a player who always works hard. When I was a senior in high school, I threw 1,000 pitches a day. Even to this day, I sometimes pitch until dawn.