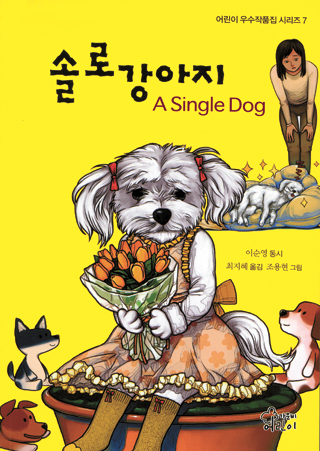 The cover of “A Single Dog,” which features poetry written by a 10-year-old, has sparked controversy for one poem’s violent content.

The controversy over a poem penned by a 10-year-old that contains violent content is still ongoing almost a week after its publisher said it would recall and destroy all the copies of the collection for young children that features the piece.

The graphic imagery of the poem “The Day I Hate Going to the Academy,” in which an elementary school student seems to suggest her mother should be boiled and eaten for sending her to after-school classes, continues to raise ethical questions about how to treat literary works of this nature by young writers.

The poem, which reads, “When I don’t want to go to the academy / Just like this / Chew on Mom / Boil her, bake her / Eat her eyes up / Pull out her teeth / Rip off her hair / Turn her into sliced meat / If she cries, lick her tears / Keep her heart for the last course / It’s most painful that way,” was written by Lee Soon-young.

It is featured in “A Single Dog,” a collection of poetry by the young author that was released in March by Gamoonbee Publishing Company.

An illustration of a girl eating a heart on a floor covered in blood accompanies the poem, perhaps adding to the visceral reaction it incited.

Internet commenters - especially mothers - on many online blogs and forums have shown their discomfort over the content, with some even suggesting that Lee’s mental health should be assessed by professionals. 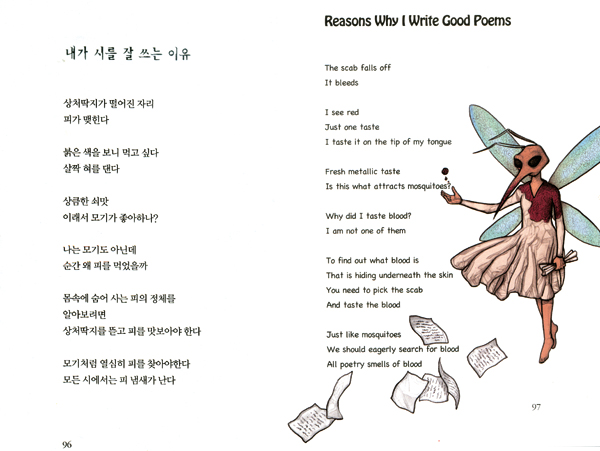 Others have voiced support for the 10-year-old, however, with some individuals saying she has a very unique way of expressing her feelings and that her high level of writing is far more mature than her age would imply.

“Moms are outraged,” said Park Jeong-yoon, a mother of two children who are in elementary school and middle school, after hearing about the poem.

“Because the poem’s target readership is elementary school students, alongside the fact that it’s not just a one-time disposable poem circulating online but printed material.”

The mother said she would allow her child in middle school to read the poem but felt that her elementary school child was too young to see it.

“Writing a poem could be one way for a mother and a child to communicate and express his or her feelings, but I think it shouldn’t have been printed and published to be widely read,” the mother added.

On Tuesday, a day after a local newspaper Segye Ilbo published a report about the book, Gamoonbee Publishing Company said that it takes full responsibility for choosing to release the controversial compendium. 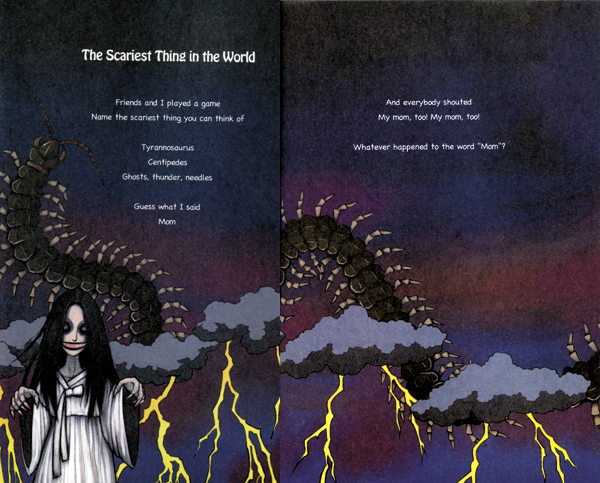 About half of its 2,000 copies have already been sent to online and offline stores.

“We have received much criticism and complaints about some content of the book going over the threshold of what [an ordinary person] takes as freedom of speech and that particular writing can have a negative influence on children,” said Kim Sook-bun, the president of the company.

Another official at the small publishing house, which has four employees, said they had held a discussion regarding whether the poem should be included in the book.

“The writer and her parents expressed their strong will to publish that particular poem, and we all kind of expected that there could be some criticism raised against the piece,” said the official, who refused to be named.

“Since not all the poems in the book contain such controversial content” the official continued, “we made a judgment call, but in the end that was a mistake.” 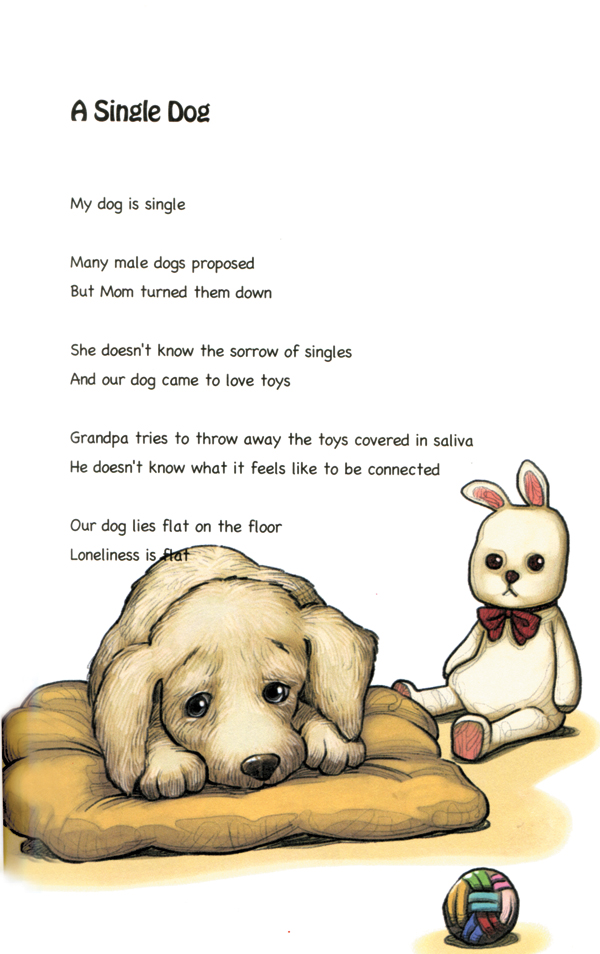 This is not the first time that Lee, who has received an award from a local children’s literary competition in the past, has had her work published. She has co-authored a book with her older brother and her mom, who is also a poet.

This collection is her third published work.

“If you are only focusing on the exterior of this poem, you are missing the essence,” Lee’s mother, Kim Ba-da, told the Korea JoongAng Daily in a series of phone calls late last week. “The poem is written to criticize the Korean society where kids are pushed to attend private academies, and there is no reason for the writer to take all the blame.”

She claimed the guilt of parents, who may have pushed their children too hard due to Korean society’s fervor for education, was what triggered the mass upset over the published poem.

According to a survey of 3,000 parents by the Korea Consumer Agency, which was released in February, 37.9 percent of elementary school students attend academic sessions outside of ordinary school three to four times a week, while 33.6 percent go to such classes five to six times a week.

More than half of the students who receive additional education do so at private academies widely known as hagwon. 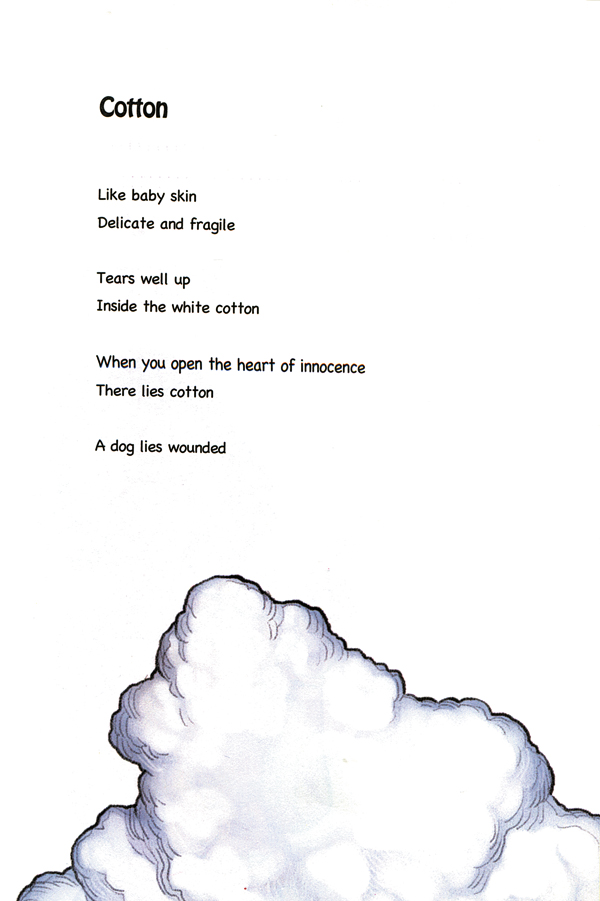 English is the most popular subject, with 73.5 percent of the students referenced in the survey attending such classes.

Lee wrote the poem based on her experience attending English hagwon, which led her mother to withdraw her from the academy.

“While friends of Lee said they enjoyed the book and were not affected by it, moms are cursing and are getting angry,” Kim said, adding that she was also shocked when she first read her daughter’s poem.

“That anger should be angled toward the moms themselves, not at us, and that’s the uncomfortable truth here.”

Kim filed an injunction to stop the publisher from destroying the books at the Seoul Central District Court on Friday but announced on Sunday she would drop the case. She said she does not want further controversy to rise over the poem because of criticism from Christian groups who have denounced the book as the work of the devil.

The family, who also identifies as Christian, has decided to respect the publisher’s decision.

“Maybe we should have put a subtitle that says this is a bizarre and a horror collection of children’s poems,” said Kim, “So that people could have known this from the beginning that this poem may have an unusual way of unraveling stories.”

Many literary experts and critics are advocating the idea that the poem is just a symbolic description of Lee’s observations rather than her “malicious” desire to harm her mother.

“Adults who believe that children have an angelic peace of mind will be offended by the poem,” said professor Chin Jungkwon, a professor at Dongyang University and a political and cultural commentator.

“Children don’t get ruthless from reading a poem but learn cruelty as they watch their parents alienating a child online.”

Heo Hee, another literary critic, said that Lee has merely expressed her feelings in a straightforward way. He believes the expression might be shocking in the eyes of adults but says if that is how children see the world, then adults should respond accordingly.

“The mother in the poem could be the symbol of a greater power that stops a child from doing things as she desires, not the biological mother,” he said. “It is the job of adults to direct young readers on how to understand the given text and have an open discussion on hidden meanings.”

He added that the illustrations accompanying the poem overpowered it.

The illustrator of the drawing refused to comment on his work, Lee’s mother said.

A psychological expert said children can have a harder time understanding why they are sometimes stopped from doing the things they want to do.

“Adults come under the same level of stress when they know why they are being picked on by their bosses without an explanation,” said Kwak Geum-ju, a psychology professor at Seoul National University.

“The same goes for children. They may get more stressed when they don’t understand why they have to study or go to private academies ... and such oppressed feelings come out in writing or painting.”

She said that Lee may need psychological help if she continues to write much about her anger in such a way later in the future but explained that she is not too worried about her current state of mind.

“Since it is hard to express something without actually experiencing it, although this doesn’t mean she would become violent just because she wrote such things, this for sure means that she has felt all those feelings at one point,” she said.

“But most elementary students develop ideas about death and suicide, which doesn’t mean they will actually do anything about it. What’s important here is that she felt what she wrote at one point, and if feeling such emotions continues over the course of a few years, then I would recommend the child should get professional help.”

Other onlookers who have read other parts of Lee’s book have commented on the outstanding command of expression the young author has.

The compendium’s titular work, “A Single Dog,” includes the phrase “Loneliness is flat,” which has been lauded by critics who describe it as a fresh delivery of how one actually feels when they are lonely.

A critic the Korea JoongAng Daily reached out to refused to comment further on Lee’s talents as he said he has not yet extensively read Lee’s work, but he did say that she does not write as everyone else does.

All the poems in the book have been translated into English.

Lee’s parents requested that Korean and English versions of the works should be juxtaposed so that they can not only speak to a wider range of readers, but also give local children a chance to learn English.

The publishing company usually releases electronic versions of all their paper books, but it has put an indefinite halt on producing one for this particular book.