Aiming to restore diplomatic ties with an old foe

Aiming to restore diplomatic ties with an old foe 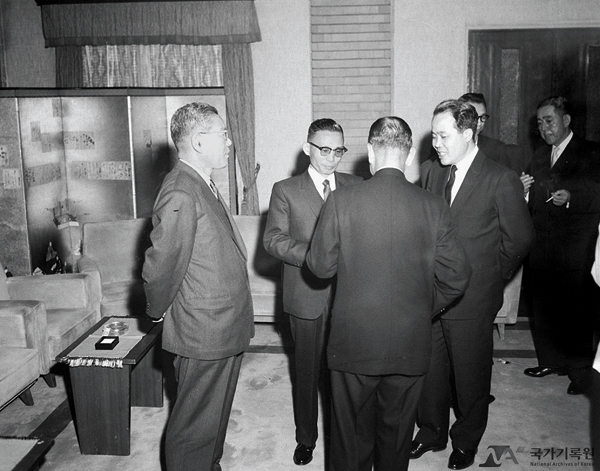 Chairman Park Chung Hee of the Supreme Council for National Reconstruction, second from left, meets with Prime Minister Hayato Ikeda of Japan, far left, during his visit to Ikeda’s official residence in Tokyo on Dec. 11, 1961. The next day the two statesmen held a summit and agreed to speed up the process for opening diplomatic ties. [National Archives of Korea]

My anxiety was growing deeper over the pace of the country’s national development in the fall of 1961, about five months after our military revolution [coup]. The revolutionary government had its hand on political stability but was still struggling to come up with a blueprint to improve the poverty-stricken economy.

As my concerns grew, U.S. President John F. Kennedy formally invited Park Chung Hee to Washington for a summit on Nov. 14. I tried to use the talks in Washington as momentum for a breakthrough in stalled negotiations with Tokyo over normalizing diplomatic ties.

I had come to the conclusion that we badly needed money from Japan in the form of compensation for its 36-year colonial rule over the Korean Peninsula, which could be spent on initiating an economic development plan. It was a judgment I had nurtured for a long time by then.

As the head of the Korean Central Intelligence Agency, I launched a covert channel to push for a meeting with Hayato Ikeda, the Japanese prime minister at the time, to bring the two sides to the negotiating table for the diplomatic normalization process. 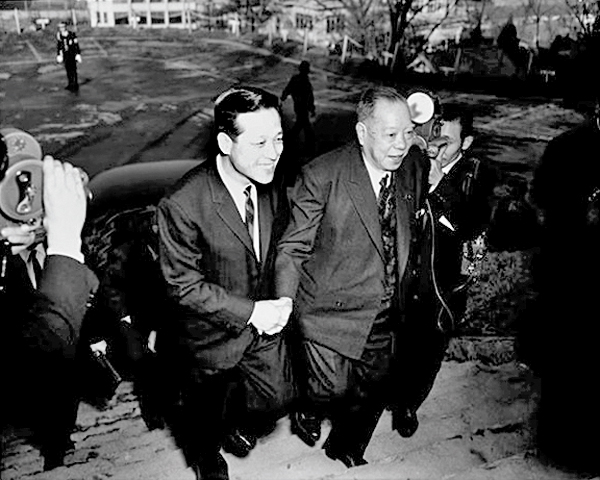 Kim Jong-pil, left, greets Banboku Ono, then the vice chairman of the Liberal Democratic Party in Japan during the Japanese politician’s visit to Seoul in December 1962. Ono was strongly in support of Seoul and Tokyo forging diplomatic ties. [JoongAng Photo]

I briefed Park when I was at the final phase of reaching a deal for talks but made sure no one would know about my diplomatic efforts. Resuming Seoul-Tokyo talks was something very sensitive given high anti-Japan sentiment. I figured nothing good would come out of a leak. I had already witnessed those around Park try to derail a number of projects, lacking sufficient reasons.

On Oct. 24, 1961, I checked in at the New Palace hotel, right next to the Tokyo Imperial Palace. Central Tokyo was illuminated by numerous headlights, and every household appeared to have television antennas.

Overlooking this contemporary capital, I became more resolved to make Korea as modern as Japan, no matter how difficult and challenging it would be.

“Renormalizing diplomatic ties between Seoul and Tokyo is an objective of utmost importance. I am here to resolve this complex issue by offering to host a summit, not to have talks just for the sake of having talks.”

Ikeda agreed that forging official Korea-Japan relationship was vital for both nations.

“If Park comes to Tokyo, we will welcome him as the head of a nation with utmost respect.”

Then I requested he send a special envoy, along with a hand-written letter of invitation, to Park for the meeting. Considering unfavorable sentiment in Korea toward Japan, it was a necessary formality that Park accept Japan’s request for a summit. Ikeda, a veteran politician who laid the groundwork for Japan’s rapid economic growth after World War II, knew full well the flow of history. He agreed to send a special envoy to deliver the request.

Ikeda soon sent one of his confidants to formally invite Park to Tokyo, and on Nov. 12, they held a summit.

During the press conference following their meeting, Park said he would remain flexible when negotiating the drawing of a maritime border with Japan if Tokyo was sincere in offering compensation for its occupation (1910-45) over the Korean Peninsula.

The primary objective for restoring diplomatic ties with Tokyo centered on getting compensation for colonial rule. It was important that we would be compensated for the exploitation of labor and resources as well as the suffering inflicted on the Korean people by the Japanese. To Japan, a delay in forging official relations would only mean it would be cornered further on the negotiating table.

To Korea, it was also a risky bet considering high anti-Japan sentiment. Because of such immense pressure, everyone in the Korean government hesitated to move forward to sign a deal.

Under these circumstances, I thought to myself, “Let’s commit to signing this deal. After I put my life on the line for the success of the revolution, what am I truly afraid of? I act to further enhance national interest. I will chart a new path. I will come out with new ideas and bravery.”

It was only that I told Park of my resolution for a breakthrough in the Seoul-Tokyo relations. I met Ikeda for a second time in October 1962, when talks for normalization of ties were gridlocked over the idea of compensation.

I figured that the only way to break the stalemate was to hold a political negotiation. On Oct. 21, 1962, I again met with Ikeda in Japan. During the meeting, heavy responsibility fell on Japan for the division of the two Koreas.

I told him that Japan’s delay in accepting the Allies’ demand made at the Potsdam Conference on July 26, 1945, contributed to the division on the peninsula because it led the Soviet military to declare war on Japan and to advance into the northern part of the peninsula, eventually resulting in the division of North and South Korea.

I continued that had there been a wise leader with prudence and deep insight in Japan, Japan would have accepted the terms of surrender and therefore prevented the atomic bombings on Hiroshima [Aug. 6, 1945] and Nagasaki [Aug. 9, 1945]. Those deadly bombings, I told him, were brought upon the Japanese by themselves.

I emphasized the importance of having a leader with foresight in making my point that he needed to step forward in accepting our terms for compensation. I told him history had taught us that missing the right timing to achieve something always resulted in damage later.

“You didn’t have a wise leader back then, and that caused the division on the peninsula,” I said bluntly and without a diplomatic tone.

“Contribute more in compensation for reopening ties so our nation can recover from the suffering inflicted upon it during colonial rule.”

He stared at me for some time without speaking a word and then suddenly asked how old I was. I told him I was 36. Nodding his head, he told me I reminded him of Okubo Toshimichi, an influential Japanese statesman revered as one of the founders of modern Japan, who led the Meiji Restoration. He was 36, the same age as I was, when he stood up to overthrow the Tokugawa Shogunate.

It was former Prime Minister Ikeda who played a pivotal role in paving the way for Korea and Japan to forge a new relationship. After all, it was Ikeda’s guidance under which my Japanese counterpart came to the negotiation table to open up diplomatic ties.