Ex-PM comes in for questioning

Ex-PM comes in for questioning 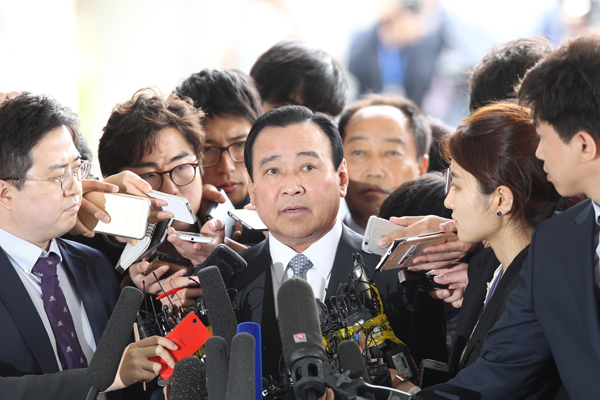 Former Prime Minister Lee Wan-koo appears at the prosecution on Thursday to be questioned on accusations that he received money from businessman Sung Wan-jong prior to the 2013 by-election. By Kim Seong-ryong

Former Prime Minister Lee Wan-koo appeared at the prosecution on Thursday to submit to an investigation into allegations that he had received money from a construction tycoon in 2013 to finance his election campaign.

Lee was the first political ally of President Park Geun-hye to be questioned in an unfolding scandal involving the late businessman Sung Wan-jong.

The former premier faced a group of reporters outside the High Prosecutors’ Office in Seocho-dong, southern Seoul, where the prosecution’s special investigation team is based, around 9:55 a.m. on Thursday.

“I regret having troubled the nation,” he said. “In this world, nothing can beat the truth.”

While refusing to answer questions over whether he had accepted money from Sung, Lee said, “I will speak about my position in detail to the prosecution, and I expect this issue to be resolved smoothly.”

Investigators will focus on the accusation that Sung paid 30 million won ($27,503) to Lee on April 4, 2013, on the eve of the legislative by-election in which Lee won a seat to represent Buyeo-Cheongyang in South Chungcheong.

He is the second politician to be questioned by the prosecution in a bribery case that has shaken the political establishment over the past month.

Sung, the former chairman of Keangnam Enterprises, was found dead on April 9 amid a corruption investigation. Before his death, the businessman dropped a series of bombshell revelations against high-profile politicians, including key associates of President Park, saying he had given money to them for years.

A 56-word note was found in Sung’s pocket after he was found hanged from a tree branch on Mount Bukhan, which included eight politicians - including Lee and South Gyeongsang Governor Hong Joon-pyo - next to the monetary sums he had allegedly paid them.

Hong, the first suspect in the case, was questioned last week.

Hours before his apparent suicide, Sung also told the Kyunghyang Shinmun he had given money to Lee when the former prime minister was running in the legislative by-election.

“During the by-election, I went to his campaign office and spent a half a day there,” Sung said, according to the interview transcript. “I gave him about 30 million won.”

While Sung did not detail during the interview the specific time and date the money was delivered, witnesses including former drivers for Sung and the former prime minister told the prosecutors that Sung visited Lee’s office on April 4, 2013.

While Lee adamantly denies the accusation, prosecutors over the week have continued to question witnesses and collect evidence.

A former secretary who assisted Sung for about a decade told the prosecution that he prepared the 30 million won in cash for Sung to be delivered to Lee. The former aide, only identified as Lim, 39, was questioned by prosecutors on May 6 and May 9.

According to the prosecution, Lim prepared 30 million won in cash in 50,000 won bills and wrapped them up for a convenient handoff.

Prosecutors also questioned another one of Sung’s secretaries, who accompanied the late tycoon to Lee’s campaign office, as well as Sung’s driver over the trip from Saturday to Monday. The secretary told investigators that Sung had ordered him by phone to bring inside a shopping bag from his car, though the aide was unaware at the time that it contained money.

Sung’s former secretary and his driver, as well as Lee’s former driver, all told the prosecution that Sung went to Lee’s campaign office in Buyeo sometime between 4 p.m. and 4:30 p.m. on April 4, 2013. The two men reportedly sat down alone inside the office to talk.

Until now, Lee has insisted that he had never met Sung and that he was visiting another campaign office in the nearby county of Cheongyang. He added that he never took any money from the late businessman.

Park tapped Lee - a politician who built his career in the Chungcheong region, climbing his way up from police chief in the small village of Hongseong - to serve as prime minister in February after a series of botched nominations for the post.

He also served three terms as a legislator and was also South Chungcheong governor. Lee resigned from his prime ministerial post on April 27 due to the allegations.