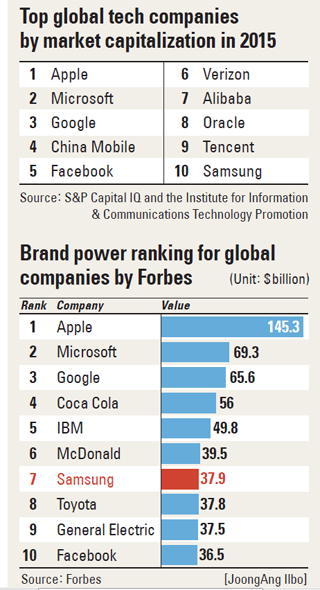 Samsung Electronics continues to slide in a global ranking that measures market capitalization, securing the No. 10 spot this year, according to Korea’s Institute for Information and Communications Technology Promotion, which cited S&P Capital IQ.

The tech powerhouse posted a market cap of $189.7 billion as of May 1, a notch down on the same survey compared with last year despite a $178 billion market cap increase.

Apple retained the No. 1 spot for the fourth consecutive year, followed by Microsoft and Google. The two companies were distant runner-ups, as Apple’s market cap is almost twice as much as theirs. The iPhone maker has $742.9 billion while Microsoft and Google posted $394.7 billion and $371.5 billion, respectively.

The country’s largest conglomerate has seen its ranking fall for the third year straight, apparently due to slowing sales in the smartphone business that used to drive its profits.

Three years ago, Samsung ranked sixth and then fell to seventh place in 2013. It came in ninth last year.

While Samsung Electronics struggles, Chinese tech and telecommunications companies are expanding their presence.

Just three years ago, only one Chinese company, China Mobile, was on the top 10 roster. Boosted by the robust growth in China’s e-commerce market, Alibaba entered at No. 3 last year.

Besides the trio of Chinese players, six of the top 10 businesses were based in the United States.

The state-run institute said the Korean company needs to bolster its competitiveness and support other local companies to secure a higher spot on the list.

“As the only Korean company in the top 10 list, Samsung Electronics struggles to maintain its position, so we need to foster other corporations with strengths in new, untapped businesses to better compete with global tech companies,” the institute noted in a statement. “To remain competitive in the face of U.S. and Chinese rivals, local companies should seek ways to distinguish themselves from their competitors.

Samsung Electronics ranked seventh on Forbes’ World’s Most Valuable Brands survey, published on Wednesday, with Apple reigning at the top.