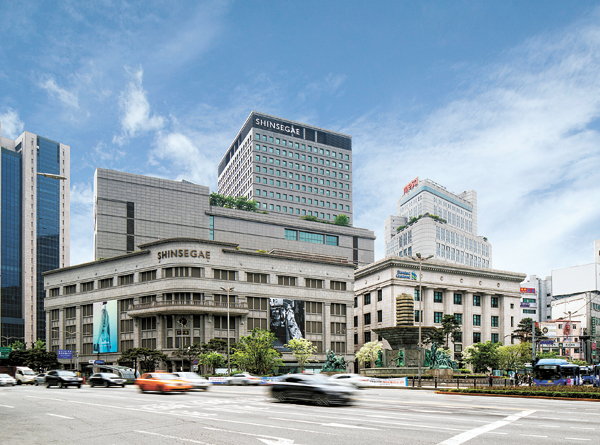 Shinsegae’s main building in downtown Seoul, which it plans to convert into a duty-free shop. Provided by the company

Shinsegae and E-Mart have sold a chunk of their shares in Samsung Life Insurance in a block deal, securing liquidity necessary for investments in new businesses and revamping existing facilities.

Shinsegae and E-Mart sold Samsung Life shares worth 655.2 billion won ($601.1 million) at 109,200 won apiece, a 6.2 percent discount from Thursday’s closing price of 116,500 won, in a block deal, Shinsegae said on Friday. Credit Suisse and JPMorgan were advisers for the deal.

Following the sale, Shinsegae controls a 2.2 percent stake in the life insurer, down from its previous 3.7 percent, while E-Mart’s stake has come down to 5.9 percent from 7.4 percent. Shinsegae declined to name the buyers but said 30 percent were domestic and 70 percent foreign.

Analysts say Shinsegae will likely use its proceeds from the sale - estimated at around 330 billion won - for investments in the duty-free business and new department store openings and renovations.

On Thursday, Shinsegae said it plans to convert its original department store building in central Seoul, which was Korea’s first department store when opened in 1930 by Mitsukoshi, into a duty-free shop.

The company has also purchased a building owned by Standard Chartered Bank across the street for 85 billion won to install a duty-free store and Hallyu-themed cultural museum.

“The duty-free business is the hottest among retailers nowadays,” said Yu Jung-hyun, an analyst at Daishin Securities. “They are quite desperate to get into it.” Margins at duty-free shops are around 15-20 percent, she said, compared to department stores’ 5 percent.

The sheer velocity of their growth is attracting retailers. The Korea Customs Service estimates Korea’s duty-free market to be worth 8 trillion won as of 2014, compared with 4.8 trillion won in 2010.

Competition for three Seoul duty-free licenses that are to be issued by the country’s custom’s office in July is growing fiercer by the day.

Most recently, SK Networks, which operates Walkerhill duty-free shop in northeastern Seoul, came up with plans to set up a duty-free shop in the Cerestar building in Dongdaemun, central Seoul. The building is expected to house both a hotel and an outlet operated by Hyundai Department Store.

Hyundai Department Store last month came up with plans to open a duty-free shop at its southeastern Seoul branch in Samseong-dong, which is at the center of the meetings, incentives, conferences and events complex that the Seoul Metropolitan Government is planning.

Hanwha Galleria also has plans for a duty-free shop at the 63 Building in Yeoeuido, one of the most popular shopping and entertainment arenas in the country, which is owned by Hanwha Life.

As for Shinsegae, winning the coveted duty-free license may not be so easy, analyst say.

For one, its location is too close to the existing duty-free shop operated by Lotte - within 5-10 minutes’ walking distance. And Shinsegae is also a relative newcomer to the duty-free business, having only recently started a duty-free shop at Gimpo Airport.

“And that is probably why Shinsegae has put the whole building on the table. Shinsegae is trying to show that they are serious about the duty-free business, and are willing to dedicate a lot of resources to make it a success,” explained Yu at Daishin Securities.