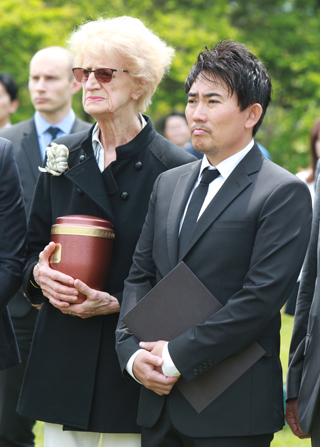 K-pop singer Lee Seung-cheol, right, attends the burial ceremony for Raymond Joseph Benard, a French veteran who fought in the Korean War (1950-1953), on Friday with Mrs. Benard, left, holding her husband’s remains, at the United Nations Memorial Cemetery in Busan. By Song Bong-geun

A French war veteran who fought in the Korean War (1950-1953) was buried in the nation of Arirang, the traditional song that he loved.

The United Nations Memorial Cemetery in Korea (UNMCK) in Busan held a burial ceremony for Raymond Joseph Benard on Friday. It said it was the first case of a foreign veteran’s remains being sent back to Korea for burial.

Benard fought for South Korea during the three-year war from November 1950 and returned to France on Jan. 1, 1953.

He died on March 1 at the age of 87. He told his family he wanted to be buried in Korea. His cremated remains were kept in an urn.

The ceremony on Friday was attended by Benard’s wife, two sons and a grandson as well as K-pop singer Lee Seung-cheol, who was close to the war veteran and even invited him to one of his concerts in Seoul in 2011. Also attending were about 20 people from the French Embassy in Seoul.

“I still remember Benard singing Arirang with teary eyes [at my concert],” Lee said in his remarks. “His sacrifice and affection for South Korea is so huge that we don’t even know how to repay it.”

Benard met Lee for the first time when he made a visit to Korea in September 2010. Lee, whose late father was also a Korean War veteran, gave one of his DVDs to Benard and they exchanged emails ever since.

Lee visited Benard’s house in France in April 2011 and invited him to his concert at the War Memorial Hall in central Seoul in August 2011.

Mrs. Benard said, “We are very happy that he was buried in Korea, the country he loved so much.”

The UNMCK is where those who died in the Korean War are buried. Currently, a total of 2,300 people from 21 nations have been laid to rest.

Some veterans who took part in the Korean War have asked to be buried in the cemetery, but no requests were granted because they did not meet the standards stipulated in the Korea-UN agreement for the UNMCK.

War veterans and their families, however, have constantly asked for approvals and the Commission for the UNMCK, which consists of members from 11 different countries, held a meeting after Benard died in March and decided to accept him as the first case.

Currently there are five war veterans who hope to be buried at the UNMCK, and the commission said it will convene meetings every time they receive such applications.