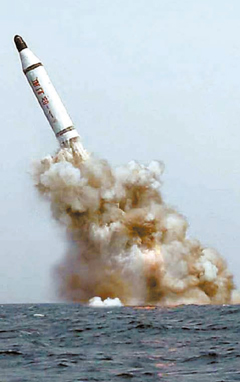 North Korea developed the launching device for its submarine-launched ballistic missile (SLBM) by modeling it on a Soviet-era device imported from a Japanese trade partner in 2003, the head of a South Korean defense think tank said.

Hong Seong-min, who heads Security Policy Networks, said in an interview with the JoongAng Sunday that Pyongyang developed the device based on equipment once used for a now-retired Soviet submarine.

The arms expert added that it was imported via a Japanese trade dealer, citing a U.S. Congressional report drawn up in 2006 as evidence for his conclusions.

The SLBM launching device is used to fire missiles from underwater.

“The North developed the device modeled on that Soviet-era device, which it used for its successful SLBM firing test on May 8,” said the defense expert.

Hong continued that the North succeeded to mount the device on a Sinpo-class, or 2,000-ton, submarine, as seen in an image of the missile launch that was published by the North’s state-run Rodong Sinmun a day after the test.

He said the South Korean intelligence agency gave the same report - that the North imported the critical device once used by the Soviets - to the National Assembly in an undisclosed meeting. Reports on the North’s pursuit of the SLBM technology, however, failed to draw wide attention until the reclusive nation’s May 8 test-firing of the missile, with the country’s leader Kim Jong-un overseeing it.

Prior to importing the submarine missile’s launch equipment, the North also purchased 10 retired Soviet submarines, each weighing 2,800 tons, through a Japanese trade dealer in 1993, according to Hong.

The North bought the submarines after the vessels had been stripped of their own SLBM missile launching devices by the Russian authorities.

Hong, a retired Army major, said the North had to purchase the device 10 years later through an unidentified Japanese channel.

So far, nothing has been revealed about the trading partner in Japan that the North allegedly used.

After analyzing Pyongyang’s test-firing of the SLBM, the South Korean Defense Ministry has come to the conclusion that the North could deploy submarines equipped with SLBM capability in two to three years, a scenario that could take the Communist regime’s nuclear threat to a new level.

Concerns are growing over the North running submarines with fully operational SLBM systems because of the much higher difficulty the U.S. and South Korean militaries will have in detecting and intercepting ballistic missiles from underwater compared to their ground-based counterparts.

The greatest fear centers on whether the North would be able to miniaturize a nuclear warhead that would be small enough, less than the weight of one ton, to mount on an SLBM system which will enable the Communist state to fire a nuclear missile in addition to conventional short- and long-range missiles.