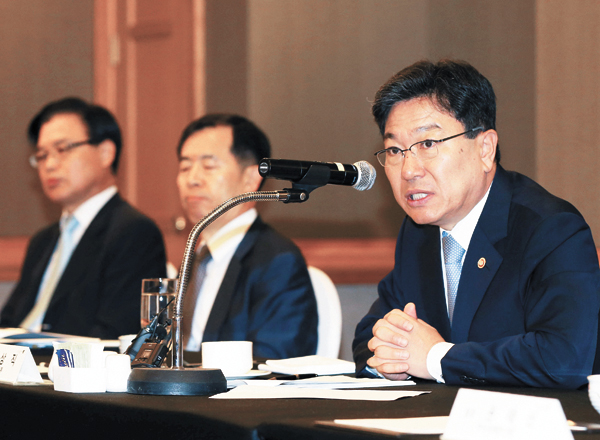 To counter the steady decline of exports, particularly to China, the Korean government is preparing to roll out new tax breaks and other support measures next month.

Minister of Trade, Industry and Energy Yoon Sang-jick announced the joint effort with the Ministry of Finance during a roundtable discussion on Monday in Seoul. Attendees included the heads of the Korea Institute for Industrial Economics and Trade (KIET), Hyundai Research Institute and other economic think tanks.

“Korean exports have been directly hit by external factors like the slowdown of global trade and low oil prices, and have performed poorly,” said Yoon. “Because structural changes like improvements in the Chinese manufacture industry and Korean companies’ expansion of overseas production are crucial factors in the export slowdown, I think it is time to adjust export policies.”

As for the argument that Korea should make changes in its export lineup revolving around value-added parts and materials while expanding the new products, Yoon said he will ensure eased guidelines to help companies make the best use of free trade agreements with India and Vietnam.

“Many Korean companies like Samsung Electronics and LG Electronics have recently moved factories to Vietnam,” said Yoon at a press conference. “The country will be Korea’s new strong partner.”

Also on Monday, the Bank of Korea released a report that warns of Korean exports falling far short of the global average. The report showed Korea’s export growth was slower than the world average last year for the first time since 2001.

In 2013, exports of finished goods to the United States inched up 3.3 percent, while those to Europe fell 3.7 percent.

The contraction in demand of developed markets can be attributed to greater uncertainty in the global economy, wider income inequality in major countries, stronger protectionist movements in global trade and reshoring of manufacturing facilities in advanced economies.

The report pointed out that Korean exports took a severe blow from the 2008 U.S.-triggered financial crisis and the euro zone crisis.

“Compared to pre-2007, Korean exports have been showing sluggish growth due to contracted demand in advanced markets, decreased trade of intermediate goods and fiercer competition with Chinese rivals,” it said. “Among the top 10 export items, petrochemicals, machinery and steel products are experiencing intense competition with their Chinese counterparts in particular.”

Although the nation’s exports are expected to recover gradually as the global economy seems to be reviving, starting with the United States, the aforementioned causes of flagging exports could serve as structural problems that drag further growth, the report said.