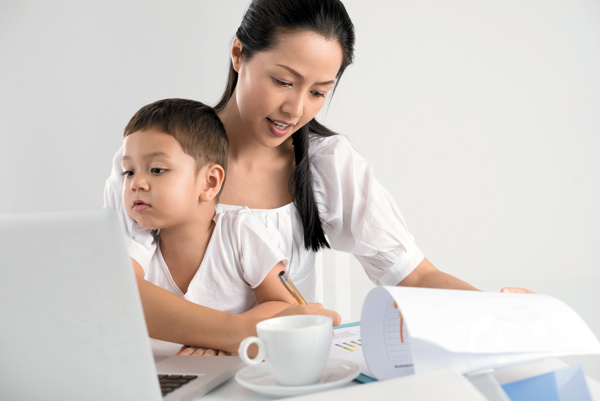 The majority of working mothers are unhappy with the contributions their spouses make to household chores and child care, while the majority of married men believe they are actively involved with the housework, a survey by a leading job portal showed.

In a poll of 644 working mothers by Jobkorea, nearly 22 percent said they were “very unhappy” with their spouses’ contribution to housework and child care, while 32.3 percent responded that they were “unhappy.”

The percentage of respondents who said they were happy was 19.2 percent.

When asked to measure their spouses’ contribution to child care and chores, 46.4 percent of working mothers said less than 30 percent, while 27 percent chose the 30 to 40 percent range.

In contrast, 65.6 percent of 273 married men surveyed said they were actively involved with housework and child care.

While recent government data showed more men were taking a leave of absence - double-digit growth was seen in Seoul, Daejeon, South Chungcheong, and Busan - to care for their young children, a large majority of working fathers were still unwilling to opt for time off.

An overwhelming 78 percent of men surveyed said they would not take leave for child care even if they were allowed by law. Reasons cited included concerns about the company being unhappy with their personal choice (53.1 percent), economic reasons (31.5 percent) and worries about being sidetracked in career track within the company (10.3 percent).

Meanwhile, working mothers said some of the hardest aspects of juggling a job, child care and household work included inability to care for a child when he or she is sick due to inflexible holiday policy at work (51.1 percent), having to handle child care and household chores with little help from the spouse (35.6 percent) and having to put a very young child at day care (33.1 percent). Thirty-one percent of respondents also cited not having enough time to look at children’s school work (31.1 percent).

Multiple choices were allowed in this section.

According to Statistics Korea, the employment rate among young Korean women between ages 25 and 29 went from 49.1 percent in June 1999 to an overwhelming 68.1 percent as of April this year. This is a seemingly compelling sign that women are playing a more active role in Asia’s fourth-largest economy.

But looking into the 30 to 39 age group, when women are most busy with their young or growing family, the employment rate went from 52.2 percent to 56.2 percent during same period. Financial motivation was the No. 1 factor keeping working mothers at their jobs, the survey showed.