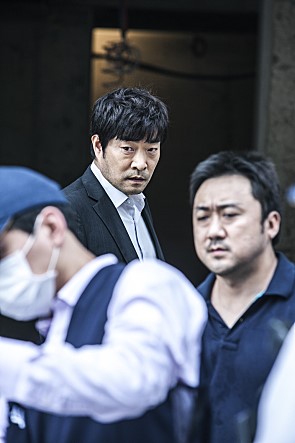 Baek Woon-hak’s crime thriller “The Chronicles of Evil” opened in first place at Korea’s box office. Provided by the distributor

After three weeks at the top of the Korean box office, Marvel’s “Age of Ultron” surpassed the 10 million admissions mark on Sunday, according to the state-run Korean Film Council.

Although it gave away its box office top spot to the newly released local crime thriller “The Chronicles of Evil” over the weekend, the strong sequel was still able to reach the milestone 25 days after its release.

It has now became the fastest foreign movie to achieve the record previously maintained by James Cameron’s sci-fi film “Avatar.”

Meanwhile, Baek Woon-hak’s thriller, “The Chronicles of Evil,” opened in first place with an audience numbering 732,974.

Closely following the emotions of Choi Chang-sik, who has to investigate a murder case in which he is the inadvertent culprit, the film is full of suspense and thrills.

Veteran actor Son Hyun-joo plays detective Choi, who has to keep a critical secret to himself while being threatened by an anonymous man who constantly reminds him he knows the truth.

One of his loyal followers, Dong-jae (Park Seo-jun), eyeing him suspiciously does not make anything easier.

During a press event early this month, the 49-year-old Son said the filming process was a “lonely fight of his own” because he had to rely on delivering complex emotions exclusively through facial expressions since detective Choi is an unexpressive character with much to hide.

Amid a string of positive reviews regarding its full-fledged action scenes and sublime depiction of battles in the Namibian desert, the reboot attracted 708,321 moviegoers during the weekend, making 7.1 billion won.

Due to its partial release in 3-D and at IMAX theaters, where the ticket prices are higher than ordinary theaters, the film garnered higher sales per person.

Noah Baumbach’s funny yet heartwarming movie “While We’re Young” opened in the seventh slot with 22,614 admissions.

Starring Ben Stiller and Naomi Watts as a middle-aged couple who strike up an unusual friendship with a younger pair of hipsters played by Amanda Seyfried and Adam Driver, the film provides both comedic moments - like when the older couple try to embrace youth culture - and some bitter truths about what getting older means.

It has made 240 million won in Korea so far.