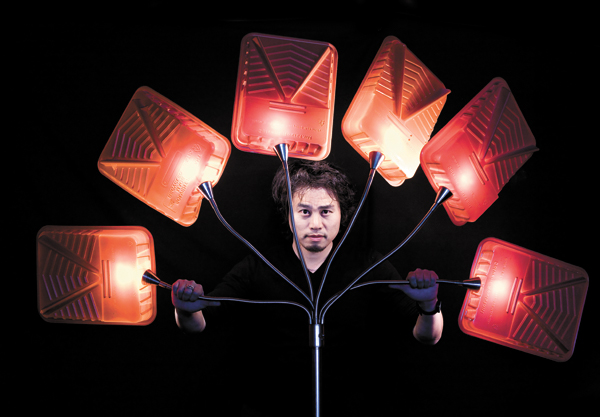 Professor Bae Sang-min is standing behind the lamps he created, which he made in New York using recyclable materials. According to Bae, the habit of writing down ideas leads a person to think. He says that one thought will lead to another, which will eventually turn into an idea. By Kwon Hyuk-jae

The 43-year-old left his life as a prestigious inventor and professor at the city’s Parsons School of Design to become a lecturer at the Korea Advanced Institute of Science and Technology (Kaist) in Daejeon, where the JoongAng Ilbo sat down with him for an interview.

That same year, Bae opened the design research institute ID+IM (I Think, Therefore I Design) at the Korean university. Two years later, he began taking part in the Nanum Project, where profits from an innovative design chosen annually by international charity World Vision are given to help children from low-income families.

New York is where Bae started his illustrious career. After attending Parsons, one of the most prestigious design colleges in the world, he worked on inventing products at well-known companies Smart Design Inc. and Deskey.

Thanks to his talent and creativity, he was able to come up with various innovations that surprised the world. Based on his experiences exploring the nightclubs of New York, Bae made the Sound Pump, an audio system that emits different lights and colors depending on the volume and rhythm of the sounds it plays.

Parsons chose the design as the best graduate work of its kind that year.

It was then picked to represent the school at a competition run by the Industrial Designers Society of America, where it won first place.

Over the course of eight years, Bae won 47 design awards for his endless efforts and talent, including one for a mosquito repellent that works based on ultrasonic waves, and “D’light,” a lamp that can freely transform its shape.

In the midst of his achievements was Bae’s alma mater making him their youngest ever professor - and the first Asian individual to work in such a role at the college - when he was just 27 years old.

The following are edited excerpts from an interview with the designer.


Q. Have you always wanted to be a designer?

A. I saw a jazz dance performance for the first time in Daehangno, central Seoul, when I was in my first year of high school. That was it for me. When the performance ended, I followed [the performers] all the way to their practice room. After seeing how passionate I was, a stage producer asked me to jump. I did as I was told and my head bumped the ceiling. I was then told I had a talent and it was recommended I do ballet. As a result, I wanted to become a ballerino. I told my parents that I wanted to become a dancer, but they disapproved of my dream. 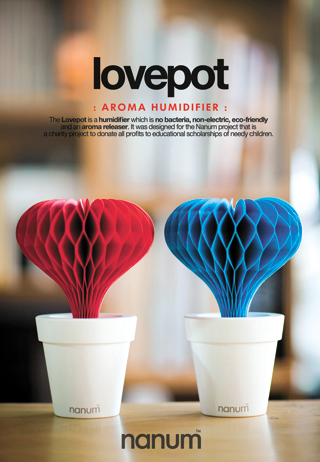 The heart-shaped Love Pot Humidifier is one of Bae Sang-min’s works that functions without using electricity. [JoongAng Ilbo]

At university I majored in English Literature, which I had no interest in, so I joined a photography club. After I finished my first year, I went to serve in the military [a compulsory duty for every Korean man].

One day, when I was out on vacation, I found out that Parsons was holding a briefing session. Since I was interested in photography, I attended the event. All the attendants were students of prestigious design schools and they handed in well-made portfolios, which all seemed excellent. I just made a portfolio based on my thoughts. At the end, however, I realized I was the only one to get into Parsons.

Why were you the only one accepted?

The works of students majoring in design tend to be very similar. For me, however, I never learned to draw, which set my designs apart from the rest.

I realized this myself when I became a professor at Parsons. Parsons selects students based on two conditions. The first is being different. Students should see, think and express themselves differently from ordinary people so that there can be something unique. The second is excellence. The work of the students should be different, but in a good way, not a bad way.

How was life at Parsons?

I went to New York in 1993 to attend Parsons. At first I had difficulty adjusting to a new culture. After talking to local students, I felt dampened because the depth of their cultural knowledge was incomparable to that of mine.

For example, when I told my friends in Korea that I liked the director Oliver Stone, they thought I knew something. But that didn’t work at Parsons. I had to discuss producers and works I never heard of before.

In order to overcome my deficiency, I went around all the streets and clubs to learn the culture. I observed the underground culture along with cutting-edge designs. Later on, I became so knowledgeable about New York culture that even New Yorkers approached me to ask about some of the hot spots in the city.

Also, most Korean students went to Korea during the holidays, but I didn’t. I found a foreign friend who had similar tastes as me and we went to all the places that we could go in New York. I believe all the time I spent wandering around New York eventually helped me absorb the culture. 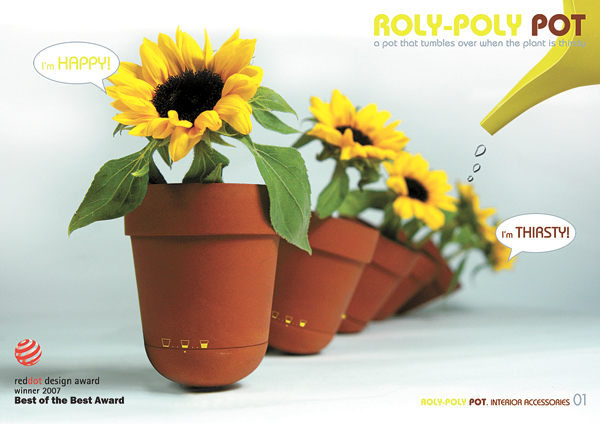 Bae Sang-min’s Roly-Poly pot falls over when it does not have enough water inside. The principle behind this innovation is that if there is not enough water inside the pot, it cannot sustain its own weight, and, as a result, falls down.Provided by ID+IM Laboratory

How did you become a professor when you were only 27 years old?

After Sound Pump received public spotlight, the number of newly enrolled students at Parsons multiplied. The school told me that this happened because of me, so they offered me the professorship to make me take responsibility for what I did.

At Parsons, professors teach at school while working as designers. Marc Jacobs and Donna Karan did the same.

How are you so creative?

I started writing a journal when I was a freshman. Since then, I have written 23 volumes.

The journal I write, however, is a little different from an ordinary diary. In my journal, which I carry everywhere, I write ideas and draw designs whenever something pops up in my mind.

In order to be different and creative, I always ask myself the question, ‘What if?’ For example, let’s say I went to Starbucks. After seeing the coffee shop’s interior design, I ask myself the ‘What if?’ question. I imagine how I would design the place if I were the designer of Starbucks. In addition, when I watch the opening ceremonies of the Olympic Games and the FIFA World Cup, I also imagine how I would design them.

Does this mean that the root of your creativity and keen insight is your journal?

That’s right. I always ask freshmen to keep a journal. By the time they graduate, only two to three students out of around 30 continue with their journals. To designers, the journal is an idea bank that gives them endless creativity. For me, the journal is my No. 1 treasure.

Why did you leave the world-famous Parsons and come back to Korea?

I was working as a professor of the highly renowned design school and also for a prestigious design company.

My working hours started and ended from 9 a.m. to 5 p.m. and I attended parties in the evening. It was an ideal life that many people dream of since my salary was pretty high, too.

However, I was frustrated with my life because all I did for a living was continuously create beautiful rubbish. I had to create new designs that attracted customers. But all of the designs were items people got tired of after six months.

Despite knowing this, I had to repeat the same pattern because that is how a company can sell its products and because that was what I did for a living. To break the repetitive cycle, I truly wanted to create a luxury brand because it lasts. In reality, though, I was making short-lived designs.

While experiencing these thoughts, I received an offer for a professorship from Kaist, so I took it.