Kerry refers to Thaad in Korea on Seoul visit

Kerry refers to Thaad in Korea on Seoul visit 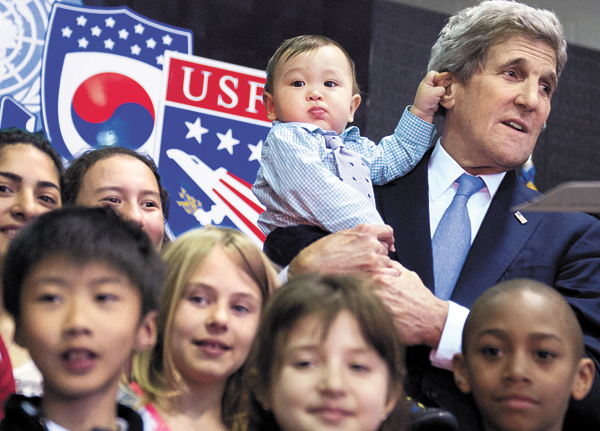 U.S. Secretary of State John Kerry for the first time in public referred to the deployment of the Terminal High Altitude Area Defense (Thaad) system on the Korean Peninsula, a highly sensitive issue linked to both regional security and diplomatic tensions, during a Seoul trip.

Despite a myriad of concerns about placing the U.S.-led anti-ballistic missile system in Korea - including cost and whether it will work against North Korean missiles - there are calls from within the ruling Saenuri Party leadership for an official discussion on Thaad, and some say it should be at the top of the agenda when President Park Geun-hye visits Washington in June.

On Monday, during a visit to the Yongsan Army Garrison in central Seoul, his last stop before heading back to Washington, Kerry addressed the subject of North Korean leader Kim Jong-un’s engaging in “provocative activities, building nuclear weapons against all of the UN conventions.”

He told troops, “And nobody quite knows what a reckless person like this fellow will do .?.?. which is why we redeployed some ships and forces, and why we’re talking about Thaad and other things today.”

The official position of both Washington and Seoul is that there are no discussions on the issue nor any formal calls for discussions for the placement of the advanced missile defense system in Korea.

Kerry held a joint press conference with Minister of Foreign Affairs Yun Byung-se earlier Monday in which he touched upon key bilateral and regional issues in a statement and answers to reporters’ questions. He underscored there is “no daylight” or difference of opinion between the allies in dealing with North Korea and that the two countries’ relationship is “stronger than ever.”

The secretary of state addressed Seoul and Tokyo’s tensions over history issues, and said he recognized that “the trafficking of women for sexual purposes by the Japanese military during [World War II]” was “a terrible, egregious violation of human rights.”

He also delivered a handwritten thank-you letter addressed to Saenuri Party Rep. Chang Yoon-seok for assisting U.S. Ambassador to Korea Mark Lippert when he was attacked by a radical activist in March, incurring injuries on his face and hand.

Throughout his two-day trip, Kerry did not speak on the Thaad issue until he reached the Yongsan base, which fed gossip and speculation that there are behind-the-scenes discussions about the deployment of a battery.

The Korean Foreign Ministry later clarified in a statement that there had been no talks between Foreign Minister Yun Byung-se and Kerry on the issue of Thaad deployment, and that “we’re talking” referred to “internal discussion among U.S. officials,” not between Seoul and Washington.

Na Seung-yong, a Defense Ministry spokesman, said Tuesday that Kerry’s remarks “come in the context of efforts toward peace and security in the Korean Peninsula,” amid North Korea’s nuclear and missile threat.

Gen. Curtis Scaparrotti, commander of the U.S. Forces Korea, on Tuesday said in a Seoul forum that the two sides are individually reviewing the Thaad deployment issue and that “eventually” there will be discussions between Korea and the United States.

In the Far East Forum, Scaparrotti pointed out that “the North Korean threat has changed and it will continue to change, highlighted by its claimed SLBM [submarine-launched ballistic missile] development.”

Last June, Scaparrotti said that he recommended to Washington the deployment of the Thaad system to South Korea, the first time a U.S. military officially publicly addressed the issue.

The Thaad battery is intended to defend South Korea from possible nuclear and missile threats by North Korea and intercept them. It is designed to shoot down missiles closer to their point of origin than South Korea’s current missile defense system.

However, the placement of a Thaad battery here has been controversial, as it comes with a radar system that can reach more than 1,000 kilometers (621 miles). Both China and Russia say it is against their security interests and may be used as a method of surveillance against them. Aside from the radar issue, analysts say, China doesn’t want a more powerfully equipped ally of the United States as its neighbor.

But Rep. Yoo Seong-min, the Saenuri Party’s floor leader, said Tuesday that the placement of the Thaad missile defense system in Korea should be “top on the agenda” in Park’s upcoming summit with U.S. President Barack Obama in Washington in June.

At a meeting of Saenuri leaders at the National Assembly, Yoo said, “Starting from last year, key officials from the U.S. State Department, Department of Defense and U.S. Forces Korea have referred to Thaad and missile deterrence.”

He said a situation in which the Korean government continues to maintain the “three nos” - there has been no request, no consultations and no decision - on the Thaad issue, “is not a normal one for the Korea-U.S. alliance.”