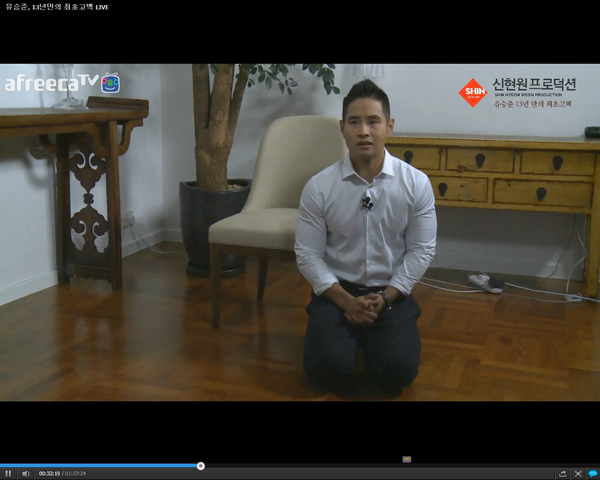 Singer and actor Yoo Seung-jun is seen kneeling to apologize at the start of an interview Tuesday night for evading military service in 2002. Serving in the Army for a period of time is mandatory in Korea. [Screen capture from AfreecaTV]

Singer Yoo Seung-jun’s career was at its height in the late 1990s and early 2000s. He was seen as a passionate, wholesome and honest guy - until he became Korea’s No. 1 enemy overnight in 2002.

That year, the Korean-American singer received U.S. citizenship and ended up avoiding military conscription in Korea. Many Koreans were furious, as Yoo had said publicly that he would serve his duty.

Currently, all able men in the nation are expected to spend 21 months in the military.

In light of public sentiment, Yoo was banned from stepping foot on Korean soil upon the request of the Military Manpower Administration. 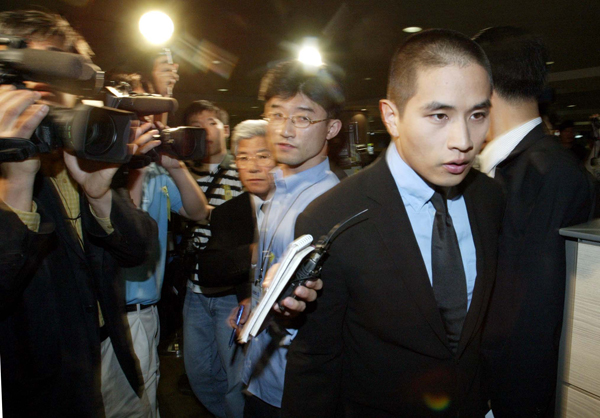 Yoo has been denied entry to Korea since 2002, but an exception was made in 2003 for him to attend his father-in-law’s funeral, as seen in the file photo. [JoongAng Ilbo]

The ban is still effective.

Thirteen years later, Yoo gave his take on the story on Tuesday night on online broadcaster AfreecaTV, live and allegedly unscripted, from Hong Kong. The 38-year-old, who has been pursuing an acting career in China in the meantime, pleaded with Koreans to understand that there is more to the tale than meets the eye and asked the authorities to allow him to enter Korea.

“I was supporting the livelihood of my family and the contract period with my agency remained,” Yoo said when asked why he decided to acquire U.S. citizenship and not complete conscription. He explained that his father persuaded him not to, telling him that it would be selfish of him to carry out Army duty.

Yoo then blamed the media when asked why he said that he would serve in the military in the past.

“A journalist staking out the front my house asked me one night if I would go into the military, and I said yes I would,” Yoo explained.

According to the singer, the journalist also suggested that since the singer is so fit, he should serve in the Marines, and Yoo again replied positively. The next day, media reports surfaced saying that Yoo would enlist in the Marines.

Although not necessarily the Marines, Yoo said he would have had every intention of entering the military if his father hadn’t convinced him not to.

The singer added that he would definitely serve if he could go back in time.

Besides the fact that his so-called confession Tuesday mostly revolved around how the media is partly to blame and that he had little choice due to his family and agency, the timing of Yoo’s interview is receiving criticism.
y
The oldest a Korean man can be to serve in the military is 38 - an age Yoo turned last December.

If the interview had been done six months ago, he could still have become a conscript.

When asked why it has taken him until now to open up, Yoo said his ego didn’t allow it until last year. He added that he told Korean authorities he would like to become naturalized and go into the military last July. However, he said, the age limit only applies to those born after 1980. For those born in the 1970s - like Yoo - the age limit is 36.

Although there are some voices asserting that Yoo has paid enough for his past mistakes over the last 13 years, others still say his confession is not good enough.

“I found it ridiculous,” said Kim Hyeong-moo, an office worker. “Now that he’s at the age where he can’t go to the military, he’s putting on this show and asking to be allowed to enter Korea.”

A poll conducted by Realmeter Wednesday of 500 people ages 19 and older found that 66.2 percent of the respondents said they are against allowing Yoo to enter Korea. Seventy-one percent of that number were male respondents.

After the interview, however, Yoo told Ilgan Sports, a Korea JoongAng Daily affiliate, that he feels the 80-minute live, unscripted session was just not enough to say everything he wanted.

“It was too short to accurately deliver the A to Z of everything in the past 13 years,” he said.

In Korea, avoiding military conscription is extremely frowned upon, and few male entertainers who have done so have managed to recover their reputations.

Three months before his planned conscription, Yoo went to Japan to perform. From Japan, Yoo headed to the U.S., where his family lived at the time, and applied for citizenship.