Risk pays off for ‘Evil’ composer

Risk pays off for ‘Evil’ composer 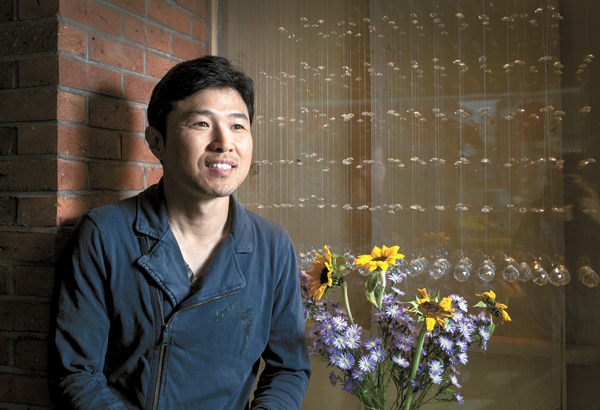 A mid-tempo bluesy song plays midway through the recently released crime thriller “The Chronicles of Evil,” a type of song not usually heard in the genre.

Accompanied by unique female vocals, the explosive score gives the audience time to breathe and focus on the flick’s second half, which is full of yet more suspense.

After the film opened on May 14, the relatively unknown song, “I Can’t Get You Off My Mind” sung by Swedish jazz musician Miss Li, was posted on many Korean blogs, accompanied by comments saying that the scene was one of the most memorable in the movie.

“I like to play a tug-of-war with the audience through the soundtrack,” said Hwang Sang-jun, who was responsible for the film’s music score, in a recent interview with the Korea JoongAng Daily.

“Controlling the pace was my first priority for this crime thriller because, overall, it communicates with the audience with never-ending suspense, and I needed to modulate the flow,” the 43-year-old added.

Hwang is a renowned film composer and music director in Korea who has crafted music for several box office hits such as “Swiri” (1999) “A Dynamite Family” (2014) and “The Pirates” (2014).

His career launched when one of his compositions was included in the trailer for “Swiri.”

Just a year or so later he was recognized for his talent when he won the music director award at the 38th Daejong Film Awards in 2001. After studying film in grad school, he also nabbed the special award at the ninth Mise-en-scene’s Short Film Festival for “The Most Beautiful” in 2010.

He says his fascination for film scores comes from the fact that they allow musicians to experiment with diverse genres. He studied classical music in college for this reason, he explained.

“I’ve liked both music and films since I was very young,” said Hwang.

“Influenced by my parents, who were musicians, I learned the violin for six years while my older brother learned cello.”

His older brother, to the surprise of many, is Hwang Jung-min, one of the nation’s most prominent actors.

“We don’t care that much about what each of us does,” the director said when asked if they have an impact on each other’s careers.

“He tells his story through acting and I do it through my music. But since he is busy featuring in movies, I usually recommend him good films that I watch in my spare time.”

Hwang’s extensive understanding of both film and music has always led him to emphasize a movie’s bigger picture when crafting its soundtrack.

“After studying films, I looked at directors differently and was able to think of how to make movies shine on a different level,” he explained. “I could consider editing and angle when making music too.”

When he first read the script for “The Chronicles of Evil,” the scene where he inserted the track was actually problematic for him.

“Since the before and after sequence of that scene was full of overwhelmingly tense moments, that part was really important to make the audience catch their breath,” Hwang said.

So he started listening to hundreds of foreign songs, until he found the Miss Li track.

But picking a pop song, especially one that has lyrics in it, was risky in many ways.

“I don’t like to use pop songs in films unless I have a specific purpose and intention,” he said. “But there was no other way to carry out my objective with my own composition.”

“The film’s director Baek Woon-hak listened to it twice. First with his eyes opened and then with his eyes closed. After hearing it the second time, he gave me a big hug saying that the pain in his neck has been finally fixed.”

But there was still some criticism.

“Some people worried that it would disturb the film’s flow, especially because it had lyrics, which could mute the character’s lines,” Hwang said. “However, I just couldn’t give up on it because it wasn’t about that specific scene, but was crucial in determining the flow of the rest of the film.”

So the risk was taken and the result has been worth it so far, according to Hwang.

“I feel really great that many people liked the music because it is synonymous with saying that the scene was good as well,” he said. “I am happy that the audience felt the same kind of catharsis that myself and Baek felt. There are people who say they can’t hear the lines, but we both thought that the song itself contained more stories than what the actor was saying.”

He added that he does not have a “single regret” left about this movie.

However, unlike in this case, there were times when Hwang’s ideas conflicted with the director’s, requiring a little bit of persuasion.

“From my own experience, it doesn’t help to talk about the quality of the music” Hwang said.

“We have to approach the director by talking about how the audience will feel when watching it,” he said, adding that in the worst case scenario, the whole concept of the music has to change.

Hwang is currently working on the new film “Himalaya” [tentative title], directed by Lee Seok-hoon, whom Hwang worked with on “The Pirates.”

He says that the film will contain a more classical music score that goes in line with the grandiose landscape of the mountains featured within the flick.

“My favorite feedback is when people say they simply enjoyed the movie. Even if they don’t even realize what music was playing, I feel that I have fulfilled my responsibility as a music director.”