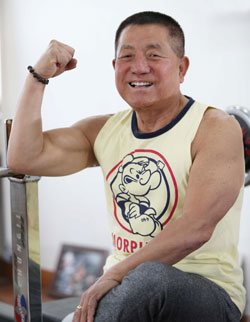 Perhaps one of the most well-known segments in the popular TV show “Stage of Friendship” was the one in which its host would ask his young soldiers, “Are you sure the woman behind the stage is your mother?”

“Yes, sir!” the soldier would answer back. “I’m sure she is my mother.”

And with that, host Lee Sang-yong would prompt the woman to come out, which would inevitably lead to a joyous, sometimes tear-filled reunion between mother and son.

“Stage of Friendship” ended its run in 1997, and was later followed by the similarly military-themed program “Real Men.”

But for Lee, who hosted the show from 1989 to 1996 and was lovingly known as “Popeye,” there was no better chapter.

But there was a time when Lee’s life was a daily struggle. While hosting “Stage of Friendship,” he found himself at the center of embezzlement accusations. But despite later being acquitted, he lost everything and decided to move to the United States with just 200,000 won ($184) in his pocket.

He worked as a tour guide for a time, spending 14 hours a day in a bus. Two years later, he returned to Korea, but with nowhere to go, Lee, then 56, made a living as a temporary worker. Over time, however, he gradually began receiving work proposals again and resumed his life as a motivational speaker.

Q.Do you ever miss hosting “Stage of Friendship”?

A.I miss it so much. “Stage of Friendship” was a television program made with real soldiers, not celebrities. Once confirming the troops that would appear on the show, all the soldiers, from the privates to the commanders, practiced singing, dancing and martial arts for six months. It helped them get acquainted with one another.

If “Stage of Friendship” were still around, it would have undoubtedly helped prevent some of the shootings, suicides and desertion cases the military has been dealing with recently.

You left the show due to an embezzlement accusation.

[At the time], it had been proposed that I run as a lawmaker. But I refused, saying it would be better to live permanently as Popeye than spending four years as a politician. On [the day I turned down the suggestion] while I was recording the show, the lights on stage went out. It ended up being my last appearance on the show, and the media reported that I had embezzled money raised to help children suffering from heart conditions. Despite being acquitted, I lost everything. So I went to America.

You are very popular as a kind of motivational speaker. Would you describe what you talk about?

The main theme of my speech is “Life is Wonderful.” I’m always ready to encourage anyone because I’ve gone through numerous things in my life. It is not all about inspiring stories.