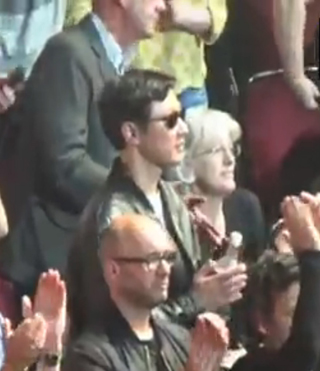 LONDON - Kim Jong-chol, older brother of North Korean leader Kim Jong-un, flew to London to see his rock idol, Eric Clapton. The 33-year old, who was passed over as heir to the throne in favor of his younger brother, went to the Royal Albert Hall to watch Clapton perform two days in a row, Wednesday and Thursday.

Clapton, one of the best guitarists of all time, held a 10-day concert from May 14 to celebrate his 70th birthday at the Albert Hall in London, a venue many musicians dream of playing once in their lifetimes.

It was a must-see for die-hard Clapton fans, and Kim Jong-chol is one of the biggest.

“Kim was found to have traveled to London via Beijing and Moscow,” Japanese TV channel TBS reported, “and it was the first time he appeared in public since Kim Jong-un came to power in 2012.”

The last time he was seen was also at a Clapton performance in Singapore in February 2011, where he was accompanied by 20 other people including his girlfriend and his younger sister Kim Yo-jong.

On Wednesday, Kim was escorted by employees of the North Korean Embassy in London. He wore a leather jacket and shades and arrived at the concert with a woman who appeared to be his girlfriend. On Thursday, embassy employees escorted him to the Albert Hall once again.

Kim enjoyed the shows, chatting animatedly with his companions, and joined in standing ovations when the performances ended.

When asked by reporters about his feelings on the concert and his position in North Korea, Kim did not reply. Some of his companions responded defensively and tried to block photographers.

But Kim Jong-il decided not to bequeath his powers to him allegedly because he considered the son too “soft.” Kim Jong-un, now 32, was chosen instead.

It was rumored that Kim Jong-chol used steroids in 2005 to become more masculine but suffered severe side effects and later ended up using methamphetamines for the pain.

Kim Jong-chol is believed to have arrived in London on Tuesday or Wednesday and stayed at the luxurious Chelsea Harbour Hotel.